Sometimes fashionable and prosperous, sometimes classical and quiet. The imperial historic sites, Hutongs, and the bustling business district have built a classical, modern, cultural, technological, and magnificent new Beijing. As the capital of several dynasties in China, this city has a history of several thousand years. Since ancient times, it has been called a metropolis with developed commerce and prosperous economy. Many skilled craftsmen settled in the area long ago and passed on their skills from generation to generation. We can still find traditional crafts with typical Oriental characteristics in many shopping streets and markets. Choose one or two for yourself or a friend from the antique market or specialty store.

What to Buy in Beijing

To enjoy Beijing shopping, there are many things you can buy. Cloisonne, ivory carvings, jade and lacquer are considered the city's four finest traditional crafts. In addition, antiques, silk, pearls, Snuff Bottles with Pictures Inside and artificial flowers are also worth buying, deeply loved by tourists. All kinds of candied fruit and candies make your mouth water and make great gifts for friends and relatives.

Cloisonne, also known as enamel, is a kind of copper handicraft and one of the best craftworks in Beijing. It first appeared in Beijing during the Yuan dynasty (1271-1368) and prevailed during the Ming dynasty (1368-1644). Cloisonne is a perfect combination of copper and porcelain. It uses copper as the base material, and in some designs, fixing the brass wire to the copper body. The copper wire is then coated with a blue glaze. After experiencing a series of complicated procedures, such as burning, polishing and gilding, cloisonne is finished. The process can be used to make headwear, lamps and lanterns, smoking sets and other items in various shapes and sizes. It is one of the best souvenirs for tourists.

Ivory carving has a history of 3,000 years in Beijing. Skilled and imaginative craftsman brought the ivory new life with their knives. It is an exquisite handicraft and people love it at first sight. In ancient times, Chinese emperors regarded ivory carving as a royal tribute. Today, Chinese leaders send ivory carvings to many foreign friends. With demand for ivory in short supply and fewer young artisans, ivory carving may soon become a lost art.

As one of the best craftworks in Beijing, jade has been regarded by the Chinese as the king of precious stones for more than 5,000 years. It is considered an auspicious thing, representing goodness, holiness and preciousness. In ancient times, people wore jade to show their social status. There are many places with abundant jade resources in China, such as Hetian in Xinjiang province and Youyan in Liaoning province. There are also a lot of craftsmen with superb skill and exquisite craftsmanship. The Jade vases, statues, birds, animals and flowers are all well made and lifelike.

There are two kinds of lacquer in Beijing: carved lacquer and inlaid lacquer. They are all extracted handicrafts with strong folk art characteristics, praised by people from all over the world. In the great hall of the people, Diaoyutai state guesthouse and many other important halls, large lacquer works are placed.

Dough figurine is a simple folk handicraft with high artistic quality. It has a history of more than 1,340 years. The vivid dough figure was made by skilled craftsmen from the sticky rice dough mixed with pigment, honey and alkene. After cutting, slashing, pinching and twisting the dough, a lifelike child, beautiful girl or other figures are made in the blink of the eyes. On the city's exhibition streets, you can witness artisans making dough figurines, and you will be amazed at their skills.

Beijing roast duck is probably the first thing most people think of when they come to Beijing to bring a gift. Beijing roast duck can be purchased at the drive-through Windows of old brand chain stores such as Quanjude and Bianyifang, where the roast duck is vacuum-packed on site and some packaging fees will be charged. In addition, you can also buy it in all kinds of large supermarkets, which have a wide variety of brands of Beijing duck and the price is slightly different. Souvenir shops near the railway station may have higher prices, and the brand is not guaranteed. Vacuum-packed roast duck needs to be heated and processed when it is eaten. You can learn processing methods online to avoid wasting food materials.

Beijing candied fruit, also known as Beijing style preserves, comes from the imperial kitchens. There are thousands of varieties including preserved apricot, pear, begonia and so on. Beijing candied fruit is made by raw material handling, boiled with sugar and dried, turning to brown, gold or amber color, bright and transparent, slightly sticky, and with water content below 20%. It is available in major supermarket chains and specialty supermarkets in Beijing.

Tuckahoe Pie is a kind of nourishing traditional famous dim sum of Han nationality produced in Beijing. The making of Tuckahoe Pie is the pancake made of Tuckahoe frost and white flour, then sandwiched with honey and preserved fruit. Tuckahoe is a kind of fungus that grows in pine root, has the functions of clearing damp and promoting diuresis, strengthening the spleen and stomach as well as calming the heart and tranquilizing the mind. But it's not good to eat too much.

Beijing crisp candy has a long history of production, the earliest from the Tang dynasty. It is one of China's three famous sugars, and the most famous one is red shrimp crisp candy. It is available in major supermarket chains and specialty supermarkets in Beijing.

Erguotou is the traditional liquor in Beijing. It is a type of Baijiu(white spirits) made from sorghum. Drinking Erguotou is like drinking Douzhir(a fermented drink made from ground beans), which is an expression of the flavor of Beijing. When eating Beijing snacks, you can drink some Erguotou to add to the fun.

Beijing Ruifuxiang traditional Chinese silk store was opened in 1893(the 19th year of Qing Guang Xu), which is a time-honored brand with a good reputation both at home and abroad. Ruifuxiang mainly engages in silk cloth, wool fabric, cotton cloth, Chinese-style costume and production. On the eve of the founding of the People's Republic of China, Chinese premier Zhou Enlai designated "Ruifuxiang" to make the first national flag of the People's Republic of China - the Five-starred Red Flag.

Where to Buy in Beijing

Beijing has a very diversified shopping environment. From small commodities to luxury goods, people of all levels of consumption can find satisfactory shopping places here. For tourists, the small shops around the scenic spots seem less reliable, and it is more reliable to buy the commodities with the characteristics of old Beijing in specialty stores. For young people, there is no need to think too much. Wangfujing, Xidan, Chongwenmen and Guomao are all good places for shopping. For arts and cultural youth, the souvenir shops of South Luogu Lane and the surrounding area of the Forbidden City are both interesting and meaningful.

The former Dashilan and Qianmen streets are considered Beijing's "Time-honored Brands" streets, because about 100 years ago, this area was one of the most bustling commercial areas in Beijing. Some time-honored brands have become part of the culture of old Beijing, and travelers can not only wander around to feel the lingering charm, but also buy some souvenirs or gifts to take home.

It is the most famous silk and satin shop in Beijing, specializing in clothing customization, silk cloth and some small accessories made of silk cloth. But the price is high, you can buy some small commodities like silk scarf and so on. There are several branches in Beijing.

The most famous old brand of cloth shoes in Beijing. The cloth shoes with strong cloth soles have been made for more than one hundred years. If you want to buy gifts for the elderly in your family, comfortable cloth shoes are also a distinctive gift.

Bu Ying Zhai is an old brand of cloth shoes. Its headquartered is in Dashilan and there are several branches in Beijing. The company sells traditional hand-made strong cloth soles cloth shoes, as well as tiger-head cloth shoes for children. With the progress of The Times, there are some shoes designed very modern. If you are traveling with your elders, you may want to take a look.

The headquarter of Yi De Ge, located in Liulichang, is an old store specializing in the four treasures of the study. For calligraphy and painting enthusiasts, you can find high-quality ink, brush and Chinese art paper here.

Beijing has been a bustling commercial center since ancient times, from large shopping centers such as Shin Kong Place, Joy City and Parkview Green, to Yandai Xiejie street and Liulichang stalls, there is nothing you can't buy, but the endless shopping streets. From Xidan, Wangfujing and Qianmen Dashilan to Xiushui and Sanlitun, get your sneakers and money ready, and start your shopping tour.

Under the imperial city, there are treasures. After the baptism of many generations of dynasties, the imperial capital has left many exquisite, breathtaking antiques, paintings and handicrafts. In addition to seeing these treasures when visiting the Forbidden City, you can also go to Liulichang, Panjiayuan, Yandai Xiejie street and other cultural commercial streets to find out the treasures.

Skewed Tobacco Pouch Street (Yandai Xiejie) is named because the street itself is like a tobacco pouch. Located in the northeast of Shichahai Qianhai, it is a commercial pedestrian street with traditional cultural characteristics. Along the street are tobacco pouches shops, antique shops, clock and watch shops and so on, selling a variety of antique goods. The street starts from Di'anmen Outer Street in the east, in northeast southwest trend. Turning at southwest exit, you can see the Silver Ingot View Mountain, one of the famous eight scenes of Yanjing.

Liulichang cultural street has a history of more than 200 years. It is located in the south Xinhua street outside Hepingmen of Beijing, about 1 kilometer long from the east to west. The whole street looks winding and zigzagging, with primitive simplicity and elegance, reappearing the former charm of cultural street artistically. Lu Xun had visited Liulichang for more than 400 times during his residence in Beijing. Now this is a commercial street that deals in antiques and paintings. It is the most popular street for people who love antique.

Located in the southeast corner of the third ring road in Beijing, Panjiayuan Antique Market is the largest flea market in China. It is open for 4 days from Thursday to Sunday every week, dealing in various cultural relics, calligraphy and painting, four treasures of study, porcelain, wooden furniture and so on.

Baoguo temple is a famous ancient temple in Beijing for thousand years. During the Ming and Qing dynasties, it was the most famous book market in Beijing, many years earlier than Liulichang book market. Now there has been a cultural market operating antiques, books, antiques and ancient coins. Every day, many people come to the market for treasures exploring. 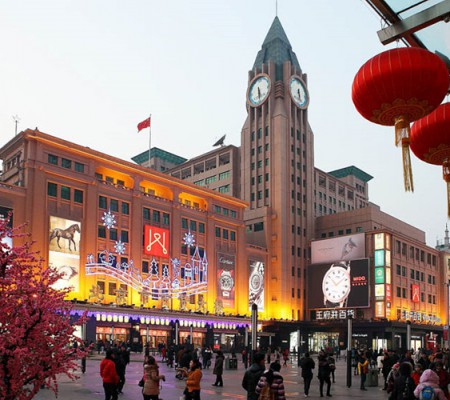 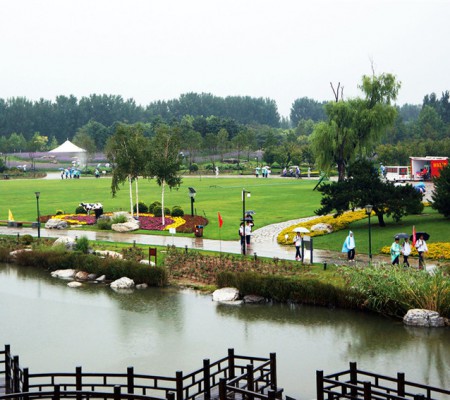