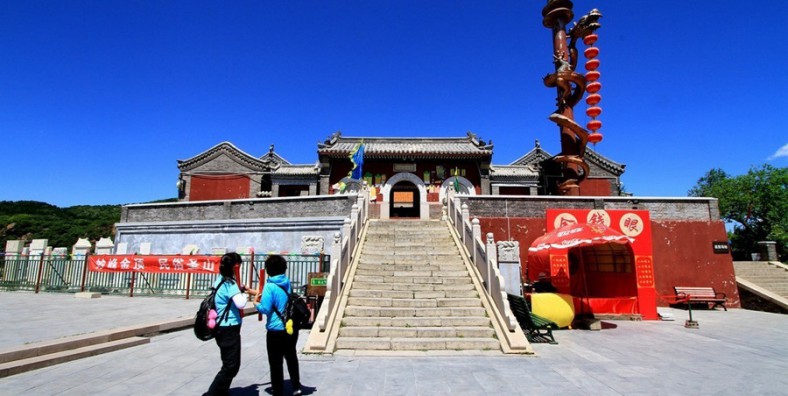 Mount Miaofeng is a mountain in the northwestern Beijing, an extension of the Taihang Mountains. Mount Miaofeng is culturally significant as a site of worship for the Taoist goddess Bixia Yuanjun also known as the "Heavenly Jade Maiden" who is associated with Mount Tai.

Why is Miaofeng Mountain in Beijing so Special?

Mount Miaofeng is a mountain in the northwestern Beijing, an extension of the Taihang Mountains. Mount Miaofeng is culturally significant as a site of worship for the Taoist goddess Bixia Yuanjun also known as the “Heavenly Jade Maiden” who is associated with Mount Tai. Mount Miaofeng is the western terminus of a pilgrimage route from Beijing. The pilgrimage and the temple fair were held during the fourth month of the Chinese lunar calendar.

Where is Miaofeng Mountain in Beijing?

Mount Miaofeng is located in the Mentougou District of Beijing about 70 kilometers to the northwest of downtown Beijing.

Miaofeng Mountain is well known for the old temples on its hilltop, as well as its rock, pine trees and flowers. The most worth visiting is Miao Feng Shan Goddess Temple, or locally called as Niang Niang Miao ( 娘娘庙 ).

The temple was first built in the Liao Dynasty (916-1125), covering an area of 1146 square yards (958 square meters) with the Mountain Gate Palace as the main gate. The main buildings are the linggan hall, the underground storage hall, the Yaowang hall, the Guanyin hall, the matchmaker hall, the God of wealth hall, and the wangsanpo hall. There are five statues of goddess in the hall, among which the Miao goddess, also known as the goddess Bixia, stands in the middle. Three horizontal plaques written by Empress Dowager Cixi (1835-1908) of the Qing Dynasty thanked the goddess Miaofeng and hung in front of the shrine. It is believed that empress Cixi came to this temple to pray for his son emperor Tongzhi, and then he recovered from his illness.

There are five ancient pilgrimage routes, namely Laobei Road, Zhongbei Road, Zhongnan road and Zhongnan Road, which are all concentrated in Jiangkou Village at the foot of Miaofeng Mountain. Along the road, the ruins of tea houses, stone rolls, old gas tanks, cliff stone carvings, etc. are all worth appreciating.

Peach, rose, Rhododendron and other flowers are in full bloom all the year round, of which the most attractive one is Miaofeng Mountain in Rose Sea, which is the “hometown of roses” in China. Rose Valley there and Kazanlak Rose Valley in Bulgaria are the two largest rose valleys in the world. They have good quality, large flowers, thick petals, deep color and high oil content. When thousands of acres of roses bloom on the mountain, a beautiful and charming rose sea appears.
Every year, Rose Festival is held in June, and Peach Blossom Festival is held from late April to early May.