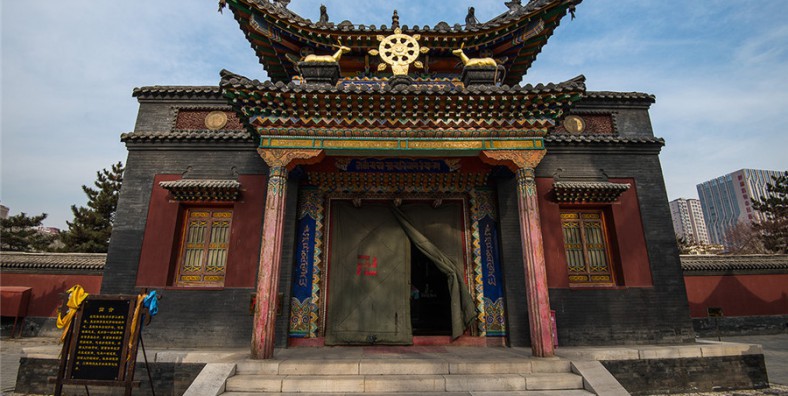 Best Time to Visit: All Year Round

Why is Five-Pagoda Temple So Special?

As there are five small dagobas on the pedestal of the site, it is named Wuta Si. Wuta was originally a building of the temple constructed during 1727-1732. Now the temple has disappeared, but the pagoda has remained. The temple is a massive structure that looks more like a mausoleum with five, minaret-like pagodas atop it than a pagoda or a temple. The temple was initially constructed from 1727 AD and ended at 1732 AD. Five Pagoda Temple stands 16 meters in height, and the main temple complex consists of three parts: the base, the seat and the top.

Five-Pagoda Temple (Wuta Si) is located in the southeast section of Hohhot City, capital city of the Inner Mongolia Autonomous Region. The address of Wuta Temple is No. 48 Wutasi Back Street, Yuquan District, Hohhot, and the temple lies about 5 km from Hohhot Railway Station.

How to Get to Five-Pagoda Temple?

If you want to get rid of hustle of transportation and troublesome navigation, you can book a private tour package which covers visiting, dining and transfer from us. Our local tour guide and driver will escort you to Five-Pagoda Temple with speed and convenience, and take care of all the details. You just need to focus on travel.

The temple is just to the south of Renmin Park (人民公园). You can take bus No.1 or take a taxi to go to there.

What to See in Five-Pagoda Temple?

The design of the Five-Pagoda Temple in Hohhot belongs to the special “diamond throne” pagoda style of Indian Buddhist architecture. Along with 5 other similar Five-Pagoda Temples round about the country, is a copy of the Gaya Temple in India. Pagodas over pagoda, and the green and yellow colored glazes on the short eaves and tops of pagodas. Those make Five-Pagoda Temple quite special, a treasure of Hohhot City.

Among the five pagoda temples, the most valuable thing is the Mongolian astronomical map stone carving on the north wall. The diameter of the astronomical map is 144.5cm. The north celestial pole of the celestial sphere is the center of the circle. The longitude line of the position of the right ascension of the twenty eight constellations is drawn, and there are five concentric circles. From the inside to the outside, there are the Arctic Circle, the summer solstice circle, the equatorial circle, the winter solstice circle and the southern polar circle. It is the only astronomical map marked with Mongolian in the world so far, which has high scientific value.