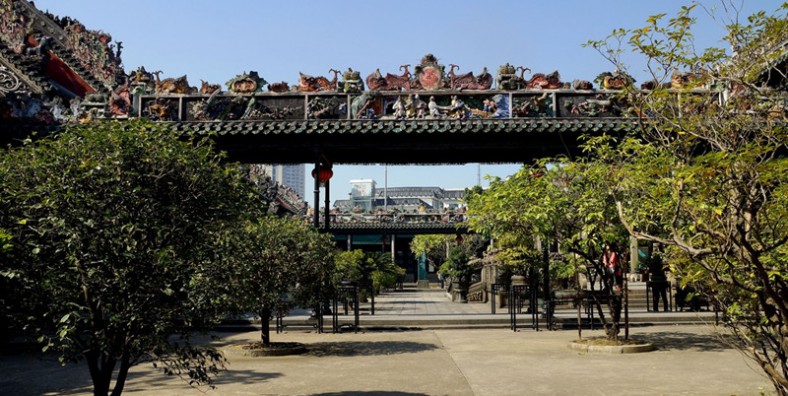 Chen Clan Ancestral Hall with a history of more than 100 years and still in its original shape, now it is the largest, best preserved, and best decorated ancient architecture existing in Guangdong province.

Chen Clan Ancestral Hall was built between 1890 and 1894 during the reign of Emperor Guangxu of the Qing dynasty. It was built with donations of the Chen family then spread in 72 counties in Guangdong province. Now it houses the Guangdong Folk Art Museum. With a history of more than 100 years and still in its original shape, now it is the largest, best preserved, and best decorated ancient architecture existing in Guangdong province.

Where is Chen Clan Ancestral Hall?

Chen Clan Ancestral Hall is located at the No.34, En Longli, Zhongshan 7 Road. It is in the downtown area.

Chen Ruinan and Zhaonan, first proposed raising money from the various Chen lineages to build a temple for worship of their ancestors and an academy to train their clansmen for the imperial examination during the late Qing Dynasty. With money donated by Chens abroad and in 72 of Guangdong’s counties, the hall was finished in 1894. When the imperial exam was abolished in 1905, the academy became a practical school for members of the clan. The hall now serves as the Guangdong Folk Art Museum.

The Chen Clan Ancestral Hall consists of 19 buildings with nine halls and six courtyards which are connected by corridors and ride north to south in a symmetric pattern. On the main axis lie the Head-entrance, the Gathering Hall and the Back Hall. It is interesting that the structure was built in such a traditional manner at a time when building going up in commercial cities in the south often had a Western architectural style.The building features intricate wood carvings inside, and polished wooden rafters. The building was also a shrine to worship the Chen family ancestors, and it looks much like a southern Chinese temple shrine.

How to get to Chen Clan Ancestral Hall

If you want to get out of the traffic and hassle of navigation, you can book a private tour package that includes visiting, dining and transfer from us. Our local guide and driver will escort you to the Chen Clan Ancestral Hall and most convenient way and take care of all the details. You just have to focus on the visiting.

Subway
You can take Line 1 to the Chen Clan Ancestral Hall Station. Line 1’s first station is at the Guangzhou East Station in Tianhe District.

Nearby Attractions in Guangzhou