In China, train is an important mode of long-distance travel. According to the “Railway Construction and Development Plan” issued by the National Development and Reform Commission, the total mileage of railways in China is expected to reach 150,000 kilometers by 2020. China’s railways are among the busiest in the world and more travelers choose to travel China by train.

Development of Railways in China

Before People’s Republic of China

China has railways since the end of the Qing dynasty. However, the Qing government was corrupt, conservative and autocratic, and refused to accept new things. So it stubbornly refused to build railways. On July 3, 1876, the first railway appeared in China, Woosong railway – a 14 km railway from Shanghai to Woosung (modern Shanghai’s Baoshan District). It was dismantled one year later due to without the approval from the Qing government. Before 1895, the government remained hostile toward railway construction. After that, the government began offering railway concessions to foreigners and allowing direct links to the capital Beijing.

The first railway to be indigenous-designed and -constructed in China was the Beijing-Zhangjiakou railway, built between 1905 and 1909. By 1911, 5,600 miles of railway lines had been completed. During the republic of China period from 1912 to 1949, the development of China’s railway network slowed due to needy and war time. Most of the lines are concentrated in northeast China and coastal areas, with only 6 percent extending to other areas.

After People’s Republic of China

After the founding of the People’s Republic of China,  the new government under Mao Zedong significantly invested in the railway network. In 1949, a total of 8,278 kilometers of railway lines were restored. By the end of 1949, China had 21,810 kilometers of railways in operation. From the 1950s to the 1970s, the railway routes, especially in western China, were expanded. In southwest China, where the terrain is rugged, several mountain railways have been built, such as the Baoji-Chengdu railway, built in the 1950s, and the Chengdu-Kunming railway, built in the 1970s. The railway to Tibet, one of the highest in the world, was finally completed and opened to the public in 2006. Today, with the exception of Macao, every provincial entity in the People’s Republic is connected to the railway network.

Code for Design of Railway line (1975) : According to the regulations, the classification of new railways and reconstructed railways (or sections) shall be determined according to their role in the railway network, their nature and the long-term passenger and freight volume. China railways were divided into three levels, namely, Ⅰ level, Ⅱ level, Ⅲ level.

On April 18, 2004, China railway increased its speed for the fifth time. After five times’speedup, some sections of the road opened a direct train, so that the journey time again shortened.

By the end of 2018, China’s railway mileage had reached 131,000 kilometers, ranking first in Asia and second in the world. The eight vertical and eight horizontal lines are the short-term plans for China’s high-speed rail network.

In China, train is an important mode of long-distance travel. China’s high-speed railway network is by far the longest and the most comfortable HSR in the world. Convenient railway network in China boosts train travel greatly. Traveler who like different landscapes must try to travel by train in China, because you will surprise by the drawing on the windows of the train. See below popular China train routes or contact our consultant to tailor-make your amazing China train tours!

China National Railway Group Co., Ltd. (hereinafter referred to as “China Railway Corporation”) is a wholly state-owned enterprise approved by the State Council and established by the Central Government... 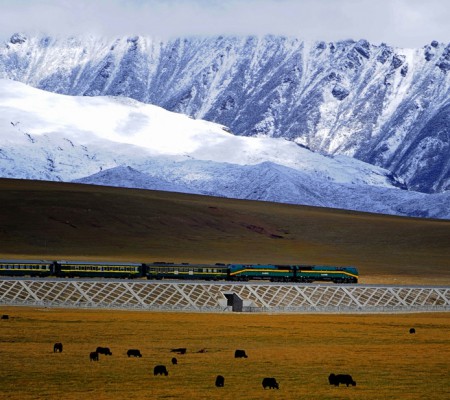