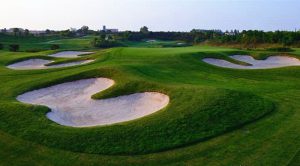 The club is located in the north of the Fifth Ring Road, the south of Qinghe River, the west of lincui Road, and the east of Badaling Expressway. The stadium has convenient transportation and four connections with the eight universities. You can drive from Anli Road, Badaling Expressway and lincui road of the Fifth Ring Road, which is 10 minutes away.

Charges are as follows：( Nine holes take about two hours )

The summer palace, the imperial garden of the Qing Dynasty in China, formerly known as Qingyi Garden, is located in the western suburb of Beijing, 15 kilometers away from the city, covering an area of about 290 hectares, adjacent to the Yuanmingyuan Garden. It is a large-scale landscape garden built on the basis of Kunming Lake and Wanshou mountain, based on the West Lake of Hangzhou, and drawing on the design techniques of Jiangnan gardens. It is also the most complete royal palace imperial garden, known as the “Royal Garden Museum”, and also a national key tourist attraction.