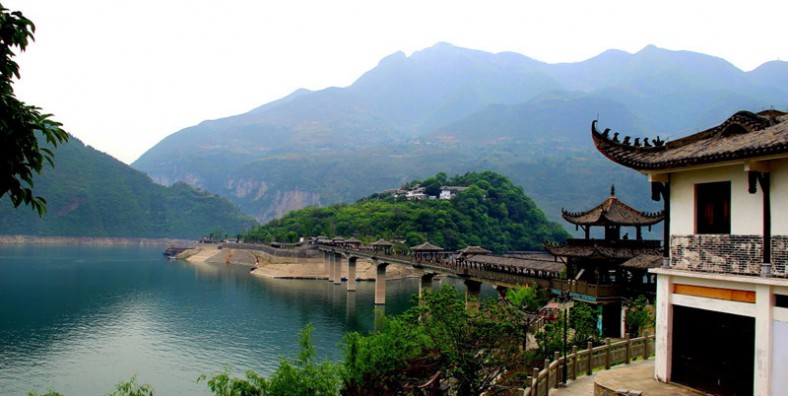 White Emperor City was firstly called Ziyang City, and during the late West Han Dynasty, Gongsun Shu (公孙述) with ambition set up his separatist regime in Sichuan and he wanted to be emperor. Gongsun Shu later heard that in the city there was a Crane Well, where often come up to a white mist, its shape is like a white dragon. Gongsun Shu has deliberately mystifying and said it was “white dragon come up the well” that it would be a sign that he ascended the throne and became dragon (emperor) in the future. Then, he called himself White Emperor, and found the capital here. And the Ziyang city named “White Emperor City” accordingly; this mountain also renamed “White Emperor Mountain”.

The giant spacious palace was built during Ming Jiajing period 11th year (1532 AD). Inside the palace there consecrates color statues of Liubei, Guanyu, and Zhangfei, which tells the super outstanding carving skills of ancient Chinese people. Mingliang Palace (明良殿) was originally built for memorizing Gongsun Shu who had brought good and peaceful life to local people during the chaos years. However, till the Ming dynasty, it turned to be the shrine for Liu Bei, Guan Yu, Zhang Fei, and Zhuge Liang.

Guanxing Pavilion or Observing Star Pavilion is at the yard outside of the Tuogu Hall, also in front of the Wuhou Temple at White Emperor City. Constructed with 6 cornices and 12 pillars, the pavilion looks extraordinary and imposing. It is said that when Zhuge liang led troops to Sichuan, he looked at stars, used astrology, and thought fighting strategy, so the Guanxing Pavilion (stargazing pavilion) gained this name.

East and west stele forest is on both sides of Mingliang Palace and Wuhou Temple respectively. In the two stele forests at White Emperor City, you could stroll to appreciate over 70 outstanding works of various calligraphic scripts.One of the most famous is two pieces of steles in Sui dynasty of more than 1300 years. One is the Epitaph Long Gong Mountain, another is Jinlun Temple Dagoba Tablet. All those great works show the brilliant culture and high standard skills of Chinese people in the past centuries.

How to get to White Emperor City

If you want to get out of the traffic and hassle of navigation, you can book a private tour package that includes visiting, dining and transfer from us. Our local guide and driver will escort you to the White Emperor City and most convenient way and take care of all the details. You just have to focus on the visiting.

Take a bus from Chongqing North Station South Square bus station to Fengjie, about 5 hours. Then take bus No. 402, 403 in Binjiang international of Fengjie County to Baidi city station to reach the scenic spot.

Nearby Attractions in Chongqing