Cangyuan, which with pleasant weather and many trees, is a city where you can walk in the famous cliff painting valley to appreciate the mysterious culture which is handed down by the ancestors of Wa. This tour offers a chance to visit the Wengding Village to taste excellent alcohol and experience the unique, extensive and profound culture of Wa ethnic group as well. 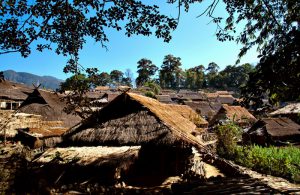 Take the flight to Lincang City, after landing, drive about 4 hours to Cangyuan County, it is a long driving but very nice scenery on the way. Firstly drive to Shuangjiang Lahu, Va, Blang and Dai Autonomous County, visit the Dai, Va, Lahu and Bulang ethnic villages on the way.

Shuangjiang Dai, Bulang and La is a multi-minorities county in the border city Lincang. The 453,705 members of China’s Lahu ethnic group live primarily in Yunnan’s Lancang Lahu Autonomous County and neighboring counties such as Menglian, Shuangjiang, and Simao. This region is also home to Hans, Dais, Yis, Hanis, Blangs, and Was.

The Lahu trace their ancestry back to the ancient Qiang people, who immigrated to present day northern Yunnan from northwestern China early in the third century AD. 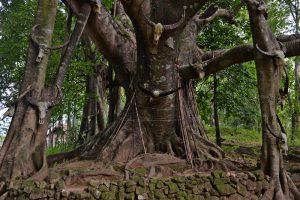 Beginning in the 8th century, the emergence of the Nanzhao State forced the Lahu to move further southward. After the 10th century AD, they continued this southward migration on a larger scale. As the Lahu migrated, they divided into two groups: the “Lahu Na” (White Lahu) who took the western route, settling down in the Lincang, Lancang, Mengbian and Menggai area, and the “Lahu Pu” or “Lahu Xi” (Yellow Lahu), who took the southern route, along Ailao Mountain, and made their home in the area near Jindong, Simao, Mojiang and Yuanjiang. By the end of the 18th century, the Lahu had already inhabited in the areas in southern Yunnan they live in today.

Arrive in Cangyuan Wa Autonomous County in the afternoon, after dinner, enjoy the Bonfire Night Carnival in Monihei Square in the downtown.

Enjoy the “Monihei Carnival” this day.

Wa is an age-old and mysterious minority with strong people. And the people there have worked hard for more than 3000 years and have created its unique glorious culture. As one of the only two Chinese Wa autonomous Counties, Cangyuan County in southwest China’s Yunnan province has 3000 year-old cliff painting, Nangunhe Nature Reserve, highly-protected original ecologies and abundant animal and plant resources.

It is said this festival takes its meaning from the custom that the people smear the pot ash, ox blood and mud on other persons’ face to frighten the evils and seek peace. The players can use natural paints to smear each other and pray for each other. As a traditional custom of the minorities in China, “Monihei Carnival” has attracted a lot of tourists both from home and abroad, creating a total income of 100 million from the tourism industry.

Drive back to Cangyuan after lunch and enjoy the activities of the Monihei Carnival including Folk Creation Song and Singing Contest, Traditional Bullfighting Competition,Steeplechase of Monihei Carnival and so on.

In Monihei Carnival, you can not only experience the joyful atmosphere which is full of ethnic features, but also can appreciate the various cultures and the natural and beautiful scenery in Cangyuan.

–The wooden drum dance is an indispensable dance in traditional sacrificial activities of the Wa Minority in China. The dance, led by a sorcerer, is performed throughout the sacrificial rituals held in the twelfth month of the lunar calendar each year.

The wooden drum is a “divine instrument” handed down from one generation to another among the Wa people. It is regarded as the source of the procreation of the Wa Minority. According to the Wa legend, in the beginning of the creation of the world, a huge flood almost engulfed all lives on earth, but the Wa people’s ancestors were saved by the god with a wooden tank. So the Wa people survived till this day. Since then, the wooden tank has been worshiped with the ultimate piousness by the Wa people.

The two-meter-plus-long wooden drum used in the dance symbolizes the tank. In sacrificial dances, the wooden drum gives out low and deep sounds, with clear and melodious rhythms from time to time, providing ideal accompaniment.