The beguiling Tianjin packs a unique aura where East meets West. This 3 Days Tianjin Highlights Tour takes you to explore the the promenade-friendly river, European-flavored neighborhoods and rich Chinese culture of this coastal metropolis, also the former concession port city. 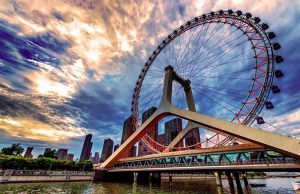 Start with a relaxing visit to the Tianjin Eye which is a 120-meter tall giant ferris wheel built over the Haihe River. Not being as famous as the London Eye, but it is the only ferris wheel in the world built on a bridge, providing an interesting 30-minute ride in an air-conditioned car encircling the wheel. The wheel is lit with colorful LEDs that reflect onto the river below in night either. Leaving the Tianjin Eye, drive about 30mins out the downtown area to visit the Shi Family Mansion, which is a large and well-kept civil residence made up of 12 ancient-style quadrangle courtyards on both sides of a 60-meter-long road and a few additional elegant pavilions, pools and gardens. The architectural style and all the decorations fully represent the folk culture and custom of the late Qing Dynasty (1840-1912) and show the rise and fall of the 200-year-long history of the Shi Family in Yangliuqing, one of the richest families in old Tianjin. Now it serves as the folk custom museum in Yangliuqing which has a large collection of folk arts like Yangliuqing New Year paintings, brick sculpture, etc. 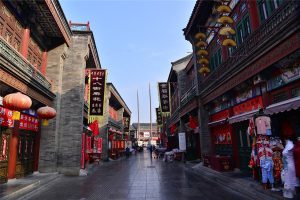 Taking a night cruise along the Haihe River to enjoy glamerous nightscape of Tianjin with all buildings on both banks of the river are colorfully lit (available during 19:30-20:30 of April-Nov); 2) enjoy a leisure night stroll around Tianjin Haihe Cultural Square.

Starts sightseeing from the Porcelain House (China House) which is the most eye-catching building in Tianjin. It is a private museum decorated with about 400 million pieces of ancient Chinese ceramic chips and over 13,000 ancient Chinese porcelain vases, plates and bowls. Inside the house, you can see many art works of paitings made by porcelain pieces and decorated on the walls and ceilings. Later, move on to the Five Great Avenues (Wudadao Area), including Chengdu Dao, Munan Dao, Machang Dao, Dali Dao and Chongqing Dao. Taking a carriage or walking along the streets, you can see over 2,000 beautiful examples of Italian, German, French, Spanish and British architecture with different style mixed in with old Chinese villas that showcase the modern history of China. The next place to go is St Joseph Catheral which was a very well preserved Catholic Church built by the French during colonial period.