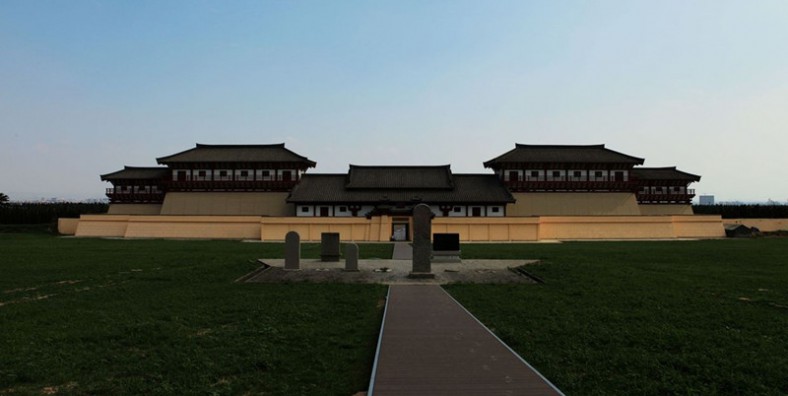 The Yangling Mausoleum of the Han Dynasty, in short Han Yang Ling, is located at Zhangjiawan Village, about 20 kilometers (12 miles) north of Xi'an City, Shaanxi Province. It is a joint tomb of Liu Qi, a notable emperor of the Western Han Dynasty (206 BC-24AD), and his empress Wang. It was built in the year 153 AD and covers an area of 20 square kilometers (4,942 acres).

Address: Weicheng district of the City of Xianyang, Shaanxi Province

Why is Yangling Mausoleum of Han Dynasty So Special?

The Yangling Mausoleum of the Han Dynasty, in short Han Yang Ling, is located at Zhangjiawan Village, about 20 kilometers (12 miles) north of Xi’an City, Shaanxi Province. It is a joint tomb of Liu Qi, a notable emperor of the Western Han Dynasty (206 BC-24AD), and his empress Wang. It was built in the year 153 AD and covers an area of 20 square kilometers (4,942 acres). It is a magnificent and abundant cultural relic, comprising the emperor’s tomb, empress’ tomb, the south and north burial pits, ceremonial site, human sacrifice graveyard and criminals’ cemetery. Neatly arranged and centered with the emperor’s tomb, Han Yang Ling Mausoleum reveals the strict hierarchical social structure. The Outside Pits Exhibition Hall was opened in 2006 and is the first underground museum in China.

Liu Qi, Emperor Jing of Han Dynasty, was the fourth emperor of the Western Han Dynasty. He and his father Liu Heng, Emperor Wen of Han, jointly created the first prosperous period in China’s monarchical society — Enlightened Administration of the Han Emperors Wen and Jing (文景之治). Houyuan 3 year after the yuan (141 years before the first) died in Weiyang Palace, Chang ‘an City, buried in Yangling. Built in the Qianyuan 4 year (153 BC), it took 28 years to build the mausoleum from the beginning of Emperor Jingdi of the Han Dynasty to the burial of Queen Wang.

The emperor’s tomb is at the center of Han Yang Ling Mausoleum. The subterranean chamber has passages on its four sides, thus the shape assembles the Chinese character ‘ya (亚)’. This type of tomb was considered the best in ancient times. Around the tomb is a tall wall on each side, with four big gates at the middle of each wall. The south gate has been unearthed and opened for tourists.

There are 86 outside pits laid with burial objects. These pits vary in size and the length of these ranges from four meter (13 feet) to over 100 meters (328 feet). In the 1990s, archaeologists excavated ten outside pits and found that they were made to be enclosed space, like wooden cases. From the vestiges, those pits are believed to have original column frames, separating boards, doors and brick floor. Unearthed burial objects include naked pottery figurines, chariots and horses, weapons, articles of everyday use and a large number of pottery animals.

The empress’ tomb is in the east of Han Yang Ling, 450 meters (1,476 feet) away from the emperor’s tomb and is much smaller in comparison. It is also square, and is 350 meters (1,148 feet) in length. A wall made of pounded earth encircles the tomb, with four gates on each side. The underground chamber is also laid out like the Chinese character ‘ya’. The earth on top of the tomb measures 24.49 meters (80 feet). Thirty-one outside pits have been found around it.

The south burial pits are located to the southeast of the emperor’s tomb while the north burial pits are to the northwest of the emperor’s tomb. Both of them have twenty-four small pits of varying sizes, and occupy an area of 96,000 square meters (24 acres) respectively. Fourteen pits in the south burial location were discovered in the 1990s. The excavated articles amount to over 3,000, the number of which surpasses the Museum of Qin Terra Cotta Warriors and Horses. Articles include the painted pottery figures, weapons and utensils, which fully represent the army life in the Han Dynasty.Compared with the Qin Terra Cotta Warriors and Horses, the pottery figures are one tenth of the actual objects and vary from the warrior to civilian, male to female. Some of them are sculptures of valiant female warriors, gentle and elegant servants, singers or dancers in traditional dress with their long sleeves waving.

This underground Han Yang Ling Museum covers an area of about 7,850 square meters (2 acres). It has been modernized to exhibit ten outside pits surrounding the emperor’s tomb but does not devalue the look of the mausoleum. To protect the culture relic, the pits are encased with toughened glass to create the similar environment as it was before. Suspended corridors made of glass make it more convenient for visitors to be able to take a closer look. Through the glass on the right, on the left or under foot, visitors can see pottery warriors, animals, chariots and horses, and the archaeologists excavating.

To the southeast of the emperor’s tomb is the Luojing Stone Site (Ancestral Temple Site). It is an important and the largest discovered ceremonial site of the royal cemetery. The site is surrounded by moats and is almost square, and is 260 meters (853 feet) in length. A platform made of pounded earth stands in the center. The Luojing Stone here is presumed to be used to demarcate and measure the height when the museum was built. It is the earliest markstone in the world, which is used in measuring. It has twelve doors evenly distributed on four sides.

Winter is not a good time to travel Xi’an, followed by summer: winter is cold and dry, the temperature is low, cold and biting when the wind blows.At this time to visit the indoor attractions more appropriate. Summer is very hot, especially in the middle of summer, the sun is strong, around noon is the sun exposure; There are occasional storms, but they come and go quickly. Please take precautions against sun protection when you go out.

How to get to Xian Museum

If you want to get out of the traffic and hassle of navigation, you can book a private tour package that includes visiting, dining and transfer from us. Our local guide and driver will escort you to the Yangling Mausoleum of Han Dynasty in the fastest and most convenient way and take care of all the details. You just have to focus on the visiting.


By Metro:
Take metro line 2 and get off at City Library Station, get out from Exit D and then you can find You 4 bus.