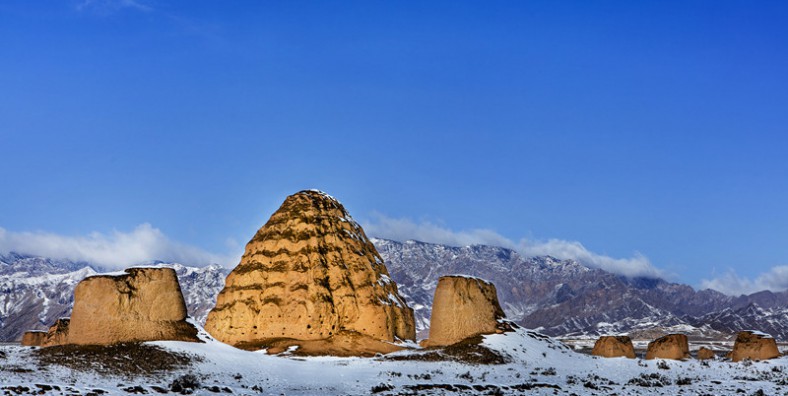 Admission Fee: RMB 75
Address: at the foot of the Helan Mountains in the Ningxia Hui Autonomous Region of northwestern China（中国西北宁夏回族自治区贺兰山脚下）

It is one of the largest and best preserved imperial graveyards in China. About 17,000 m² so far have been excavated, and efforts are continued to preserve the remains of this mysterious area.

Since June 1972, nine imperial tombs and 253 lesser tombs have been unearthed, which are as grand as Ming Tombs in Beijing. With a total area of more than 50 square kilometers (19.3 square miles), it is unique among royal burials. The layout is patterned after the celestial bodies.

so far, only the No.3 mausoleum has been completely excavated and researched. This mausoleum, owned to Western Xia’s first emperor Li Yuanhao, has been believed as a pavilion-tower structure both traditional mausoleum and temple styles with Buddhist characteristics.

The Western Xia dynasty were very first built by the founder of the Western Xia Kingdom (1038 to 1227), Li Yuanhao, exactly who built about 70 tombs; among which, one was for himself, and a few tombs for his relatives and much more to be kept empty in order to prevent theft. From 1220 to 1227, as Western Xia Kingdom failed in the war against the ancient Mongolian army, the imperial tombs were damaged. Nowadays, tourists here can only see piles of relics.

The emperors of the dynasties have hoped that the mausoleum will be magnificent, and they hope that they will not be robbed. The tall seals have become an important barrier to prevent the excavation. The tombs of the emperors of the Ming and Qing Dynasties have built the tombs of emperors and funerary objects under the cover. The tomb of the Western Xia Mausoleum is not located directly above the tomb, but is located 10 meters to the north of the tomb, and it does not function as a seal.

In addition, the entrance to the Tomb of the Western Xia Dynasty Mausoleum is set inside the temple, which is unique in the mausoleum of the emperor. Concealing the direction of the tomb is one of the most secretive work when the emperor’s tomb was built. The entrance of the Ming Dynasty emperor Wanli’s tomb was set on the side of the city, which is hard to detect. The archaeological staff used to ponder when they discovered it in the 1950s. The emperors of Western Xia do not seem to worry about this. In addition to the entrance to the tomb, they are placed directly outside the temple. There is a fish-ridge-covered stone on the ground between the temple and the mausoleum of the Xixia Emperor’s Mausoleum. The tomb is buried in the seal below.

Archaeological excavations show that compared with the luxurious Tang and Song Dynasties, the tombs of the Western Xia Mausoleum are much more “simple”. The three-chambered earth-hole structure consisting of the main room and the left and right ear chambers in the center has relatively few funerary objects.

There are 9 Mausoleums of the Western Xia Imperial Tombs. The No.1, No.2, No.3, No.5, No.7 and No.9 Mausoleums are located on the plains. The No.4, No.6 and No.8 Mausoleums are built on the hills. Each of the emperors is located in the north facing south and has a vertical rectangular shape, covering an area of over 100,000 square meters. Although the outer Mongolian shape of these emperors is open, closed and non-external, the internal structure is roughly the same, divided into four parts: Jiaocheng(角城), Quetai(阙台), Yuecheng(月城)and Lincheng(陵城).

The Lingyi Ruins is a rectangular building group with a rectangular layout. It faces south and faces 20 degrees east to the south. The remains of the walls, courtyards, and temples in the site are clearly arguable. The surface is covered with a large number of bricks, tiles, tiles, dripping water. Building materials such as swan beasts, as well as porcelain fragments such as bowls, plates, and bottles.

How to Get to Western Xia Mausoleums