Day 01 Arrive in Shanghai
Day 02 Shanghai
After breakfast, your guide and driver will pick you up from your hotel to start your Shanghai exploration. The first stop is to visit Shanghai Museum, one of the Best Four Museums in China. This modern museum, with a round top and a square base which symbolizing the ancient Chinese perception of the world as “round sky, square earth”, has collected many international-standard exhibits of bronzes, paintings, calligraphy, sculpture, ceramics, jade from more than 5,000 years ago to the Qing dynasty. It is an ideal place to learn about the profound Chinese history and culture.

Then, take an interesting walking through the charming Former French Concession which used t be designated for the French and residential and as the premier residential for expats and retail district of Shanghai during the settlement period(1849 until 1943) and the Republic of China era(1912~1949). Its juxtaposition between the ultra-modern and the colonial past,tree-lined streets, boutique shops, historic lane houses and villas make it a window into the city’s up-and-down history. 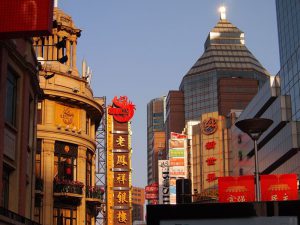 After lunch, drive a few kilometers to Lujiazui Area of Pudong New District to visit visit “the eye of Shanghai” – Shanghai World Financial Center (SWFC) where you can have a panoramic view of the whole Shanghai and Huangpu River area. Ascend yourselves to 474 meters on the 100th floor to experience sky walk on the transparent glass-walled walkway and feel Shanghai lying under your feet and blue sky hanging above your head.

Later, move to another popular landmark of Shanghai – Nanjing Road which is shopping paradise as well as a great place to take a wonderful walk to experience the local modern atmosphere. Lastly, you will stop at the Bund. Originally the towpath for transporting, the Bund transformed into a feverish trading district during European concession period. Stroll along the Bund, feel the perfect fusion of Chinese culture and Western culture, and seize the stunning Shanghai skyline with your own eyes.
Overnight in Shanghai. 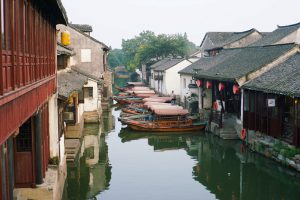 After breakfast, you will be escorted 90km(1.5hrs) from Shanghai downtown to Kunshan Sun Island Golf Club to play golf.
In the afternoon，you will visit famous Zhouzhuang water town(originally Yaocheng, Zhenfengli), was first built by the ruler of State Wu in the Spring and Autumn Period (770-476 BC). In Northern Song Dynasty, Zhou Digonglang settled down here, and he was a devout believer in Buddhism. Later he and his wife donated all their properties to Quanfu Temple. Then the local people renamed the town to Zhouzhuang (Zhou Village) to show the appreciation and respect to this generous contributor.
Almost every piece of the ancient town is an art work. According to the Suzhou Tourism Bureau, they have invited all the best archaeologists in China to manage a deteriorating carved brick gate in Zhouzhuang, but none of them could handle the job. No living archaeologist has mastered this ancient skill.
The town benefits from the beauty of rivers and lakes. The 14 ancient bridges on the river were built during the Yuan (1271 – 1368), Ming (1368-1644) and Qing (1644 -1911) dynasties. Double Bridge is one tourist clamor to visit, where two bridges positioned to form a right angle over the stream. Another noteworthy bridge is Fu’an Bridge, which is the oldest bridge in Zhouzhuang – built in 1355.
Residents of the ancient town built their houses and streets along the rivers. Over 60% of the town’s buildings date back to the early Ming Dynasty. Two buildings in particular attract lots of tourists: Shen Ting (Hall of Shen) built in 1742 and Zhang Ting (Hall of Zhang). Tourists can also take a gondola to experience the small water town(Optional).Drive to Suzhou and drop-off at your hotel. 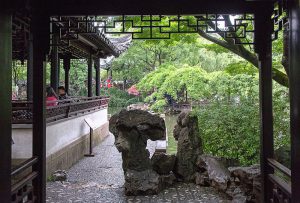 After breakfast, you’ll start today’s trip with an interesting visit to Lingering Garden, one of the Four Greatest Gardens in China as well as the perfect representative of traditional Suzhou Gardens. The Lingering Garden has synthesized almost all the classic features of Suzhou gardens. It is composed of residential areas, shrines, family temple and garden, making fully use of the changings between big and small, bend and straight, bright and dark, tall and low, tight and disperse, with the surrounding landscapes, such as trees, flowers, lake, sky, as backgrounds to create an ingenious system of space. After visiting Lingering Garden, move on to next site – Shantang Ancient Street, a wonderful place for a relaxing walking. It used to be an important trade and culture center during Ming and Qing Dynasties, and now is famous as “the miniature of old Suzhou and the window of Wu culture”. Enjoy the ornate water-town style architectures, marvel at the bustling streets and savor at local snacks. 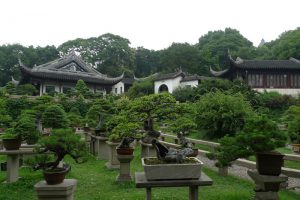 In the afternoon, you will go to explore the most historical site in Suzhou – Tiger Hill. The hill is only 36 meters in height, but covers about 3.5 acres areas with a number of historical sites some of which have history over 2,500 years. The most famous site is the Yunyan Pagoda which is an over-1000-year-old pagoda with seven stories in height and famously leans much the Leaning Tower of Pisa. Apart from the history, the Tiger Hill is also an amazing place to go for a walk, enjoy natural scenery and experience local custom. Next, transfer to Suzhou No.1 Silk Factory where you could not only see how the silk is processed from worm to the final product, but also learn some history and culture of silk in China.

After all sightseeing, drive back to Shanghai for accommodation.