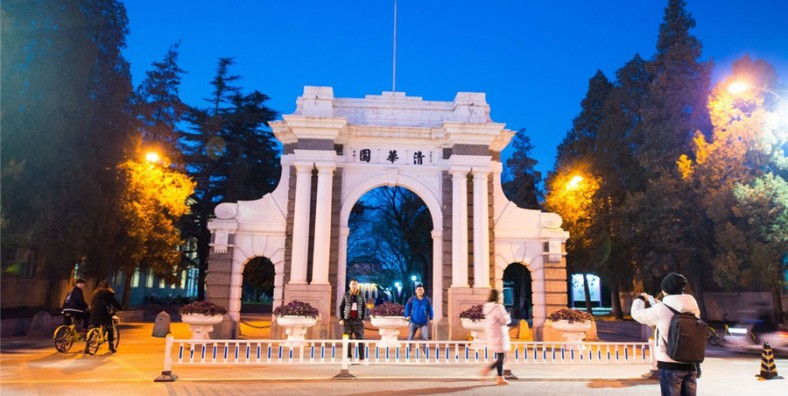 Tsinghua University, located in northwest Beijing, China, is a public institution that traces its roots back to 1911. The primary language of instruction is Chinese, though there are some graduate degree programs offered in English. For instance, the university has English-taught master's programs in Chinese politics, foreign policy and international relations; mechanical engineering; and global business journalism, among others. Tuition costs vary by degree program and language of instruction. The university's international students hail from more than 100 countries, with the bulk of them coming from Asia.
English Name: Beijing Tsinghua University
Chinese Name: 北京清华大学
Recommended Visiting Hours: 1 or 2 hours
Location:No.30 Shuangqing Road, Haidian District in northwest Beijing

Tsinghua University (abbreviated THU; Chinese: 清华大学; also romanized as Qinghua) is a major research university in Beijing, and a member of the elite C9 League of Chinese universities. Since its establishment in 1911, it has graduated numerous Chinese leaders in politics, business, academia, and culture.

The university comprises numerous schools and departments, which offer programs across a variety of disciplines: science, engineering, literature, arts, history, philosophy, economics, management, law, education and medicine. In all, there are more than 70 degree programs available to undergraduate students at Tsinghua University, as well as many more master’s and doctoral programs. The university has more than 300 research institutions. Among the university’s research labs are the Tsinghua National Laboratory for Information Science and Technology, the State Key Laboratory of Precision Measuring Technology and Instruments and the National Engineering Laboratory for Digital Television. Students at Tsinghua have around 200 student groups that they can get involved in, such as the Zijing Volunteer Service and the Students’ Performing Arts Club.

Tsinghua University engages in extensive research and offers 51 bachelor’s degree programs, 139 master’s degree programs, and 107 doctoral programs through 20 colleges and 57 departments covering a broad range of subjects, including science, engineering, arts and literature, social sciences, law, medicine.  Along with its membership in the C9 League, Tsinghua University affiliations include the Association of Pacific Rim Universities, a group of 50 leading Asian and American universities, Washington University in St. Louis’s McDonnell International Scholars Academy, a group of 35 premier global universities, and the Association of East Asian Research Universities, a 17-member research collaboration network of top regional institutions. Tsinghua is an associate member of the Consortium Linking Universities of Science and Technology for Education and Research (CLUSTER).

Tsinghua campus is large with many facilities including high quality sports facilities, swimming pool, library. It is also located close to Wudaokou which is the center of the student district in Beijing and has many international restaurants and bars.

Located in the north of Tsinghua University, Zijing Apartments (紫荆公寓) is the most modernised student dormitory in China and the largest, able to accommodate 22,400 students. Zijing comprises 26 blocks, with 23 buildings ranging from 7 to 15 stories. The total construction area amounts to 350,000 m2 (3,800,000 sq ft). The cost for the apartments are below.  New students should apply at the reception desk of Zijin Building 19.

Research at Tsinghua University is mainly supported by government funding from national programs and special projects. In the areas of science and technology, funding from these sources totals over 20 billion yuan, which subsidizes more than 1,400 projects every year conducted by the university. With the prospective increase of state investment in science and technology, research at Tsinghua is projected to receive more financial support from the state.

Internationally, Tsinghua was regarded as the most reputable Chinese university by the 2017 Times Higher Education World Reputation Rankings where it was ranked 14th globally. In 2019, it ranked 6th among the universities around the world by SCImago Institutions Rankings. In 2013, Tsinghua also topped the newly created regional QS BRICS University Rankings. In 2019, US News and World Report Best Global University Ranking ranked Tsinghua at 2nd in Asia and 36th globally.The Netbig Chinese university rankings gave Tsinghua 1st in 2008, 2009 and 2010, while it was awarded 2nd by the China Education Center for those years.

For sciences in general, the 2018 CWTS Leiden Ranking ranked Tsinghua University at 6th in the world for the time period 2013-2016. In 2014, it was ranked 23rd in the Times Higher Education Rankings by Subjects for Engineering and Technology, which are historical strengths for Tsinghua.

Since 2015, Tsinghua University has overtaken the Massachusetts Institute of Technology to top the list of Best Global Universities for Engineering published by the U.S. News & World Report.

Tsinghua was recognized as the 14th best university in the 2019 Times Higher Education World Reputation Rankings.

Reflecting its motto of Self-Discipline and Social Commitment, Tsinghua University is dedicated to academic excellence, advancing the well-being of Chinese society, and global development. Tsinghua is perennially ranked as one of the top academic institutions in China, Asia, and worldwide, and was recognized as the 14th best university in the 2017 Times Higher Education World Reputation Rankings. Since 2015, Tsinghua has been ranked as the best engineering and computer science school in the world based on factors including total research output and performance. Tsinghua is a Class A institution in the Double First Class University Plan.

What to See in Tsinghua University Campus

The unique design of Tsinghua University combines both traditional Chinese and western style. The campus itself also has many trees, water landscapes and garden which provide an excellent study environment for students. Two particularly notable landmark buildings are Shui Mu Tsing Hua Garden and the Second Gate.

Shui Mu Tsing Hua is the most famous scenic garden in Tsinghua University, composed of green hills, a small flowing river, two exquisite pavilions and many trees. Summertime is the best time to visit during which time visitors can appreciate the beauty of the flourishing lotus flowers and traditional hall beyond the lotus pond.

Built in 1909, the second gate lies in Tsinghua Road and was once used as the main entrance. The second gate is a classic and elegant three-arch architecture built from black bricks and white columns, while the gate frame wears three character inscriptions (qing hua yuan) inscribed by a      grand master in the Qing Dynasty (1636-1912).

Where is Tsinghua University

How to Get to Tsinghua University