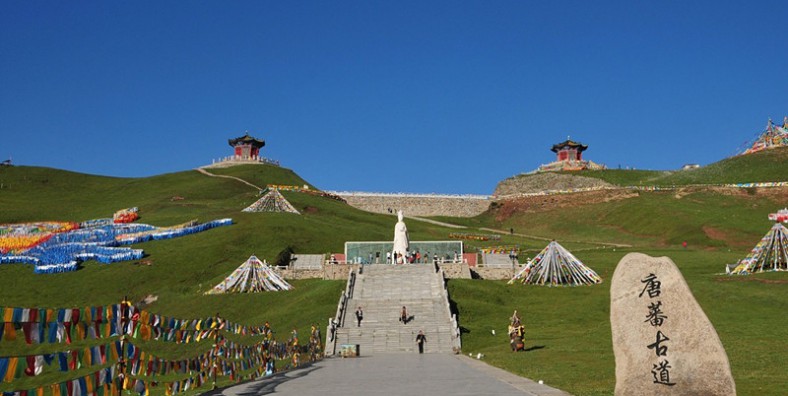 Why is Riyue Mountain So Special?

On the east side of Sun and Moon Mountain, farmlands form a poetic picture in frontier place. And on the west side, the vast grassland and groups of sheep and caw form a nomadic picture. It is rarely to see the great difference between the two sides of this mountain.

Situated 40 kilometers (25 miles) from southwest of Huangyuan County in Xining, Sun and Moon Mountain (Riyue Mountain) marks the boundary between the eastern agricultural area and the western pastoral area of Qinghai Province. From the top of the mountain there is a superb panorama of the beautiful landscape – both prairie and farmland. It is 3,520 meters (11,549 feet) above the sea level and is believed to be the only road to the Qinghai-Tibet Plateau.

The Legend of Riyue Mountain

Born in the name of Hongling, Riyueshan has been an important passage for many years in western China and an important link between the Han and Tibetans. There is a legend about it: during the Tang dynasty (618-907), the emperor married his daughter princess Wen cheng to Tibetan leader songzanganbu to improve the relationship between the two countries. When the princess arrived at the mountain to rest, she felt homesick. She took out the precious sun and moon mirror that her father had given her, because someone told her that it would show her hometown and also yearn for her home. But in order not to miss her country any more, she resolutely put down the mirror and continued her journey to the west. The mirror was broken into two pieces, shaped like the moon and the sun. From then on, this mountain has its name, sun and moon mountain.

Daotang River originates from the west of Riyue Mountain and flows west into Qinghai Lake (China’s largest inland salt lake). There is also a famous legend about Princess Wencheng. As she passed the mountain, her homesickness tears slipped down and turned into a river. Its westward flow symbolizes the princess’s determination never to turn back. In fact, it is the only river in China that flows from east to west.

Sun Pavilion and Moon Pavilion are built on both sides of the mountain pass to commemorate Princess Wencheng. The vivid murals are intended to reproduce the scene and life of the princess when she entered Tibet. In these two pavilions, Yueting specially depicts the grand occasion of cultural exchange brought to Tibet by Princess Wencheng, including crop seeds, technology, medicine and Buddhism. It was she who brought civilization to Tibet.

The period from June to September is the best time to travel. Green grass, wild flowers and tents can be seen on the slopes of the sun and moon mountain, providing the highest feeling for the plateau landscape.

Take bus from Xining Xinninglu Bus Station to Huangyuan, and then charter a car or taxi to visit the mountain.

One thought on “Riyue Mountain in Xining”