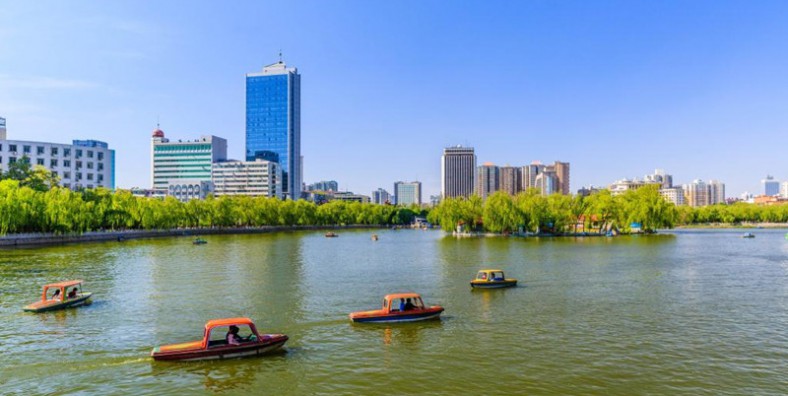 Why is Yingze Park So Special?

Yingze Park is located in downtown Taiyuan, Shanxi, China. It was opened to the public on June 1, 1957 and covers 63.28 hectares including its lake. It has over 390,000 ornamental plants in more than 10 gardens. Near the east gate is the Jin Merchant Museum, in the style of an ancient guild hall. In the park’s center is the Cangjing Building, an 800-year-old structure transported from the Dongda Temple in Taigu. The north gate of the park features an ornate archway called “Beauty of Taiyuan” based on the style of the Yonghe Lama Temple in Beijing. The park also has recreational boating, arcade games, and children’s playgrounds.

Taiyuan, the capital city of Shanxi Province, is an ancient city with a history of over 2,500 years, earning its fame for the long history and rich mineral resources. As one of the famous historical cities in China, Taiyuan is the known for many historical sites, such as the Chongshan Monastery which was built in the Tang Dynasty (618 – 917), Chunyang Palace, in which the layout of the buildings resembles the shape of the Eight Diagrams, and the Twin Pagoda Temple which is the symbol of Taiyuan. Taiyuan is also a city, rich of mineral resources such as coal, iron, copper and limestone, especially for coal mines, making the city known as ‘the sea of coal’.

In 1952, the Taiyuan Municipal Government decided to build a new park on the south side of Yingze Street.

In 1954, because it was located outside the Yingzemen Gate of Ancient Taiyuan, like the Yingze Street and Yingze Bridge, the new park was named Yingze Park. In the same year, the party and the government launched the city’s people’s voluntary labor to dig sewage and dig the lake , stacking walls, planting trees and planting flowers. The park is divided into the South and North Lakes by the seven-hole bridge. In 1954, the South Lake began to be dug, and in 1955, the North Lake began to be dug.

On June 1st, 1957, on the International Children’s Day, the official ticket sales of Yingze Park was opened to the public. It was a large urban park that was rare in the country at that time.

Yingze Square is located in the northern part of Yingze Park and covers an area of ​​5,1900 square meters. It is a bright spot in the overall landscape of Yingze Park. The eastern part of Yingze Square is dominated by plant landscaping. Yingze Square Central District includes chrysanthemum sculptures, springs, water corridors, lakes and rockeries, viewing platforms and lake music fountains, among which the music fountains are splendid and can be called the “First Spring of the Three Jin Dynasty” (三晋第一泉).

Yuexin Yuan is a combination of classical buildings and modern building materials, it is the main venue for all kinds of flower exhibitions in Yingze Park. Thousands of peony are open to the public in the Peony Garden before and after the summer, and the annual Peony Festival has become a traditional flower event in Yingze Park.

In spring, summer, autumn three seasons, Yingze Park is a good weekend leisure place. Especially in the evening there will be a large music fountain, worth a look. Winter is relatively depressed. Yingze Park holds exhibitions of tulips and peonies during May Day and show of chrysanthemums during October day.

How to get to Tianlongshan Grottoes

If you want to get out of the traffic and hassle of navigation, you can book a private tour package that includes visiting, dining and transfer from us. Our local guide and driver will escort you to the Tianlongshan Grottoes in Taiyuan in the fastest and most convenient way and take care of all the details. You just have to focus on the visiting.