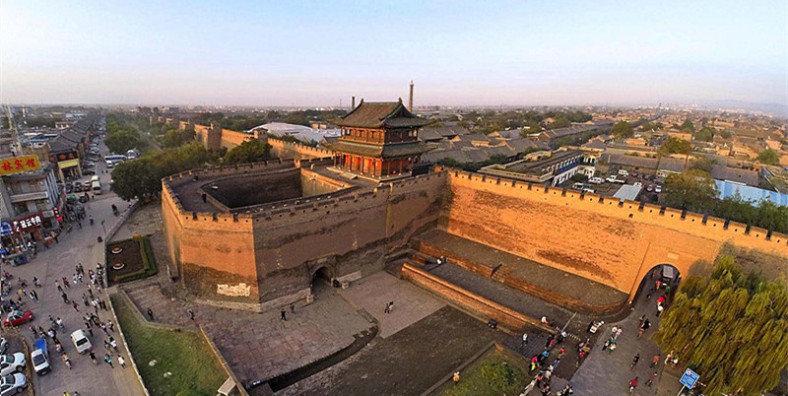 The walls surrounding Pingyao Ancient City were first built in the Xizhou(西周), and have a history of about 2,700 years. The ancient city wall is 10 meters high and 6,162 meters long, 3.5 meters wide. The walls are one of the four best preserved ancient city walls in China.

We see on both sides of the wall there is a short wall, called girl wall. They are for protaction, incase of any accidently falling.Why is it called girl wall? There iss a story passed down among the people.

There had been no girl wall in the old days. Once an old man was brought to build the city wall, and his little granddaughter, who was dependent on him, followed him every day. The little girl sit around and watch. One day, a very tired workers in a daze came to the edge of the city wall. Fearing that he would fall down, the little girl pushed him inward with great force. Unexpectedly, though the workers were saved, the little girl fell dead. In memory of her, the craftsmen built a low wall over the city and called it girl wall. It’s a touching story, but it does illustrate the protective function of the girl wall. Therefore, we call this kind of protective wall girl wall in the construction industry. That’s why people call it girl wall.

There are four turret on the Pingyao ancient city walls, they are on the four cornervof the city walls, that why we all call them corner tower(角楼) in Chinese.

The corner of each city is the weak point in the defens. Because most of the joints of the walls are at right angles, the sight is often limited. In Pingyao, people built turrets on the platform of the four corners of the city wall, which expanded the vision and strengthened the defense, and suddenly a blind corner became full of vitality.

The crenel, in Chinese we call it Duokou(垛口). They are short concave-convex walls on city walls.

When the level of the city wall get to the height of the man’s chest, the crenel is constructed. There is a small square hole in the upper part of the crenel. The bricks on the left and right sides of the lookout hole, which is to facilitate the observation of the enemy and avoid to be hit by the enemy’s arrows. The lower part of the crenel has a small square hole, is an arrow shotting  perforation. The bottom side of the shotting hole is inclined downward to facilitate shooting the enemy under the city wall.

Pingyao ancient city is also called turtle city. Because it has six gates. The square-shaped city walls, like a turtle, has six gates, one north and one south, two East and two west. They just like the head, feet and tail of a turtle. What’s more, the streets inside the city looks like the lines on the turtle’s back. That’s why we call it turtle city.

For the city walls out side the gate, we call they Wengcheng(瓮城). Wengcheng is one of the main defensive facilities in ancient cities. Build a small town outside the gate. The city walls there are the same height as the main city. They are round or square in shape. The round one looks like a jar, in Chinese we call it Weng(翁), so it is called Wengcheng(瓮城).

How to Get to Pingyao Ancient Wall

If you want to get rid of hustle of transportation and troublesome navigation, you can book a private tour package which covers visiting, dining and transfer from us. Our local tour guide and driver will escort you to Pingyao Ancient Wall with speed and convenience, and take care of all the details. You just need to focus on travel.

For Independent travelers you can arrive at Pingyao ancient wall

Take a tourist bus to Pingyao Ancient City from Taiyuan Railway Station at 6:30am, the journey will take about 1 hour.
Take a bus from Taiyuan Jiannan Bus Station(太原建南客运站) to Pingyao at 8:00, 8:10, 9:00 or 10:00 in the morning.

Take a taxi from Taiyuan to Pingyao Ancient City directly, it costs about 350 CN￥.

Pingyao ancient city famed for its importance in Chinese economic history and for its well-preserved Ming and Qing urban planning and architecture. By the 16th century, it was a regional financial hub; some consider it to have been the financial centre of the Qing Dynasty in the late 19th century. It is a UNESCO World Heritage Site and a AAAAA-rated tourist attraction.

Pingyao Ming and Qing Street has been a commercial center of Shanxi Province since the Ming Dynasty. It is also an essential cultural relic of Pingyao County as it has retained the traditional buildings of the Ming and Qing dynasties along the street. Tourists can find a lot of ancient shops and banks on the street.

Rishengchang Former Bank is the earliest exchange shops in China. It is the first private financial institution in China that specializes in deposit, loan and exchange business.Today, the old site of Rishengchang has been opened as the Museum of Piaohao in China(中国票号博物馆). What people see and hear here is the same scenery of the past.

Autumn and Winter are the best time to visit Pingyao. For Autumn, there is Pingyao International Photography Festival waitting for you. For winter, you can enjoy the beautiful snow scenry at Pingyao Ancient City.

One thought on “Ancient City Wall of Pingyao”