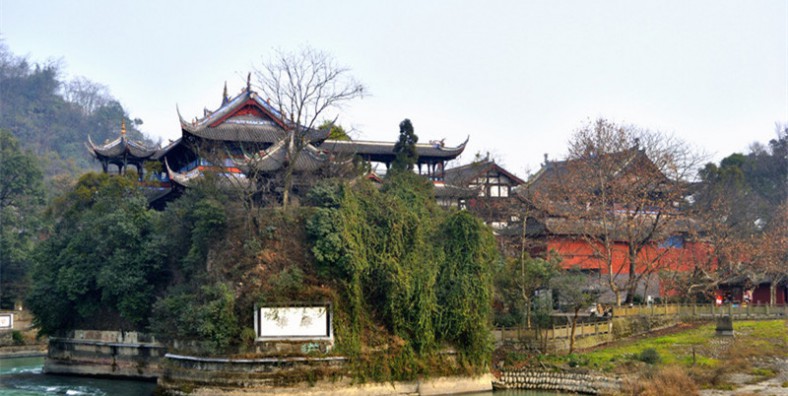 Qingcheng Mountain is divided into the front mountain and the back  mountain, and it's surrounded by ups and downs of peaks, verdant trees. It enjoys a high reputation "the most tranquil place under heaven" Moreover, Qingcheng Mountain is one of the birthplaces of Taoism (Daoism)-- China's only indigenous religion. For ordinary tourists, mount Qingcheng is an ideal summer resort.

Back mountain:20 RMB per person

Chinese Name:成都都江堰青城山
Qingcheng Mountain is located in Chengdu,covering Scenic area of 200 square kilometers, and the highest peak of Laojuns is 1260 meters above sea level.Qingcheng Mountain is divided into the front mountain and the back  mountain, and it’s surrounded by ups and downs of peaks, verdant trees. It enjoys a high reputation “the most tranquil place under heaven”. Moreover, Qingcheng Mountain is one of the birthplaces of Taoism (Daoism)– China’s only indigenous religion. For ordinary tourists, Mount Qingcheng is an ideal summer resort.

From Chengdu downtown, travelers can transfer to Qingcheng mountain with flexible of choices of transportation.

If you want to get rid of hustle of transportation and troublesome navigation, you can book a private tour package which covers visiting, dining and transfer from us. Our local tour guide and driver will escort you to Sichuan Museum with speed and convenience, and take care of all the details. You just need to focus on visiting.

For Independent travelers ,you can take cars or trains.

The person who laid the ground for Qingcheng Mountain’s position  in famous Taoist mountains is Zhang Ling.

In AD 143 the Eastern Han Dynasty), two years after the completion of the Twenty-Four Essays, Zhang Ling reached Mount Qingcheng  where he established China’s indigenous religion– Taoism, made Qingcheng Mounta the  head of the four famous Taoist mountains in China.

During the Tang and Song dynasties, while recruiting foreign martial arts, Qingcheng Wushu became one of the four martial arts schools in China, forming a unique and complete system with Dan Dao,Refraining from eating grain, Yi Learning and Medicine.

The Sui and Tang dynasties’ support of Taoism made the Qingchengshan Mountain during this period really be “the house of immortals”. Taoism prosperous in the Sui and Tang Dynasties, Qingcheng Shan Gongguan everywhere, high road come forth.

After the Tianbao Rebellion, the Central Plains in security disturbance, Emperor Xuanzong, Suizong went into Shu for refuge.

Jian Fu Palace is located in the Zhangren peak. Built in the Tang Dynasty Kaiyuan eighteen years (AD 730), after several generations of repairing, now only has two halls; kand three courts. The existing buildings were reconstructed in the Qing Dynasty Guangxu years (AD 1888). Currently there is triple of the hall for enshrining celebrity of Taoism and the gods, and there is a couplet of are 394 word on the column, praised as “a specialty of Qingcheng Mountain”.

Laojun Pavilion is located in the highest peak (Pengzu peak, 1260 meters above sea level, 33 meters in Height. It has nine layers, the bottom in square shape, the upper layers in circle shape, and stands for the theory of “round sky and square land” as well as eight-diagram-shaped appetizer.

There are “Heavenly Master” Zhang Daoling and his thirtieth generation Sun Yat-sen Heavenly Master’s statues,and it was built in the Sui Dynasty. Tianshi Cave was surrounded by mountains on three sides, one side facing streams with towering old trees

There are mysterious water-eroded cave, beautiful river, rare tomb complex and large sites of Shu King, famous ancient temples. Here mountains, water, cave, corridor, and forest are an organic whole, can be comparable to Qingcheng Mountain front mountain. Scenic area more than 20 in all the way, there are ski lifts can make tourists save half way, they can appreciate the Qingcheng Mountain most of the sceneries in the back mountain.

You can choose to accommodate at hotel at Dujiangyan downtown, where has different levels of hotel.

Please check out at our (Dujiangyan Accounmondation.)

Dujiangyan Irrigation System:  Dujiangyan Irrigation System was built by Li Bing over 2,000 years ago, and it’s the longest and the only surviving water conservancy project in the world, characterized by no-dam diversion and the most complete concerved water conservancy project in China
Dujiangyan Panda Base: China Conservation and Research Centre for the Giant Panda (CCRCGP), Dujiangyan Base (中国大熊猫保护研究中心都江堰基地) is a brand new giant panda breeding base in Chengdu.
Dujiangyan Panda Valley: Located 60 kilometers (37 miles) from Chengdu, Panda Valley is in the Baima Village, Yutang Town, Dujiangyan City. The whole valley covers an area of 1.34 square kilometers (331 acres).
Dujiangyan Confucius Temple is the largest county-level Confucius Temple in Sichuan Province. In ancient times, it was used for commemorating and worshipping Confucius and his disciples and it was the place to study Confucianism.