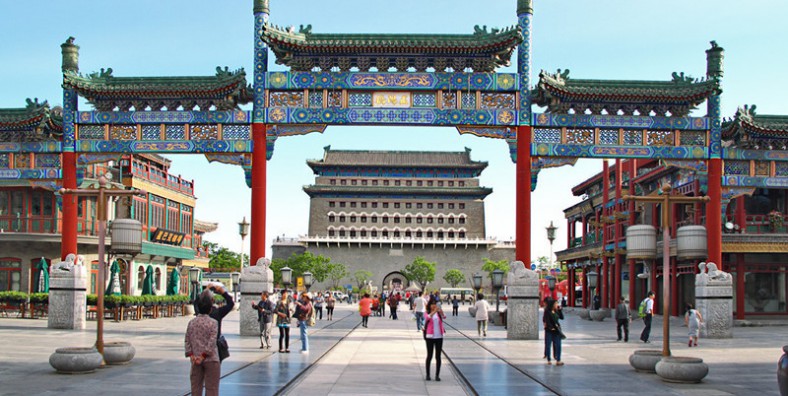 Qianmen Street has history of more than 570 years. It was called Zhengyangmen Street during the Ming and Qing Dynasties, and finally got the present name in 1965.

Why is Qianmen Street so Special?

Qianmen street starts from Zhengyangmen Jianlou in the north to Tiantan Road in the south, many time-honored brands are gathered here, such as Bianyifang roast duck, Liubiju pickled vegetable, Yueshengzhai cooked food, Ruifuxiang silk, Neiliansheng cloth shoes, etc. The Dashilan on the west side of Qianmen street is one of the most famous ancient street markets in Beijing. Here you can buy traditional handicrafts and feel the market features of old Beijing.

Where is Qianmen Street?

Qianmen Street is located on the central axis of Beijing. It is a famous shopping and sightseeing pedestrian street, stretching from Qianmen Arched Building in the north to the corner of Tiantan Park in the south. It is 840 meters long (919 yards) and 21 meters wide (23 yards). It consists of buildings with a style similar to that of the late Qing Dynasty (1644-1911).

After more than a year of renovation, it reopened on August 7 before the 2008 Beijing Olympics. Qianmen street is a symbol of real local culture. It has many long-standing Chinese names. Tourists can enjoy the traditional Chinese way of life. In addition, it has many international brands, such as H&amp;M, haagen Dazs, sephora, ZARA, Qggle, costcaf and SK jewelry. China’s most famous names are as follows: Quanjude, a dragon, Duyichu and Changchun Hall.

All kinds of food on Qianmen Street in Beijing attracted many tourists. Quanjude is dominated by roast duck, and has formed its own local delicacies with Quanyayan and over 400 special dishes. People all over the world like it. The dragon restaurant (formerly known as dragon mutton restaurant) is an authentic Muslim restaurant. It was first opened to the public in 1785. Representative dishes include golden fried prawns, braised oxtail, fried crisp chicken, etc.

At the beginning of Duyi, it has a history of 250 years and evolved from a pub. It is said that the name was given by Emperor Ganlong of Qing Dynasty (1711-1799). At present, the restaurant mainly provides baked wheat cake, stir-fry and roast black. Changchun Hall is a pharmacy with a history of more than 200 years. It manages Chinese and western medicines and provides medicines to customers through postal delivery service.

In addition, Dangdang car is also worth mentioning. They were first introduced to Beijing in 1924 and extended from Qianmen to Xizhimen. In 1966, they were abandoned. Due to advanced technology, two of them have returned to this street as sightseeing bus. Like the old ones, they start at opposite ends. Each room can accommodate up to 84 tourists at a time.

Qianmen street has become an important scenic spot for our “one-day tour of Beijing”.
The nearby scenic spots, Tian ‘anmen Square, Heweien Temple, Forbidden City and Dashila are worth visiting while coming to Qianmen area.

September and October are the best travel times.

Autumn is the most beautiful season in Beijing. As autumn grows stronger, the leaves of various trees are still fresh green, some are beginning to yellow, and some are brilliant red and flowery. Around October, the red leaves of Xiangshan Mountain became more and more red and more colorful. People who climbed the mountain to admire the red leaves came in an endless stream. In the morning after the autumn rain, the air was clear and clear.

Qianmen street has become an important scenic spot for our “one-day tour of Beijing”.
The nearby scenic spots, Tian ‘anmen Square, Heweien Temple, Forbidden City and Dashila are worth visiting while coming to Qianmen area.