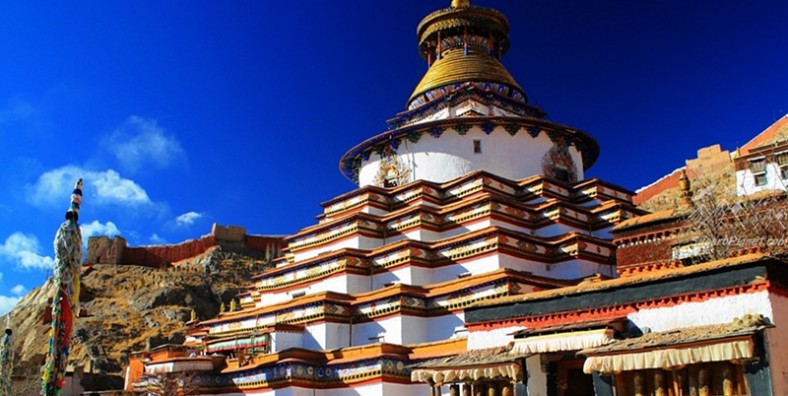 Palcho Monastery enjoys a high status in Tibet Buddhism history because it houses three sects - Sakyapa, Kadampa and Gelugpa together. Those three sects get along well with each other though they once quarreled and fought. The Bodhi Dagoba, the Main Assembly Hall, murals and Zhacang (hall for the monks) in the monastery are the most renowned.

Why is Palcho Monastery So Special?

Palcho Monastery is located 100 kilometers east of Shigatse. It is a monastery with architectural features of Han, Tibetan and Nepalese. It enjoys a high position in the history of Tibetan Buddhism because it accommodates three sects at the same time-Sakya, Kadan and Gelug. According to the Tibetan calendar, the Saka Dawa Festival will be held on April 15 to commemorate Sakyamuni, the founder of Buddhism. During the festival, about 500 lamas chanted Buddhist scriptures and loyal pilgrims gathered in the temple to commemorate Sakyamuni.

History and Development of Palcho Monastery

Palcho Monastery consists of four building units, damming, Qom, Dojo and city wall. It is a Ming dynasty building. Palcho Monastery was built by Prince Rabotein Konzan Parker and the first Panchen Lama Kedella Bouyeh in the first half of the 15th century (1418-1436). Kordrubuye (1386-1438) studied Buddhism together with Sakyamuni monks in his early years and soon became a Buddhist master who was proficient in Pancavia. In 1413, in order to promote Buddhism in Gyanz, Rabotein Konzan Faq (1389-1442) invited Kedrub Je to preside over Buddhist affairs, and developed the land and upper part of the castle of Gyanz Manor into a monastery. Construction began in 1418 and was completed in 1425. The temple is a three-story flat-topped Tibetan building with a mandala model on the plane.

In 1904, Britain made its second expedition to Tibet. The British occupied Gyantse Dzong and then attacked and occupied the Palkol monastery. The British who occupied Palcho Monastery looted a large number of cultural relics, scriptures, etc. in the monastery. They turned the Buddhist temple into a restaurant, knocked the prayer wheel with nails, and turned it into a food conveyor belt. After the battle, the British killed many Tibetans and occupied the whole Gyanz.

The main auditorium of Palcho Monastery has a history of about 500 years. In Tibetan, it is called “Chong Chen”. This is a three-story building. On the first floor are the main church, the east-west church and the cloister. The main church is a bronze statue of Sakyamuni, nearly eight meters (26 feet) high. It is said that about 14,000 kilograms (30,865 pounds) of copper were used to build the statue. The church has 48 pillars decorated with many silk “thangkas”.

Bodhi Dagoba  is about 32 meters (105 feet) high and is a nine-story building with 108 doors, 76 churches and shrines. It is a symbol of Paljor monastery. In Tibetan, Bodhi Dagoba is called’ Qom’. It also has another name, “Wanfo Pagoda”.

Murals in the monastery of Paljor are also very famous. These murals are mainly related to profound and open Buddhism and stories about Buddha. Tourists can find them almost anywhere in the monastery. Zhacang refers to the monk’s room. Every sect in the temple has its own bin.

According to Tibetan calendar, April 15th is the most important day of the year. Saka Dawa Festival will be held on that day to commemorate Sakyamuni, the founder of Buddhism. It is said that Sakyamuni was born and passed away on April 15th. During the festival, about five hundred Lamas chant sutras and the loyal pilgrims gather in Palcho Monastery to commemorate Sakyamuni together.

Temperatures in Shigatse range is from a high of 23℃ to a low of -25℃, with an annual average temperature of 6.3℃. From November to April in the next year, it is unsuitable for travelling to Shigatse because of the low temperature. July and August are considered as the rainy season. During this time, it often rains in the evening. The best time to visit Palcho Monastery is April to October.