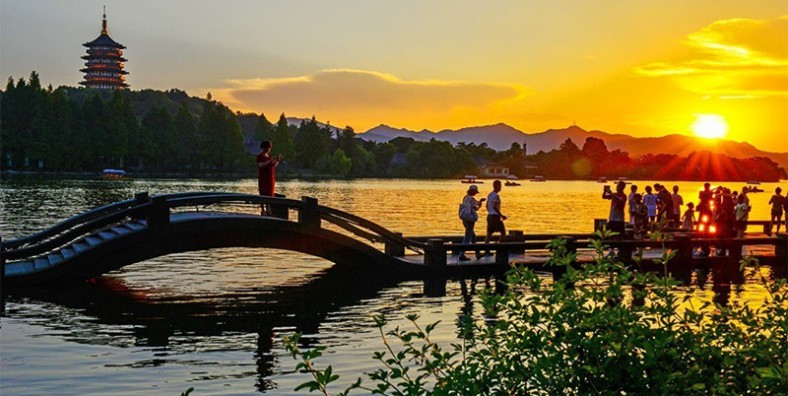 Leifeng pagoda (雷峰塔) is a five storey tall pagoda with eight sides, which was built in 975 and situated on Sunset Hill south of West Lake in Hangzhou. Dating back to North Song Dynasty, the King of Wuyue Kingdom ordered to build the pagoda in order to celebrate the birth of a son by his favorite concubines.

Best Seasons: All year round; spring and autumn best

Why is Leifeng Pagoda in Hangzhou So Special?

Where is The Leifeng Pagoda?

Leifeng Pagoda (雷峰塔) is a five story tall tower with eight sides, located on Sunset Hill south of the West Lake in Hangzhou, China. Originally constructed in the year AD 975, it collapsed in 1924 but was rebuilt in 2002. Since then, it has become a popular tourist attraction.

Leifeng Pagoda was constructed in the second year (977) during the Taiping Xingguo Period in the Northern Song Dynasty (960-1127) by the king of Wuyue Kingdom to celebrate the pregnancy of his favorite concubine, Huangfei. Thus, it was originally named Huangfei Pagoda. However, in the second year (1120) during the Xuanhe Period of the Northern Song Dynasty, the pagoda was severely damaged by war. Later, it was renovated during the Qingyuan Period (1195-1200) of the Southern Song Dynasty (1127-1279). Since then, ‘Leifeng Pagoda in Evening Glow’ has been famed as one of the top ten scenes in the West Lake.

A moving love story is contained in the Leifeng Pagoda history. The story tells of a young scholar who falls in love with a beautiful woman, unaware that she is a white snake who has taken on human form. A monk intervenes in order to save the scholar’s soul and casts the white snake into a deep well at the Leifeng Pagoda. Over centuries the story has evolved from horror story to romance with the scholar and the white snake-woman genuinely in love with one another, but such a relationship is forbidden by the laws of Heaven. The legend was existed as oral traditions long before any written compilation. It has since become a major subject of several Chinese opera, films and TV series.

The relics of the ancient tower are preserved on two basement storeys. Tourists can see the ancient bricks of the original tower through glass. The Legend of the White Snake Spirit is presented on the first storey above ground, in six parts. The mural on the second storey above ground shows how the tower was constructed in the Wuyue Kingdom. Poems and essays composed by writers of the past about the Leifeng Pagoda are exhibited on the third storey. The colorful murals on the fourth storey focus on the ‘Top Ten Scenes of the West Lake’. In the dome, there are 2002 shrines, each containing a small gilded stupa. There is also a Heavenly Palace in the dome. Records of the renovation of the tower and models of the new tower are put in the palace.

The roof is covered with bronze tiles which resemble terracotta tiles. Under the roof hang bronze chimes which make melodious sounds when blown by the wind.

How to get to Leifeng Pagoda in Hangzhou

If you want to get out of the traffic and hassle of navigation, you can book a private tour package that includes visiting, dining and transfer from us. Our local guide and driver will escort you to Leifeng Pagoda in Hangzhou in the fastest and most convenient way and take care of all the details. You just have to focus on the visiting.

One thought on “Leifeng Tower in Hangzhou”