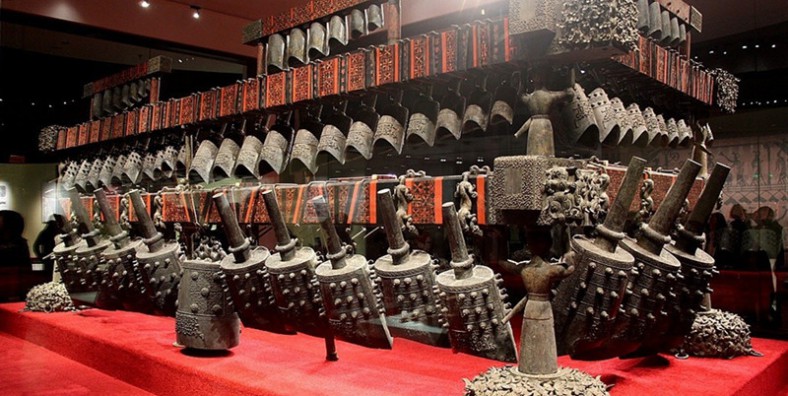 Hubei Provincial Museum is a national first-class museum and a national AAAAA tourist attraction. It is also a national comprehensive museum with the largest scale, richest collection and strongest scientific research strength in Hubei Province.

Why is Hubei Provincial Museum So Special?

It collects, protects and displays cultural relics found in the province. Since 1953, it has collected more than 200,000 cultural relics, including pottery, porcelain, jade, bronze, ancient weapons and ancient musical instruments. Of these, 812 are listed as China’s first-class cultural relics and 16 are regarded as national treasures.

Where is Hubei Provincial Museum

The museum moved to its present location in 1960 and acquired its present name in 1963. Since 1999, some new buildings have been added.

In January 1999, the chime hall with a construction area of 5717 square meters was completed and opened.

In December 2005, Chu Culture Center was completed and opened.

In 2009, it was appraised as a national museum jointly built by China and the mainland by the State Administration of Cultural Heritage.

In the exhibition hall, you can see many cultural relics unearthed from the tombs of the warring States period Zeng Guo (476-221 BC), such as exquisite bronze vessels “stand out antlers”, ancient halberds, triangular swords “Shu”, and ancient bamboo slips used for writing. The most famous treasure is the chime, which is the largest bronze musical instrument ever discovered. With a set of bells of different sizes, it can play the tones of different scales with quite beautiful timbre. There are about 3000 ancient Chinese characters on the clock, describing the music and the owner of this musical instrument.

In the Music hall, musicians dressed in ancient costumes play copies of bells every day. You will definitely be fascinated by ancient and beautiful music, which has been played many times overseas.

The Chu Culture Exhibition Hall of Hubei Provincial Museum shows Chu’s regional culture. Most of the cultural relics displayed here are bronze ware, lacquer ware, bamboo and wood products and silk knitwear. You can also see various ancient weapons of Chu, such as the swords of Gou Jian (King of Yue in the Spring and Autumn Period) and Fu Cha (King of Wu in the Spring and Autumn Period). In 2002, archaeologists discovered Chu’s chariots and horses. After careful repair, some chariots and horses are now displayed in this hall. In addition to the unearthed cultural relics, they also showed tourists some restoration models of houses inhabited by the Chu people, giving them a more direct impression of the life of the ancient Chu people.

Hubei Provincial Museum also has antique shops. After visiting the two exhibition halls, you can buy some souvenirs if you like.

The best time to pay a visit is in all year around.