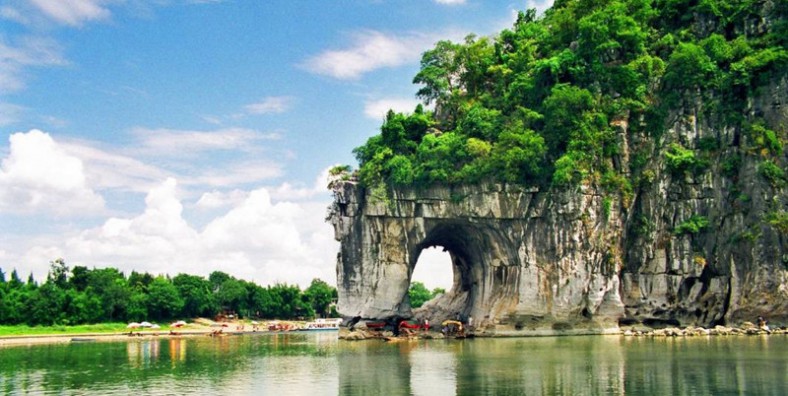 Elephant nose mountain is famous for its magic. Its magic, first of all, is the shape and spirit of bi-like, followed by the nose and legs between creating a round of water moon, forming a "Xiangshan Shuiyue" wonders. Therefore, elephant trunk mountain is the city emblem mountain of Guilin and is the symbol mountain of Guilin tourism.

Why is Elephant Trunk Hill So Special?

Elephant Trunk Hill (Xiangbishan) is the landmark of Guilin. Located in Elephant Hill Scenic Area (Xiangshan Park) at the confluence of Taohua River and Li River, it has been a famous tourism destination since the Tang Dynasty (618 – 907). The hill looks like a giant elephant drinking water from the river. There are not only many spectacular natural scenes around the hill, but also some ancient constructions, such as Puxian Pagoda, Yunfeng Temple, and Sarira Dagoba.

Where is Elephant Trunk Hill

Elephant Trunk Mountain, formerly known as Li Mountain, is located at the confluence of taohuajiang and Lijiang River in Guilin City, Guangxi. It is named after a giant elephant standing at the edge of the river, stretching its nose and drinking the sweet spring of Lijiang River. It is known as the symbol of Guilin’s landscape.

Legends of the God Elephant

There is an old story circulating among Guilin people. It is said that Elephant Trunk Mountain is the incarnation of the divine elephant, which was once the mount of the heavenly emperor. It was separated from the emperor in a war and was seriously injured and trapped in Guilin. A local couple saved his life and took good care of him. The animal fell in love with life there and decided not to return to heaven. The emperor presented a pagoda to help it suppress evil and protect the people. Since then, it has never left this place and eventually became elephant trunk mountain. The Puxian Pagoda at the top is said to be a godsend.

This brick tower was built in the Ming Dynasty (1368-1644) to worship Pu Xian, one of the four most famous Bodhisattvas. To the north of the pagoda is a figure engraved with his lines. This tower is located at the top of Elephant Trunk Mountain, which not only conforms to this story, but also to the fact that Pu Xian always appears on elephants.

Located on the southwest slope of Xiangbi Mountain, Yunfeng Temple is one of the famous ancient temples in Guilin. This was once the residence of Tang Dynasty monk Jian Zhen, who traveled through Japan six times to spread Buddhist teachings and help regulate the behavior of monks.

This scenic spot was the front line of the Taiping Heavenly Kingdom Uprising (1851-1864) in China’s massive civil war. On the second floor of the temple is an exhibition hall, which reviews this period of history with historical relics such as war flags, weapons and shells.

This magnificent island is located to the north of the mountain in the middle of Lijiang River and is the best place to enjoy the scenery and take photos. From there, you can not only enjoy the scenery nearby, but also enjoy the tunnel mountain and Baota shan in the distance. A cave named Moon Cave on the mountain of the tunnel is like the moon hanging in the sky. Together with the Shuiyue Cave in Xiangbi Mountain, they form a unique landscape of “double moons of Lijiang River”, one on the water and the other in the sky.

This night is another remarkable feature of this scenic spot. Using elephant trunk mountain as a projection screen and using hypermedia, laser, lighting and other high-tech means, Guilin’s beautiful scenery and culture are displayed. The play is divided into four parts: primitive Guilin, mysterious village, phantom theater and legend of the divine image. It depicts the natural landscape, such as the dense banyan forest, the beauty of rivers and mountains, and the living conditions of local ancestors. The last amazing laser show created a completely different mountain view.