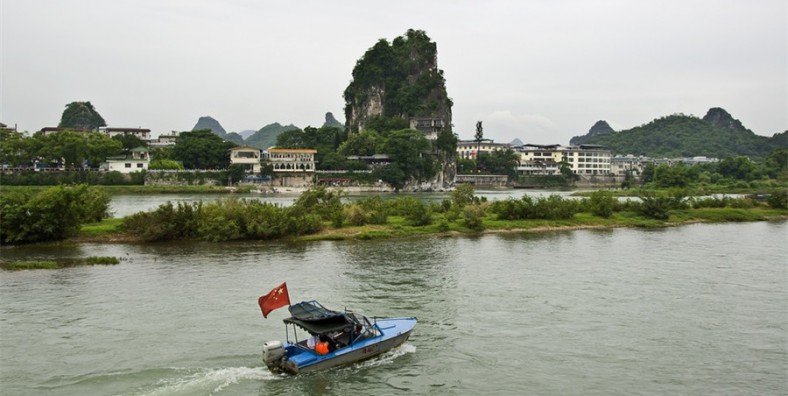 It was on this hill that a temple in commemoration of General Fubo was built in the Tang Dynasty (618-907), which gave rise to the name Wave-Subduing Hill.

Why is Fubo Hill So Special?

It reaches the height of 213 meters (698.8 feet) and emerges 62 meters (203.4 feet) above the water. Half of it stands in the river and the other half of it on land. Since the galloping water is always blocked here and eddied, the hill is considered to have the power of subduing waves.

Where is Fubo Hill

About 2 kilometers (1.24 miles) from Elephant Trunk Hill and above the western bank of Li River Scenery , there towers Wave-Subduing Hill, aka Fubo Hill, another of Guilin’s wonderfully scenic spots.

The cloister is located on the second stage of Xiaolangshan, combining the first stage and the second stage in a clever way. Trees and flowers thrive in the garden carefully cared for by the monastery. There is a pavilion in front of the garden, inside which is an iron boiler with a history of more than 300 years, weighing 1,000 kilograms (2,204.6 pounds). It is said that it can cook enough food for a thousand people. As a result, it was named “boiler for thousands of people”. When walking along the cloister to the third terrace, you can rest in the teahouse with a courtyard.

Tourists take a boat to enter the caves on the Green Fu Bo River and have the opportunity to enjoy the charming rocks, stalactites and internal statues. Most of the statues were carved in late Tang Dynasty with the completed techniques and later became precious Buddhist works of art.

There are many different and interesting legends about the Pearl Return Cave. One of them told me that after the victory of the war, General Fu Bo withdrew to the court by boat with herbs. However, on the way, he was designed to put the dried pearls on the boat. In order to clarify the matter, he poured all the herbs into the Fu Bo River and returned the so-called “pearls”. Therefore, this cave was named “Pearl Return Cave”. Another legend is that a farmer picked a glittering pearl from a cave, infuriating the dragon king. The farmer’s neighbor suggested that he return the pearl immediately, and he did so. Therefore, the dragon king stopped lifting the devil’s wave and human life became calm again. In order to commemorate this event, people named the cave “returning pearls.”

Legend has it that the General Fubo tested his sword on the rock, which gave it its present shape. When the general negotiated with the offenders in the Pearl-Returning Cave and reached a deadlock, he drew the sword and cut rocks off the huge pillar. The opponents were startled and immediately retreated.
‘How far do you want us to turn back?’ they asked.
‘Back to where my arrow falls.’ the general replied steadily.
‘Ok, we agree. Let us then see how far it will fly.’
General Fubo climbed up to the Fubo Hill and shot his arrow, which flew a distance of three hills till it landed on the field from which the offenders had originally come. The offenders retreated as agreed. From then on, the rock was known as ‘Sword-Testing’ in honor of the valiant general.

Geographically speaking, the rift belongs to the terrane of limestone. Streams flow along it and cause corrosion, and a rift was thus formed. Today, since there is no more corrosion, the pillar cannot produce any deposits, and the rock will retain its odd shape forever.