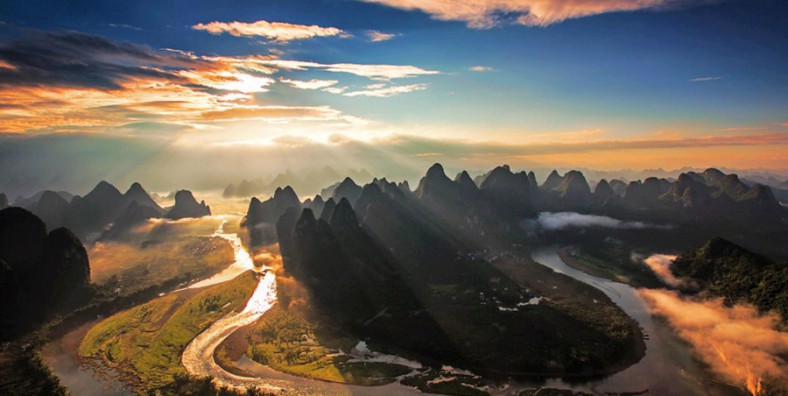 The Lijiang River is a unique and unique natural landscape nurtured by the river basin, and it is also the best in the world. Guilin's landscape is "the river is the green belt and the mountain is like jade hairpin". Its beautiful scenery, picturesque scenery and grotesque caves and rocks are famous scenic spots both at home and abroad.

Why is Li River So Special?

The Lijiang River tour from Guilin to Yangshuo is the center of the tour to the east and north of Guangxi. The beautiful karst peaks will surprise you at every corner of the clear river under the blue sky. Buffaloes patrol the fields, farmers harvest rice fields, and primary school students and fishermen drift by bamboo rafts. The scenery along the river is amazing, and the taste of life is far away from the concrete metropolis. It has become one of the largest tourist destinations in China.

Where is Li River

Lijiang River, belonging to the Xijiang River system in the Pearl River Basin, is a generic term for the upper reaches of the tributary Gui Jiang and is located in the northeast of Guangxi Zhuang Autonomous Region

Where does the Li River cruise begin?

The trip started from the wharf south of jiefang bridge in Guilin city. Otherwise, some travel societies will transport tourists to Zhujiang Wharf (Pearl River Wharf) or Mopanshan Wharf (Mopanshan Wharf) by one-hour bus, starting from the main part of the tour. English tour guides are only available on cruise ships leaving the Pearl River terminal, so for convenience, foreigners are advised to leave the terminal.

This mountain is solemnly located on the west bank of Lijiang River, like an elephant drinking water from the river with its long nose. It should be a landmark of Guilin scenery. You can find it in the travel brochure or books. The most impressive thing is said to be the reflection of the moon-like cave when the moon shines on the river, hence the name “water moon”.

A few minutes down from Xiangshan, it is an idyllic park on the east bank of the river. The park is famous for its beautiful natural scenery, including Douji Mountain (composed of Chuanshan and Pheasant Mountain), Baota shan, Moon Cave and Chuanshan Cave.

This ancient city is located on the north bank of Lijiang River and has maintained its ancient style since the Ming Dynasty (1368-1644). A sagging street flanked by old houses, shops and stalls extends two kilometers along the river bank through the town. When you occasionally go into shops, some well-preserved houses hidden behind the street doors may surprise you. These are the residences of businessmen in the past. Try dumping snacks or selling cars at roadside stalls. Some will surprise you with its taste and cheap price. The people in the town are very friendly to tourists. Further south, there is a single arch bridge in the town called Changsheng Bridge. This town is really a special place. Opposite the town on the other side of the river, a millstone-like stone and running water formed the scene of grinding the valley.

As travel agencies are basically buying tickets for the big Lijiang River, few tourists go to the Lijiang River Shipping Company to buy tickets themselves, and the shipping company does not have any outlets specifically for individual ticket sales, Guilin has not yet opened public transportation from the urban area to the dock to facilitate individual passengers.
(1) If tourists buy tickets to Lijiang River by themselves through other channels, they need to go to the dock by themselves. The only way is to take a taxi. Mopanshan dock and Zhujiang dock are 20km away from the city and the fare is about 100 yuan.
(2) If tourists buy ship tickets through travel agencies and hotel agents, the travel agencies will charge 35 yuan/person fares and tour guide service fees, so tourists can wait in the hotel, and there are tour buses and tour guides to pick you up directly from the hotel to the dock, saving the trouble of traveling.

1. Yangshuo Departure: (1) At Yangshuo North Passenger Station, there is a bus from Yangshuo to Di Yang Wharf (the license plate indicates “Di Yang” is a slow bus, which can be loaded and unloaded at any time). It starts at about 6:40 every day, takes 20 minutes/shift, takes about 1 hour by car, and costs 9.5 yuan/person. (2) A large number of people can choose to travel from Yangshuo County Chengbao van to Di Yang Dock, about 160-180 yuan, usually 6-7 people;
2. Guilin Departure: (1) Take the “Guilin-Yangshuo Shuttle” at Guilin Railway Station Square (slow train, every 10 minutes/shift) and get off at the junction of Di Yang (less than Di Yang Dock) for about 1-1.5 hours. The fare is about 15 yuan. Then change to a minibus from Yangshuo to Di Yang Dock at the junction. The fare is about 3 yuan/person, about 15 minutes. (2) At Guilin bus station (about 15 minutes’ walk from the railway station square), you can take the local bus (non-direct bus) from Yangshuo, Lipu, Pingle and Gongcheng to the junction of Di Yang. After that, the method is the same as (1)

from Xingping to Yangshuo by bus, 7 yuan/person

Ticket: Guilin-Yangshuo 210 RMB/Di Yang-Xingping 216 RMB/Di Yang-Jiuma Huashan 95 RMB/Xingping-Jiuma Huashan 80 RMB (January 1-December 31, Monday-Sunday)
Fare information is for reference only, and the specific details are subject to the actual conditions of the scenic spot.

3 thoughts on “Li River in Guilin”