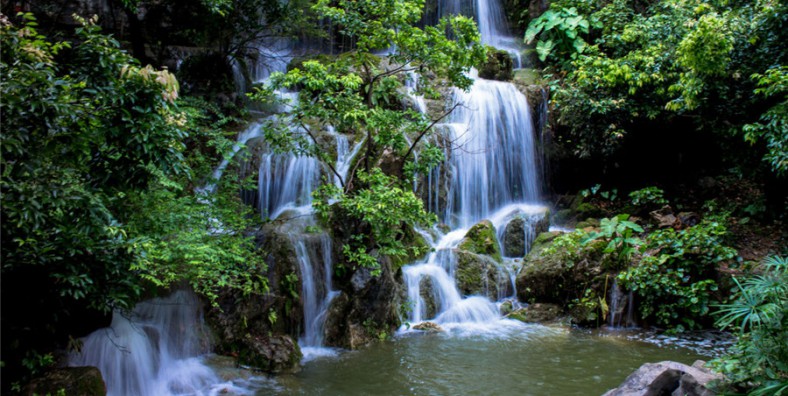 Why is Seven Star ParkSo Special?

Where is Seven Star Park

Located at the east bank of Li River, the park is 1.5 kilometers (0.9 mile) from the downtown area of Guilin. It was so named because of the seven peaks, the four peaks of Putuo Mountain and three of Crescent Mountain, inside resemble the form of the Big Dipper constellation.

The Huaqiao Bridge built in the Song Dynasty (960-1279) is the oldest bridge in Guilin. Every spring and summer, it starts with blooming flowers and streams, hence the name “Huaqiao”. The highlight of this bridge is that the arch’s reflection in the water always looks like a full moon. Even if the amount of water changes, it will not change.

Camel Mountain in Seven Star Park, like a lifelike dumpy camel, is located behind Mount Putuo. It was once called Hu Shan because its shape was like a flagpole. A hermit of the Ming Dynasty once lived here and planted a large number of plum trees. In spring, the blooming plum blossom, together with the sunrise or sunset light, gives the mountain a brilliant glow. This is one of the ten sights in Guilin. Around the hill are bonsai gardens, Guilin zoo and tea houses.

Crescent Mountain is to the south of Putuo Mountain. It is named after the crescent-shaped stone on its abdomen. This mountain is famous for its vegetarian diet with a history of more than 100 years. Nun noodles are really worth tasting. Walking along the stone steps, you can see the Half Moon Pavilion, Crescent Stone and Guanghan Pavilion. Standing here, the scenery of Guilin even greets us! At the foot of the southwest is the Guihai Forest of Steles, which consists of the Hidden Cave in monster hunter, Long Yin. There are more than 220 inscriptions in the forest of steles, involving poems, poems, couplets and images in political, economic, cultural and military fields. The inscriptions on the stele are regular script, cursive script, seal script and documents.

The light of China square lies between mount putuo and crescent mountain. It has two kinds of crafts, one is stone carving murals, the other is the century’s precious ding. This fresco consists of more than 100 stone carvings, which is a miniature of 5000 years of Chinese civilization. Shi Ji Bao Ding, a 4.6-meter (15-foot) high four-legged tripod, symbolizes the prosperity of the country and the peaceful coexistence of the people.