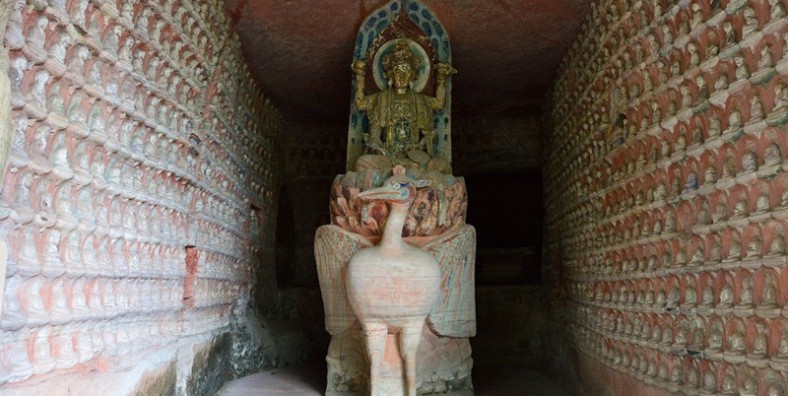 The Dazu Rock Carvings(Chinese: 大足石刻; pinyin: Dàzú Shíkè) are a series of Chinese religious sculptures and carvings located in Dazu District, Chongqing, China. The carvings date back as far as the 7th century AD, depicting and influenced by Buddhist, Confucian and Taoist beliefs. Some are in rock-cut cave shrines, in the usual Chinese Buddhist style, but many others are rock reliefs carved into the open rock faces.

Where is Dazu Rock Carvings

Listed as a World Heritage Site, the Dazu Rock Carvings are made up of 75 protected sites containing some 50,000 statues, with over 100,000 Chinese characters forming inscriptions and epigraphs. The sites are located in Chongqing Municipality within the steep hillsides throughout Dazu County, located about 165 kilometers west of the urban area of Chongqing. The highlights of the rock grotto are found on Mount Baoding and Mount Beishan.

The carvings were listed as a World Heritage Site in 1999, citing “…their aesthetic quality, their rich diversity of subject matter, both secular and religious, and the light that they shed on everyday life in China during this period. They provide outstanding evidence of the harmonious synthesis of Buddhism, Taoism and Confucianism.”

The earliest carvings were begun in 650 AD during the early Tang dynasty, but the main period of their creation began in the late 9th century, when Wei Junjing, Prefect of Changzhou, pioneered the carvings on Mount Beishan, and his example was followed after the collapse of the Tang dynasty by local and gentry, monks and nuns, and ordinary people during the Five Dynasties and Ten Kingdoms period (907-65). In the 12th century, during the Song dynasty, a Buddhist monk named Zhao Zhifeng began work on the elaborate sculptures and carvings on Mount Baoding, dedicating 70 years of his life to the project.

Off-limits to visitors for many years, the carvings were opened to Chinese travelers in 1961 and foreign visitors in 1980. Until 1975, there was only a muddy path between the town of Dazu and the main cluster of carvings. The isolation helped keep the art unharmed during the massive anti-religious vandalism of the Cultural Revolution.

It’s the most convenient to take a bus from Chongqing to Dazu. It just takes 2 hours to arrive there. There are tens of buses in the Chongqing West Bus Station.