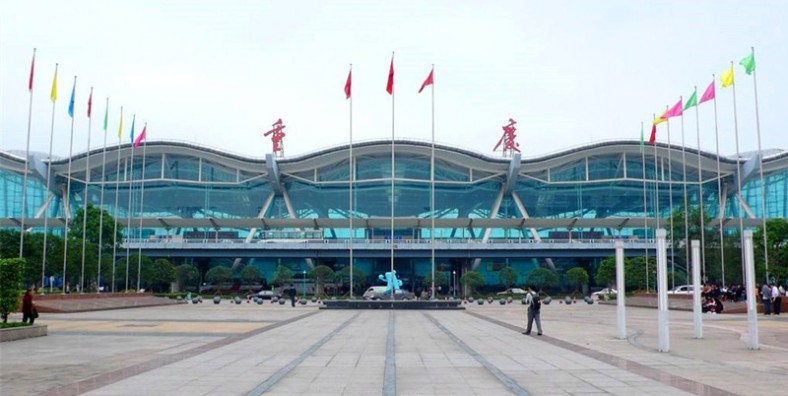 Chongqing Jiangbei International Airport (IATA: CKG, ICAO: ZUCK) is located in the Yubei District of Chongqing, People’s Republic of China. The airport’s IATA Airport code, CKG, is derived from the city’s former romanized name, Chungking. Jiangbei airport is also a 72-hour transit visa-free airport for foreigners from many countries. In 2017, it was awarded first place in the “Best Airport in the 25–40 Million Passenger Size” category by Airports Council International.[3]

The airport is operating three terminals: Terminal 2 serving domestic flights and Terminal 3A other domestic flights and all international flights while Terminal 1 is currently closed. The first, second, and third phases of the airport came into operation in January 1990, December 2004, and December 2010, respectively. Terminal 2 is capable of handling 15 million passengers and Terminal 3A is able to handle 45 million passengers annually.[4]

The civil aviation of Chongqing dates back to the 1920s. After the completion of Baishiyi Airport in 1938, Chongqing became one of the four cities in China that had an airport in operation. In 1950, four flight routes from Tianjin, Chengdu, Guangzhou and Kunming to Chongqing became the earliest to be opened after the establishment of the People’s Republic of China in 1949. In 1965, the Civil Aviation Administration of China opened an office in Sichuan Province and Chongqing Airport became subject to it. The development of Chongqing’s civil aviation then stopped until the 1990s.[5]

On 22 January 1990, the new airport, Chongqing Jiangbei Airport was opened to replace the old Baishiyi Airport. The development of the civil aviation resumed. In 1997, when the Chongqing area became the 4th municipality of China, Civil Aviation Administration of China established a branch in Chongqing in the same year.

Chongqing Jiangbei International Airport is currently undergoing a major expansion, with a vision of obtaining a major international air hub and becoming the largest airport in western China by 2030.[6] Jiangbei Airport has been outlined ambitious growth plans, competing with Chengdu Airport, Kunming Airport, Wuhan Airport and Xi’an Airport to be recognized as the nation’s fourth largest aviation hub (after those hubs in Beijing, Shanghai, and Guangzhou).

Jiangbei Airport was reported to have reached the fastest growth rates since 2011, according to CAPA’s Airport Traffic Benchmark Tool. On 1 November 2015, the annual passengers at Jiangbei Airport exceeded 30 million for the first time.

The expansion project Phase III, which included a second runway and an additional Terminal, T2, started construction in 2007 and completed in 2010. Major elements of the construction were adding a second runway of 3,200 meters (which was later lengthened to 3,600 meters to satisfy the landings and takeoffs of Boeing 747 and the demands of Hewlett-Packard Development Company, L.P.) to the east of the existing runway, building a parallel taxiway in between the two runways, and setting up a visual aid lighting support system. It also added a second terminal building (T2) with an area of 86,000 square meters, 41 apron aircraft parking stands, and a freight station and support facilities occupying an area of 20,000 square metres (220,000 sq ft). It cost CNY3.3 billion (USD538 million).[7] On 22 December 2010, the second runway was commissioned, which made Jiangbei Airport the fourth airport in mainland China to operate two runways, one exclusively for departures and the other exclusively for arrivals.[citation needed]

The current major expansion – Phase IV – of Jiangbei Airport contains the construction of a third runway and a new terminal, T3A, which is expected to be 530,000 square meters,[8] more than double the size of the existing terminals (T1 and T2A/T2B) combined, costing CNY26.0 billion (USD4.1 billion). T3A is expected to be completed by the end of 2016, after which the airport will have more than 725,000 square meters of terminal floor space, ranking Jiangbei Airport among China’s 15 largest airports with an annual passenger capacity of 60 million and an annual cargo capacity of 2 million tons.[citation needed] Half of the new terminal is currently planned for international flights from major cities in South East Asia, East Asia, Middle East, Africa, Europe, and North America. After the completion of expansion Phase IV, Jiangbei Airport will become the 4th airport in China (inc. Hong Kong, Macau, and Taiwan) that has three runways in operation, of which Runway #3 (03/21) will be operated independently on top of the pair #1 (02L/20R) and #2 (02R/20L).

There is a fifth phase of expansion planned for Jiangbei Airport which is expected to include a new terminal, namely T3B, and a fourth runway. This phase will be finished in the mid-2020s.[citation needed]

Note: Remote bays include the ones that serve the air freighters.

Before 2010, Chongqing Jiangbei International Airport’s international destinations all terminated in East and Southeast Asia, including direct flights to Tokyo (has stop-over in Beijing or Shanghai), Seoul, Singapore, Bangkok, Phuket, Siem Reap, etc. However, this situation was changed in 2011 with Qatar Airways and Finnair opening new routes to Doha and Helsinki, respectively.[10][11]

With the new T3A terminal in operation since August 2017,[12] the airport has had multiple new international routes with non-stop flights to London, Dubai, Los Angeles, New York, Sydney, Melbourne, Rome, Paris, etc.[13] T3A Terminal and the third runway of Chongqing Jiangbei International Airport started operation at 06:00 on August 29, 2017. In the meantime, T1 was temporarily closed, T2 only for domestic flights of Sichuan Airlines, West Airlines, Huaxia Airlines and Spring Airlines, and the remaining flights were transferred to T3A. In addition, the airport operates a free trans-shipment shuttle between T2 and T3A in a 24-hour operation.[14]

The following airlines operate regular scheduled flights to and from Chongqing

The airport’s ground transportation is developing very fast. Four highways around the airport are under construction, as part of plans to turn Chongqing into an integrated regional transport hub in western China.[66] There will be a 300,000-square-meter (3,200,000 sq ft) transportation transfer centre in T3A, which will include inter-city rail, light rail and subway.

Airport Express lines are easily accessible at Terminal 2 and 3.

There is a transfer center for long-distance coaches between Terminal 2A and Terminal 2B, and it offers bus services to nearby cities in Sichuan and Guizhou Province, as well as suburban areas of Chongqing Municipality.

The airport has four parking lots:

Chongqing Rail Transit Line 3 runs from Chongqing Jiangbei International Airport’s Terminal 2 station, going through the city center via Lianglukou station and onto its final stop, Yudong, covering a distance of 60 kilometres (37 mi). It takes around 50 minutes to get to the city center (Lianglukou).[71]

Line 10, serves as the second metro line connecting the urban areas of Chongqing and the airport. [72] One station of Line 10 is at Terminal 3 and the other is at Terminal 2. This line runs under Runways #1 (02L/20R) and #2 (02R/20L), connecting Terminal 2 and Terminal 3 in landside. Line 10 is the only metro line access to the new Terminal 3, while Line 3 will not be elongated to Terminal 3. Line 10 also reduces the travel distance between Chongqing Jiangbei International Airport and Chongqingbei Railway Station, which can facilitate the transfers of passengers between air and rail.

Terminal 3A has a huge underground railway station that will open in 2019 that will connect cities as far as 300 kilometers away, thus allowing Chongqing Jiangbei International Airport to serve a significantly larger population. The speed of the trains is designed to be 250 to 300 kilometers per hour, allowing journeys to take less than one hour from a relatively faraway locations within the Greater Chongqing Municipality.[73]

The headquarters of China Express Airlines are on the airport property.[74]