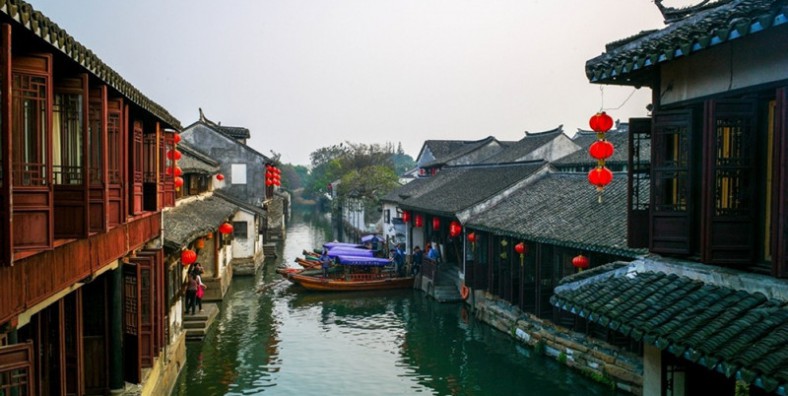 Zhouzhuang, one of China's most famous water villages, is located in Kunshan City, only 18 miles (30 kilometers) southeast of Suzhou. It is famous for its deep cultural background, well-preserved ancient dwellings, elegant waterscape and rich local color traditions and customs.

Why is Zhouzhuang Water Town So Special?

Zhouzhuang, located in Kunshan, Suzhou, is one of the six ancient towns in the south of the Yangtze River. It was named as a famous town in Chinese history and culture in 2003. Zhouzhuang has a long history, is a typical style of water villages in the south of the Yangtze River, has a unique cultural landscape, and is a treasure of Chinese water village culture and Wu local culture.

Where is Zhouzhuang Water Town

Zhouzhuang, one of China’s most famous water villages, is located in the southwest of Kunshan City, Suzhou City, Jiangsu Province, only 18 miles (30 kilometers) southeast of Suzhou.

During the Spring and Autumn Period (770-476 BC), this small town was part of the fief of Yaocheng and was called Zhenfengli. In the Northern Song Dynasty (960-1127), a very devout Buddhist, Zhou Degong, donated it to Quanfu Temple. It took its present name as a memorial to the donor.

In 2003, it was named a famous town of Chinese history and culture.

Zhouzhuang water village is surrounded and divided by lakes and rivers. Fourteen stone bridges span the river, showing the unique features of the watery region. The double bridge, which consists of Shide Bridge and Yong ‘an Bridge, is the most famous and is regarded as a symbol of a peaceful town. Shuangqiao was built during the Wanli period of the Ming Dynasty (1573-1619) and is located in the northeast of the town. In 1984, 38 oil paintings by famous painter Chen Yifei were displayed in new york Gallery named after armand hammer, chairman of Western Oil Company. Memories of Hometown, depicting Shuangqiao, is one of the items on display and has won worldwide attention for Zhouzhuang Watertown. This painting was selected as the first day cover of the United Nations stamp in 1985.

Fu ‘an Bridge, located at the eastern end of Zhongshi Street, was built in 1355 of the Yuan Dynasty (1271-1368). The unique feature of Fu ‘an Bridge lies in the perfect combination of the single arch bridge and the bridge tower. There is no internal staircase connecting the ground floor and the second floor. People must make a detour through the bridge stairs to reach the second floor. The tower is used as a teahouse, restaurant and shop, providing a good place to enjoy the scenery during rest.

Shen Zhai was built in 1742 and is located on the east and south side of Fu ‘an Bridge. It is the private property of the descendants of Shen Wansan, the richest man in the south of the Yangtze River in the early Ming Dynasty. The whole building complex is Ming style, covering an area of more than 0.7 acres (2900 square meters). More than 100 rooms are divided into three parts, connected by arcades and aisles. The first is the lock and dock, where Shenyang berths ships and washes clothes. The middle part includes the gate house, the teahouse and the main hall. The brick gate house is carved with vivid and clever characters, telling historical stories or expressing good wishes, making it a rare artwork.

The house was built by the Xu family in the Ming Dynasty’s Zheng Tong era (1436-1449) and bought by the Zhang family in the early Qing Dynasty. Located to the south of Shuangqiao, Zhang’s Mansion has more than 60 rooms and covers about 0.44 acres (1800 square meters). As Zhu Jing flows through, Zhang Zhai is a neat and elegant house with a quiet courtyard and pond. The deep hall shows the seclusion of the former owner.

Once called the De’s Tavern, Milou Tower perches next to Zhenfeng Bridge which is at the southwest corner of Zhouzhuang Ancient Town. It is famous for being a rallying place of the literators in old times. Numerous poets, songs and stories about Milou Tower are wide spread and make it more charming.

March-April and September-October are the best travel times in Zhouzhuang Water Town.

Get to Zhouzhuang Water Town from Shanghai

Get to Zhouzhuang Water Town from Suzhou

Get to Zhouzhuang Water Town from Hangzhou

Take a bus from Hangzhou North Bus Station located at No. 766 Moganshan Road to Kunshan New Bus Station. Then take bus no. 130 or tourism bus. no 1 and get off at the town.

One thought on “Zhouzhuang Water Town in Suzhou”