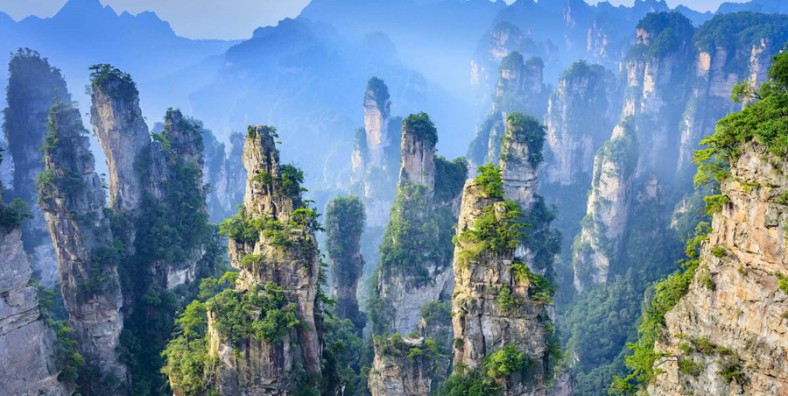 Zhangjiajie National Forest Park was the first national forest park in China, listed as UNESCO World Heritage Site in 1992. It is also famous for the inspiration for the movie AVATAR, the Hallelujah Mountain.

Why is Zhangjiajie National Forest Park So Special?

Zhangjiajie National Forest Park has been described differently, such as, majestic, eccentric, tranquil, delicate and wild. The park features grotesque peaks, lucid brooks, abundant fauna and floras and hospitable climate. There are six main attraction spots and over 90 smaller ones in the park to date.

In 1982 it was recognized as China’s first national forest park with an area of 4,810 ha (11,900 acres). Zhangjiajie National Forest Park is part of a much larger 397.5 km2 (153.5 sq mi) Wulingyuan Scenic Area. In 1992, Wulingyuan was officially recognized as a UNESCO World Heritage Site. It was then approved by the Ministry of Land and Resources as Zhangjiajie Sandstone Peak Forest National Geopark (3,600 km2 (1,400 sq mi)) in 2001. In 2004, Zhangjiajie geopark was listed as a UNESCO global geopark.

The most notable geographic features of the park are the pillar-like formations that are seen throughout the park. Although resembling karst terrain, this area is not underlain by limestones and is not the product of chemical dissolution, which is characteristic of limestone karst. They are the result of many years of physical, rather than chemical, erosion.

What to Do in Zhangjiajie National Forest Park

The whole of Zhangjiajie National Forest Park is huge with many different scenic areas. Plan well in advance to maximize your time in the places you are most interested in. The top-rated scenic areas are Yuanjiajie, Tianzi Mountain, and Gold Whip Stream. These three areas can be visited by tourists any age.

Walking is not hard at the main attractions, where cable cars, elevators, a tram, and shuttle buses are available andconcrete paths and steps have been built. The off-the-beaten-path scenic areas are quieter but require more hiking: Yangjiajie, Yellow Stone Village, and Old House Area.

How to Get to Zhangjiajie National Forest Park

If you want to get rid of hustle of transportation and troublesome navigation, you can book a private tour package which covers visiting, dining and transfer from us. Our local tour guide and driver will escort you Zhangjiajie   National Forest Park with speed and convenience, and take care of all the details. You just need to focus on travel.

Zhangjiajie Central Bus Station (near Zhangjiajie Railway Station) has regular tourist buses to Wulingyuan every a few minutes and the bus journey takes about 40 minutes. Bus fare is around CNY 12.