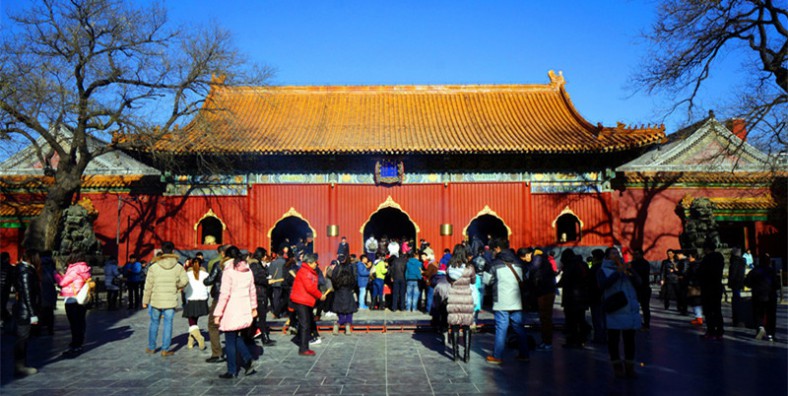 Why is Yonghe Lamasery so Special?

It is the largest Tibetan Buddhist temple in Beijing.

In the 32nd year of the reign of Emperor Kangxi of the Qing Dynasty, it became the residence of Yin Zhen, the fourth son of the Emperor. In 1983, it was designated by the State Council as the national key Buddhist temple in the Han nationality area.

The Yonghe Palace was originally the official residence of the Ming eunuch. Kangxi thirty-three years (1694) was founded, initially

In the 9th year of Ganlong (1744), the Lama Temple was converted into a formal Tibetan Buddhist temple and became the center of the Qing government in charge of Tibetan Buddhist affairs throughout the country.

After liberation, the government carried out comprehensive renovations in 1950, 1952 and 1979 and announced it as a national key cultural relic protection unit in 1961. Opened to the outside world in 1981.

In March 1961, the Lama Temple was listed as the first batch of national key cultural relics protection units by the State Council.

The layout of  the Yonghe Lamasery

Yonghe Palace faces south with a total area of 6.6 hectares. According to statistics in 1950, there were 661 rooms, of which 238 were Buddhist temples. Its architectural style is very unique, integrating the architectural arts of Han, Manchu, Mongolian and other nationalities. The entire temple building is divided into three roads, east, middle and west. The central route consists of seven courtyards and five halls, which form the central axis. There are also a variety of side halls and side buildings on the left and right.

Out of the Yonghe Gate, the courtyard is successively lined with bronze ding, royal tablet pavilion, bronze sumeru mountain, mani pole and Yonghe palace, the main hall.
The main hall was the place where Prince Yong received civil and military officials. After the Lama temple was rebuilt, it was equivalent to the main hall of the general temple. There are three bronze Buddha statues nearly two meters high in the north of the temple. There are two groups of Buddha statues in the third generation: Sakyamuni Buddha in the Sakyamuni world in the middle, and medicine guru Buddha in the eastern world in the left. On the right is Amitabha in the western world. This is the third Buddha in the space world, indicating that there are Buddhas everywhere.

Between the two stele pavilions is the Yonghe Gate, on which hangs the large plaque “Yonghe Gate” written by Emperor Ganlong, which is equivalent to the mountain gate and heavenly king’s temple of Han Buddhism. The bronze lion in front of the temple is vivid. On both sides of the hall, facing east and west, are the four heavenly kings of clay, gold and color sculpture.

Falun is the crystallization of the blending of Han and Tibetan cultures. In the center of the hall sits a 6.1-meter-high bronze Buddha on a huge lotus platform with a smiling face. It is the founder of Tibetan Buddhism Huangjiao, Master Zong Kaba. The bronze statue was made in 1924 at a cost of 200,000 silver dollars and took two years to complete. Behind the statue of Zong Kaba is 500 Luohan Mountain, which is reputed as one of the three unique wood carvings in the Yonghe Palace. It is nearly 5 meters high, 3.5 meters long and 30 centimeters thick. All of it is finely carved out of rosewood.

The first day of the first month marks the beginning of the new year. In the Qing Dynasty, at this time of year, the Qing Dynasty sent 36 monks from the Yonghe Palace to recite the “Happy New Year Sutra” in the main hall. Now, at 2: 00 a.m. on the first day of the first month, the monks get up to the temple and recite “the great weed king kong sutra” and “the auspicious heavenly mother’s prayer sutra” to pray for world peace, peace for the people and good weather for the year.

On this day, there are a lot of people who pay homage to the Buddha at the Yonghe Palace. The believers are devout in worshipping the Buddha, burning incense and changing scriptures. From their quiet prayers and happy smiling faces, we can see that they are full of confidence and hope for life and the future.

Yonghe Lamasery Temple is open to the public all year round.

Prince kung’s Mansion: Prince Gong’s palace went through the historical process of the Qing Dynasty from its heyday to its decline, carrying extremely rich historical and cultural information. Under Zhou Enlai’s concern, Prince Gong’s palace vacated and completed its renovation work in 28 years, making it the only Qing Dynasty Mansion in China open to the public at that time.

Beihai Park: Beihai Park, located in the center of Beijing City, is the oldest, best preserved and most profound classical royal garden in China’s existing history.

Shichahai: There are many palaces and gardens around Shichahai, hutongs and quadrangles that make up the customs and culture of old Beijing and the history of old Beijing.

One thought on “Yonghe Lamasery in Beijing”