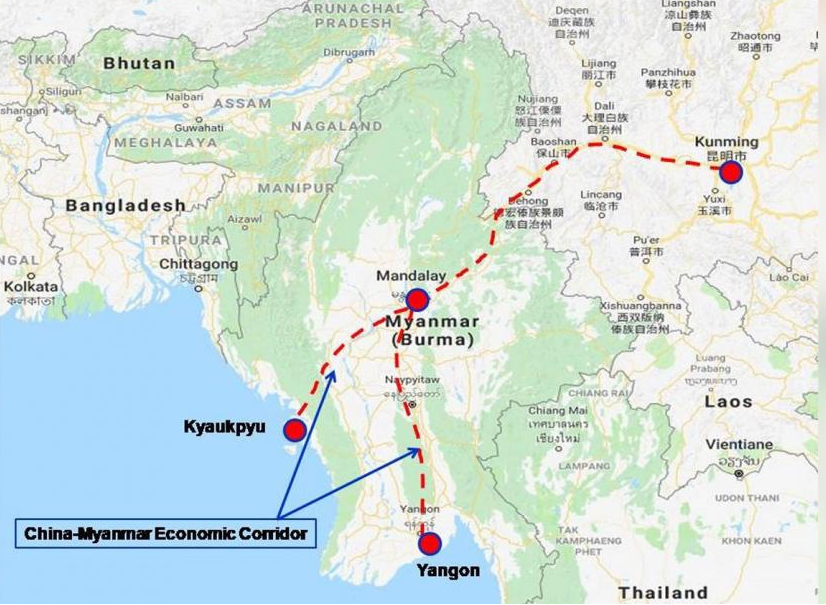 Myanmar signed a memorandum of understanding (MOU) for the project, expected to be one of the largest road and railway projects in the country, last October(10, 2018).

The project calls for the building of a high-speed railway line from Kunming, China, to Muse on the Myanmar-China border and from there to Mandalay and terminating in Kyaukphyu in Rakhine. The survey project Muse to Mandalay the 430km line is expected to support trains travelling at up to 160kmh and will feature seven cargo stations and five passenger stations.

China is said to view the project to connect the Kyaukphyu Special Economic Zone and deepwater port in Myanmar as something that will benefit both countries under the larger CMEC umbrella,.

“CREEC, at their cost, has started a ground survey for the project and wants to proceed with the construction, but Myanmar hasn’t given any commitment beyond signing the MOU,” U Htaung Shan Khan, general manager of planning and administration of Myanmar Railways told The Myanmar Times.

“They want to construct the railway and run trains, but we have to consider Myanmar’s own interests and policies and the surveying for the project in Mandalay has been allowed,” he said.

However, former Thibaw MP U Ye Tun, whose township is located along the projected route of the railway, says the survey should be conducted for the entire route instead of just from Muse to Mandalay.

“It would be wrong if just a portion of the project of the project’s route is surveyed. The survey should be all the way to Kyaukphyu. If not, the Kyaukphyu deepwater port may not be as viable as expected,” U Ye Tun said.

“The Kyaukphyu deepwater port includes investments from Myanmar and if the government doesn’t receive sufficient revenue from the port and it is not workable, I worry that the port will be like one in Sri Lanka that China took over,” said U Ye Tun.

To receive revenue from Kyaukphyu deepwater port, to ensure ships stop at the port and to draw investments to the Kyaukphyu Special Economic Zone, a trade route has to be established. If the railway doesn’t reach Kyaukphyu, the deepwater port and special economic zone will be in trouble, he said.

If Kyaukphyu does not connect China, which is the world’s main manufacturer, and the India Ocean, Myanmar needs to consider that the company that builds the deepwater port and the country will be affected, said U Ye Tun.

While the CMEC project calls for an economic corridor encompassing the Muse-Mandalay-Kyaukphyu and Yangon, the Ministry of Transportation and Communications says the railway project will only be from Muse to Mandalay for now.

“Even if it connects to Rakhine, I think goods that are transported by road will gravitate to Mandalay. Goods produced and exported from Yunnan will come down the economic corridor to Myanmar, so our market is Yunnan and their market is our entire country,” said U Htaung Shan Khan.

According to officials from Myanmar Railways, it is still unclear how the railway route will be extended to Kyaukphyu.

Under the ongoing surveys, reports have to be submitted within one year about the railway route, the effects to the public and environment along the route, and other appraisals, said U Htaung Shan Khan.

The Ministry of Transportation and Communications said a negotiation committee, which includes representatives from the ministry, was formed to start a feasibility study for the high-speed railway project.

If railroad passes through farmland, compensation will be provided.  However, with modern technology, tunnels may be built and that is why, not much farmland will have to be appropriated, U Htaung Shan Khan said.

CREEC is conducting the survey and also studying whether the railway will be operated jointly or if it should be run on a build-operate- transfer system for 30, 50, or 70 years. Once the survey is done and the government feels the project is feasible, then construction can begin, U Htaung Shan Khan said.

“Although the survey has begun, there is no guarantee that the railroad will be built. It will only become a reality if the government and the people agree to it,” he said.

It is not sure to build it although making survey. We don’t do any promise for building this railroad. We’ll do they don’t suffer grievance also. In our country, although there is survey, many projects won’t do. We’ll do it after government and public have a brainstorm and agree. There is no plan to build railroad once after doing survey,” he said.

“What is sure is there will be good impacts as well as bad impacts,” he said.

Another problem is that Myanmar’s railway network and railway communication system are not up to-date. The country’s railway lines utilise tracks that are one metre wide even as China’s trains run on tracks that are wider. This means Myanmars tracks, trains and carriages would all have to be upgraded at great expense.

Myanmar Railway’s meter gauge communication system will have to be gradually upgraded to ASEAN standards and its tracks widened, U Htaung Shan Khan said.

“It is for sure that the country cannot afford that kind of expenditure,” he said.

As the Chinese government has established banks for the One Belt One Road initiative, Chinese companies can borrow money from these banks for railway construction projects but for Myanmar there might be financial problems, said BRI project analyst U Ye Tun.

“We have to think if we will be able to lend money to companies if they win tenders. For example, if a Japanese company has won a tender for the project, where will the money come from? So, will we go for the build-operate-transfer system? Myanmar doesn’t have money and is in debt and so, BOT would be advisable,” he said.

As the project will be beneficial for the Chinese, our government should try to get its fair share as well. A 30pc share should be demanded for land of the project, he said.

“We only get 10pc in Myitsone and 15pc in the Kyaukpyu DeepwaterPort as well. It shows that our government doesn’t have financial vision like them. We should negotiate that we will lease the land and give permission for passage. But they will have to pay for the rest,” he said

“As it is a strategic route for both military and financial purposes, the project shouldn’t be carried out,” said political and economics analyst U Zaw Win Phay.

“The project will go from Muse to Mandalay and will continue to Kyaukpyu. TheChinese government want it toreach  Kyaukpyu and if so, the railway will be slicing Myanmar in half. It is good for Mandalay-Muse trade but from military perspective, the cons outweigh the pros,” he said.

“China’s intention is not only for economic purposes. It is not good for country from military perspective but China has a huge influence on our government,” he said.

“The more western countries put more pressure on Myanmar, the greater the influence of China becomes. This is the real situation. Speaking of the government, they have to consider from all sides. China has always been the only country to protect Myanmar applying their veto power every time Myanmar has to face the votes at the UN. So it wouldn’t be wise to go against them without taking these facts into consideration. However, despite the facts, taking the long-term benefits of the country into account, it is hard to say to consider the project as good.” said U Zaw Win Pe.

“It is right that it should be done but never with our our eyes closed. There are things that should be given careful thoughts. There are some that should be postphoned, and some that can’t be done for the time being. So, what kinds projects they might be, the extent to which the actual development of the nation and its people these projects can deliver will have to be taken into consideration.” said U Tun  Tun Naing, Minister for Planning and Finance.

There are over 60 countries in Chinese government’s BRI Project, and Daw Aung San Suu Kyi signed the membership agreement during her visit to China in 2017.

If Myanmar is involved in the project, it has to worry about the influence of foreign governments. If Myanmar is not involved, a  second route via Vietnam, Laos, Thai and Singapore is possible, leaving, Myanmar out of the picture.

Rakhine Ethnic Affairs Minister U Zaw Aye Maung said,”On that train, Myanmar must be allowed to ride. BRI is a good opportunity for us. If we can’t handle it, our identity, sovereignty and resources will be taken and shared by them. Not only hardware but also software must be considered. We must protect with laws.”