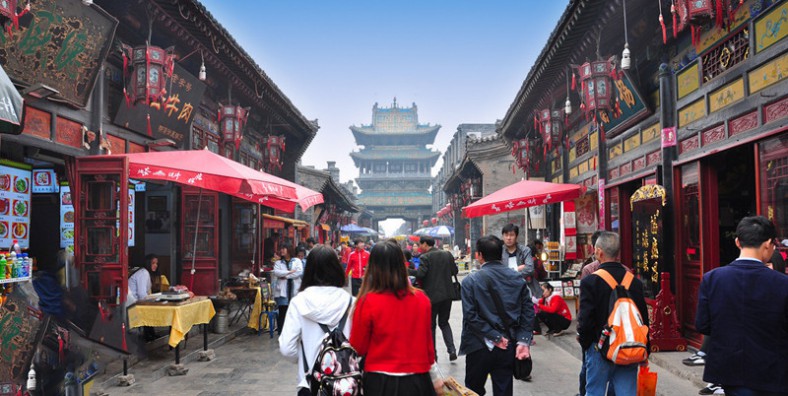 Ming and Qing Dynasties Street is also called South Street(南大街), which is located on the central axis of Pingyao ancient city, Shanxi Province. It has been the main commercial avenue in Pingyao for centuries. This ancient street is 400 meters long, there are 78 ancient shops and stores on it, almost all the businesses of that time were included.

Pingyao Ancient City was first built at Zhou Dynasty, extended at Ming Dynasty, and became the economic center of China at Qing Dynasty. Ming and Qing Street got its name from this. At that time, half of China’s private banks set their headquarters at the street, such as the well known exchange shop Rishengchang(日升昌票号). This is why the street is also call the Wall Street of Ancietn China.

Shanxi Province is not only famous for its Pingyao Ancient City, but also for its merchant. We call them Jin merchant(晋商). They are the most wealthy and famous merchant all over the county at that time. For them, the street is a golden land. The merchant families set up stores, private banks at the street. The street became the business center and the stage of the merchant at Ming and Qing Dynasty.

Ming and Qing Dynasties Street is 119km from Taiyuan(太原), the capital of Shanxi Province.

Autumn and Winter are the best time to visit Pingyao. For Autumn, there is Pingyao International Photography Festival waiting for you. For winter, you can enjoy the beautiful snow scenery at Pingyao Ancient City.

The entrance ticket of Pingyao Ancient City is 125 CN￥ per person. The Ming and Qing Dynasties Street is free.

2 thoughts on “Ming and Qing Dynasties Street in Pingyao”