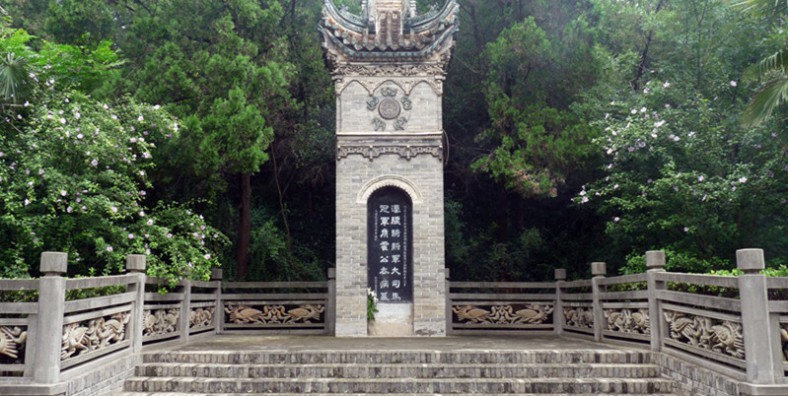 The tomb of Huo Qubing, who was a great general during the reign of Emperor Wudi of the Western Han Dynasty (206B.C.-24A.D.), is 1 km (0.62 miles) east of the Maoling Mausoleum in Xingping County, Xian. As a great general who had never been defeated, Huo Qubing was respected and favored by people and Emperor Wudi. Hence, after his death, Emperor Wudi ordered that a grand tomb be built for him.

Recommended Visiting Hours: about an half hours

Why Visit Tomb of Huo Qubing?

Where is The Tomb of Huo Qubing？

The tomb of Huo Qubing, who was a great general during the reign of Emperor Wudi of the Western Han Dynasty (206B.C.-24A.D.), is 1 km (0.62 miles) east of the Maoling Mausoleum in Xingping County, Xian. Northwest of Daochang Village, Nanwei Town, Xingping City, Shaanxi Province.

Huo Qubing (140 BC-117 BC) was a very outstanding and brave general in the Western Han Dynasty (206 BC-24). He and his uncle Wei Qing led the troops to repulse numerous incursions by the Huns and brought peace and prosperity to the society.
See more about Wei Qing and Huo Qubing Beat Back the Huns

In 117 BC, he died at the age of 23, which was a great loss to the whole society. Emperor Wudi (156 BC-87 BC) and the entire nation felt very sad for this war hero’s death, so the Emperor gave orders to hold a ceremonial funeral for him and built a spacious tomb for him just beside the Emperor’s own. This is the present Tomb of Huo Qubing.

To this day there are still many beautiful legends about Huo Qubing spread among the people living in the Qilian Mountain. According to the people in Jiuquan City, Gansu Province, after Huo Qubing and his troops defeated the Huns here, the Emperor vouchsafed good wine to this general to reward him for his great achievement. Instead of enjoying the wine all by himself, Huo poured it into the spring pond and drank it with all his subjects. And from then on, the place was named as Jiuquan (the spring of wine).

To the present day, joss sticks, candles and paper money have never ceased burning throughout the year in the temple at the Tomb of Huo Qubing. Some people are doing so with the hope that he would ‘help to avert disasters and cure their diseases,’ because ‘qubing’ in Chinese means ‘curing disease.’

Stone Carvings in front of the Tomb of Huo Qubing

Altogether there are 16 stone carvings in front of the Tomb of Huo Qubing, including a galloping horse, a recumbent horse, a bull, a tiger, a wild boar, a toad, a stone fish, a sleeping elephant, a stone man, an ape and a bear. These large groups of carvings comprise an illustrious example of the art of stone caving in the Han Dynasty (206 BC-220). It is the best preserved carving heritage in China.

‘Horse Treads on the Hun’ is the main statue placed in front of the tomb with its length of 1.9 meters (about 6.2 feet) and its width of 1.68 meters (about 5.51 feet). In this carving, a stone horse is standing on the ground with perked head and long horsetail. Under its abdomen is a struggling Hun with bow and dagger in his hand. The whole carving is the most representational monumental work and holds an important place in the history of Chinese art.

Horse treads on the Hun 馬踏匈奴

“Horse treads on the Hun” is a stone carving, most known and impressive of those found in front of Huo Qubing’s tomb. It calls up images of the young general galloping across fields in battle with slave-owning Hun aggressors. Majestically, the horse is holding its head proudly erect, symbolizing the heroic posture of General Huo Qubing and his brave army, while under the horse’s feet is the figure of an old and useless Hun slave owner, defeated and in the throes of death. At 168 centimeters high and 190 centimeters long, the horse is heroically and vividly life like. The horse carving is well proportioned, with a simple and pithy style. The slave owner, on the other hand, is roughly fashioned, making it dear what is primary and what is secondary in the work.

Though this stone carving is also of a horse, the artistic mood is different from that of the “Horse treads on the Hun.” The latter depicts posture of stillness while the former is of a horse in motion. With its forelegs bent, its head raised and its chest thrust forward, the horse appears to be surging forward with body into a jump. Particular care was taken in the carving of the horse’s head. With its eyes open wide, its nostrils flaring and with teeth bared, the horse seems to jump to the shouts of men and to its own neighing. The carved figure utilized the contours of a natural stone, with only a few lines chiseled to exploit natural contours in some places and with full carved relief in others, producing a work with pleasing results.

The posture of this horse is one of rest, seemingly carefree and content after returning from battle. The horse lies on the ground, head alertly turned to the left and right foreleg bent a bit as it looks ahead without relaxing its will to fight. It appears to be awaiting a master’s order. At 114 centimeters high and 260 centimeters long, it is a strong and sturdy horse. Assembled from several stones, this stone animal was shaped in full relief with simple, clear strokes. The fact that the horse is healthy and strong with full, clear musculature is a tribute to the majesty of the horses which performed brilliantly during the war of resistance against the Hun.

How to get to The Tomb of Huo Qubing

If you want to get out of the traffic and hassle of navigation, you can book a private tour package that includes visiting, dining and transfer from us. Our local guide and driver will escort you to the Tomb of Huo Qubing in Xianyang in the fastest and most convenient way and take care of all the details. You just have to focus on the visiting.

How to Get to Xian/Xianyang

Xian has long been the pivot of transportation within China and abroad. Xianyang International Airport , one of the four largest international airports in China, has opened more than one hundred air routes within China and more than a score abroad. Xian Railway Station is one of the most important stops of New Eurasian Continental Bridge in China. Road lines and national highways also intercross in the city. Besides, it is easy to catch a bus and hire a taxi or car in the city. Special sightseeing buses are also available to get to some main attractions in the city.