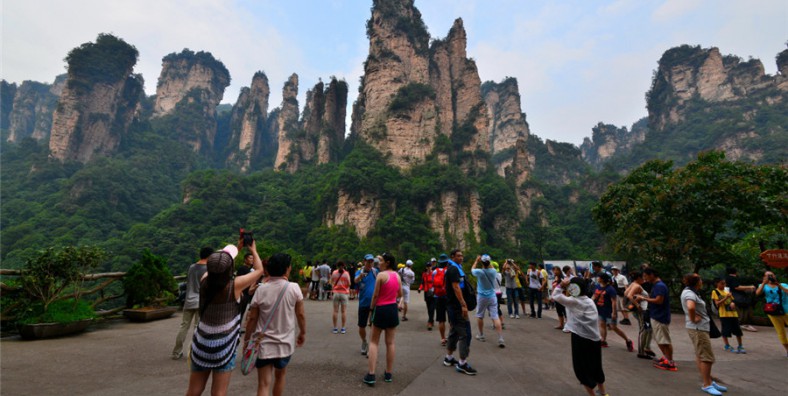 Golden Whip Stream (Jinbianxi), or Golden Whip Brook is a part of Wulingyuan Scenic and Historic Interest Area, the natural heritage of the world. The stream, with 7.5 km's length, is named after one of the 10 wonders of Zhangjiajie - Golden Whip Rock.

Why is Golden Whip Stream So Special?

Golden Whip Stream meanders 7.5 km, flowing between steep grotesque peaks and luxuriant trees. Here, the meandering streams, the crystal-clear water, exotic plants and rare animals co-exist and constitute the extraordinarily beautiful, tranquil and natural ecological environment. No wonder it is called “the most beautiful valley in the world”, “the most poetic stream” and “the most stunning hiking trail in Wulingyuan”.

Golden Whip Stream Scenic Area is a golden tourist area in Zhangjiajie with a total length of 5,700 meters. Located in the east of Zhangjiajie National Forest Park, named after the 380-meter high Golden Whip Rock, Golden Whip Stream meanders 7.5 kilometers. Flowing from Laomo Gully first to Confluence of Four Rivers then to Suoxi Stream, it finally joins Li river, one of the four rivers in Hunan Province. It flows between steep grotesque peaks and luxuriant trees. Here, the meandering streams, the crystal-clear waterfalls, exotic plants and rare animals co-exist and constitute the extraordinarily beautiful, tranquil and natural ecological environment. No wonder it is called “the most beautiful valley in the world” and “the most poetic stream”. The major scenic spots include Rock of Welcoming Guests, Golden Whip Rock, Reunion Rock and the Purple Grass Pond.

Golden Whip Rock is a representative among the countless strange rocks in Zhangjiajie. It stands between mountains. The marvelous shape is looked like the military arm whip, thus its name.

On the left side of the Golden Whip Rock, there is a peak like an eagle. The head is high, the mouth is hooked, the double-winged fight, close to the golden whip rock, seems to be fighting with the enemy who invaded the golden whip, known as the Shenying Hubian.

Fish Jumping Pool is a pool cause by the pulling stream. Stream flows from the higher place to the lower reach so that there is a pool made by the power of the water. During the spawning time, fish will swim to this pool and jump joyfully, thus its name.

There is a rock called Wenxing Rock which means a star in the literature field. Because this rock is looked like the figure of Lu Xun, a great litterateur in Chinese history, so people title this rock into Wenxing Rock.

This crag is looked like a person who is smiling to entertain visitors. And the cliffs between this crag just naturally shaped as a opening door. From this scene, visitors feel being entertained and waited by host.

The Grave of Zhang Liang

On the platform under Boliu Crag in the Golden Whip Stream is the Grave of Zhang Liang, who was the Marquis and the military counselor during the Western Han Dynasty (206 B.C- 25 A.D.).The legend goes that he lived as a hermit in Wulingyuan Scenic Spot after he had helped Liubang be the first emperor in the Western Han Dynasty (206 B.C- 25 A.D.) and he was buried here as well. Now the Grave of Zhang Liang becomes one of the most important culture relics in the Golden Whip Stream.

Golden Whip Stream is suitable for tourism all year round, with clear water, fresh air, lush vegetation, beautiful and quiet environment, especially in spring and autumn. Flowers bloom in spring, the scenery is fascinating; The leaves turn yellow in autumn, it becomes a golden yellow world.

How to Get to Golden Whip Stream

If you want to get rid of hustle of transportation and troublesome navigation, you can book a private tour package which covers visiting, dining and transfer from us. Our local tour guide and driver will escort you to Golden Whip Stream in Zhangjiajie with speed and convenience, and take care of all the details. You just need to focus on travel.