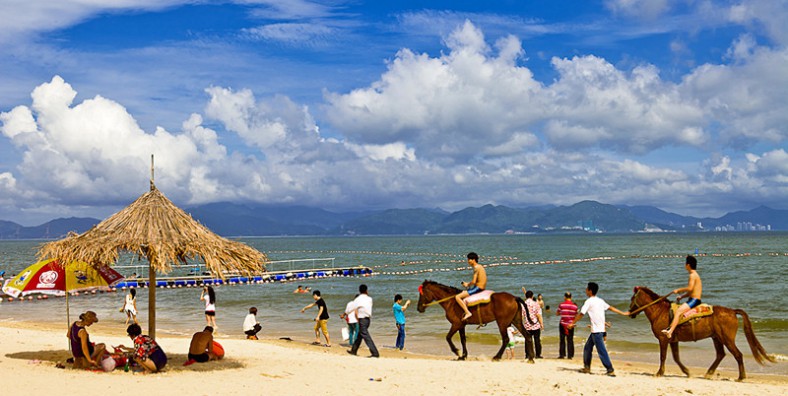 Daya Bay also formally known as Bias Bay, is a bay of the South China Sea on the south coast of Guangdong Province in the People's Republic of China. It is bordered by Shenzhen's Dapeng Peninsula to the west and Huizhou to the north and east.
English Name:
Daya Bay in Huizhou City
Chinese Name: 惠州大亚湾
Season: Summer
Recommended Visiting Time: 1 or 2 days
Tickets: Free
Address: Dayawan, Huiyang District, Huizhou City, Guangdong Province

Daya Bay (simplified Chinese: 大亚湾; traditional Chinese: 大亞灣; pinyin: Dàyà Wān; Jyutping: daai6aa3 waan1), also formally known as Bias Bay, is a bay of the South China Sea on the south coast of Guangdong Province in the People’s Republic of China. It is bordered by Shenzhen’s Dapeng Peninsula to the west and Huizhou to the north and east.

The bay was a hideout of pirates in the 1920s when the Republic of China government was occupied conducting the Northern Expedition. The bay is now an important contributor in the energy sector for Guangdong province.

Historically, Daya Bay had whales and turtles. The bay was one of the breeding grounds along the southern coast of China for Asian population of gray whales which are now one of the most endangered whale population in the world. They migrated here to calve in the winter-spring seasons. Other species, such as humpback whales also migrated here historically. All of these were wiped out by Japanese whalers established whaling stations on various sites on Chinese coasts including at nearby Daya Bay. Critically endangered Chinese white dolphins and occasional whales such as humpbacks have been confirmed in the bay recent years.

If you are unfamiliar with “little laurel squid” and “Sanmen lobster” in seafood, you should come to Daya Bay, Huizhou, which is famous for its high-quality seafood, especially the two mentioned above. As a charming seaport, Huizhou Daya Bay also has many scenic spots, such as: Xiayong Daya Bay Huahai amusement park, like horsewhip Island, like Tiger Island, Panda Gold Coast, etc. Dongsheng fishing village is an island in the sea. People in the fishing village have their own folk customs. The fisherman’s music provided for tourists will give tourism an experience what is “eating at the fisherman’s house, living at the fisherman’s house, and traveling at the fisherman’s house”. The charming Dajia island is a good place for tourists to spend their holidays. Many tourist attractions developed with the characteristics of the sea are the best places for friends who yearn for seaside tourism.

If you want to get rid of hustle of public transportation and troublesome navigation, you can book a private tour package which covers sightseeing dining and transfer from us. Our local tour guide and driver will escort you to Guangzhou with speed and convenience, and take care of all the details. You just need to focus on sightseeing.

Each room at this hotel is air-conditioned and is equipped with a TV. You will find a kettle in the room. The rooms include a private bathroom. For your comfort, you will find slippers and free toiletries. You will find a 24-hour front desk at the property. Shenzhen Bao’an International Airport is 73 km away. Huiyang is a great choice for travellers interested in business, the seaside and beaches.