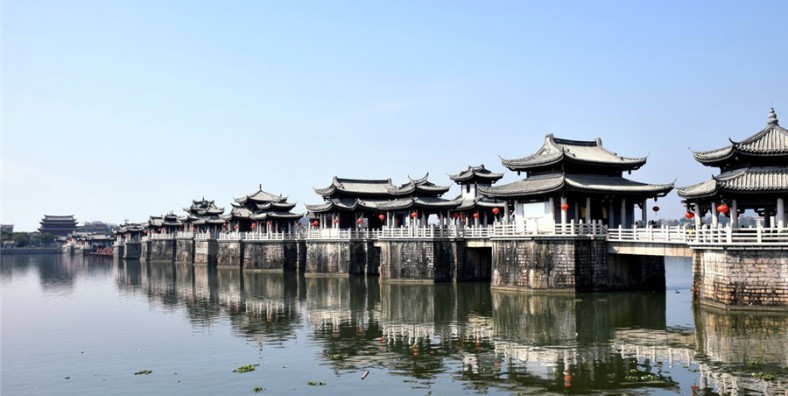 Guangji Bridge, also known as Xiangzi Bridge, is an ancient bridge that crosses the Han River east of Chaozhou, Guangdong province, China. This bridge has the features of a beam bridge, arch bridge, and pontoon bridge, which makes it unique in China.

Why Is Guangji Bridge So Special

Guangji Bridge is a Major Historical and Cultural Site Protected at the National Level on account of its storied history and ability to open and close for the passage of large boats. As the world’s oldest opening and closing bateau bridge, the saying goes that to visit Chaozhou without viewing the bridge is to have missed the town altogether. Standing as an exquisite example of period architecture and Chinese ingenuity, the bridge is a tourist hotspot lauded as one of China’s four most famous bridges.

Guangji Bridge, known as Kangji Bridge, Dinghou Bridge, Jichuan Bridge, commonly known as Xiangzi Bridge. Ming Dynasty style is still very obvious, simple and dignified. At 3-4 p.m. every day, it is forbidden to pass. The link bridge in the middle opens to let the big boat pass. Once we cross the bridge, we send postcards (tickets) home, which is very meaningful. The earliest open-closed bridge “Xiangzi Bridge”, with its unique style of “Eighteen Shuttle Boats and Twenty-Four Continents”, is also known as Zhaozhou Bridge, Luoyang Bridge in Quanzhou, Lugou Bridge in Beijing (also known as Lugou Bridge) and the four ancient Chinese bridges. Bridge. Guangji Bridge, which integrates beam bridge, pontoon bridge and arch bridge, is an isolated case of ancient bridges in China. On the eve of liberation, Guangji Bridge was already fragmented. In 1958, the whole bridge was strengthened and repaired. Eighteen shuttles were dismantled and rebuilt into three-hole steel frame and two high-pile cap bridges. In October 2003, Guangji Bridge began to be fully repaired. In general, it was repaired according to the Ming Dynasty style, and its function was positioned as a tourist pedestrian bridge. It was completed in 2007.

Local Language about the Bridge

How to Get to Guangji Bridge