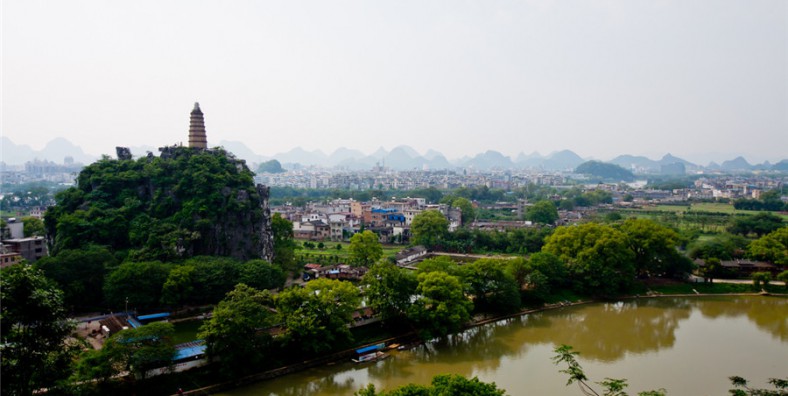 Chuanshan park is famous for its Cockfighting Hills, formed by the Chuanshan Hill and Pheasant Hill. The two hills together resembles 2 cockerels itching for a fight.

Why is Chuanshan Park So Special?

The Lijiang River has many beautiful scenery, such as the idyllic Chuanshan Park on its east bank, through which the clear Jiang Xiaodong River passes. Chuanshan Park is famous for Douji Mountain, which consists of Chuanshan Mountain and Pheasant Mountain. The two mountains together are like two roosters eager to fight. Other attractions worth visiting include Baota shan on the west bank of the Jiang Xiaodong River, Ship Cave, a large karst cave and Moon Cave.

Where is Chuanshan Park

Located in the southern suburb of Guilin city, with mountains as its axis, covering an area of about 2 square kilometers, it is one of the parks with charming landscapes in Guilin city. Through the mountain across the Lijiang River and Xiangbi Mountain

Douji Mountain (Jidu Mountain) in Chuanshan Park is one of the highlights of the park. It consists of Chuanshan Mountain and Pheasant Mountain and is located on both sides of Lijiang River. The former consists of five connected peaks, forming a cock’s head, wings, tail and back. The latter fluttered their wings in preparation for the battle. It seems that if the river did not separate the two challengers, they would have been fighting to death.

It is said that long ago, a group of intellectuals went to Guilin to take the imperial examination. When passing Douji Mountain, one of them wrote “Jidu Shangshan Jidu” (two cocks fighting on Douji Mountain) as the first line of the couplet. The rest racked their brains to come up with a second sentence to respond to the first sentence, but no one succeeded. A few years later, two of them returned to Guilin. When they passed a place called “Tibetan Dragon Cave” (Long Yinyan), the name inspired one of them to come up with the second sentence-“Long Yin Zhong Yan Yan Yinlong” (a dragon hidden in Tibetan Dragon Cave). The long-awaited problem was subsequently solved.

This is one of the “cockfights”. Moon Cave on the western slope is a rooster’s eye, crossing the hill like a tunnel. The cock’s body has five peaks, and it is also like a pen holder. Therefore, this mountain is also nicknamed Bijia Mountain.

This is a cave in Chuanshan Park. There are many peculiar stalactites on the hillside. Using lights skillfully, the natural cave was decorated as a fairy palace. The cave is 1531 meters (5023 feet) long and has 25 points. These stalactites have different shapes, such as petals, fluff, flower buds and pine needles. This cave has set a Guinness World Record. It is “a stalactite pillar connected with the most cave shields”.

Moon Cave is also called the Crystal Cave because it has shining stalactites hanging on the roof. As the name implies, this sacred cave is like a bright moon in the sky at night. Together with the hidden moon cave in elephant trunk mountain, they form a unique landscape of “double moon of Li river”, one in the sky and the other on the water.

Baota shan in Chuanshan Park belongs to the same mountain range as Chuanshan one million years ago. The movement of the earth’s crust divided them into two hills on the other side of the Jiang Xiaodong River.

Baota shan is named after its hexagonal longevity pagoda. Built in the Ming Dynasty (1368-1644), the seven-story brick tower has a 13.3-meter (44-foot) high multi-eaved pagoda. On the north wall of the tower is carved a long-lived Buddha (amidala Buddha).

Baota shan is also called Warship Mountain because of its similar shape. Many maple trees are planted at the foot of the mountain. The flaming maple leaves bring tourists another amazing scenery in late autumn.