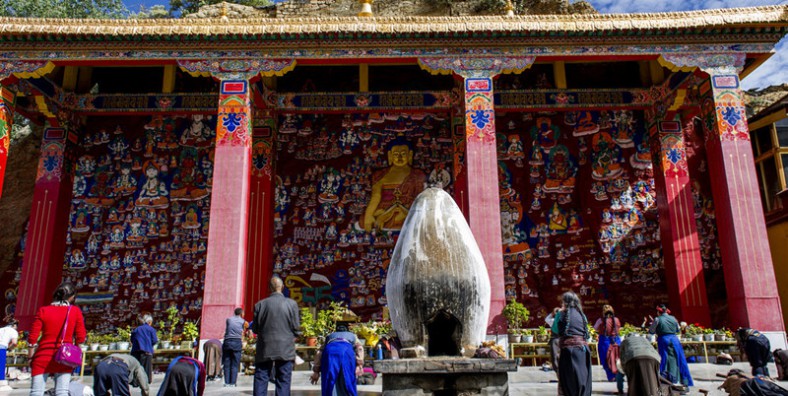 Chakpori Hill is a sacred hill in the city of Lhasa in Tibet. It south of the Potala(布达拉宫) and just to the left when one is facing the Potala. It is considered to be one of the four  holy mountains of central Tibet. Tradition has it that the three main hills of Lhasa represent the “Three Protectors of Tibet.” Chagpori is the soul-mountain (bla-ri) of Vajrapani, Pongwari that of Manjushri, and Marpori, the hill on which the Potala stands, represents Chenresig or Avalokiteshvara.

History and Development of Chakpori Hill

Chagpori was the site of the monastic medical college of the same name founded there by Sangye Gyatso in 1696. This medical college, which incorporated a recently restored temple made by Thang Tong Gyalpo, was supplied with revenue generating lands and with a constant stream of students by a “monk tax”. It remained an important medical institution in Tibet and Central Asia up until the mid-Twentieth century. During the March 1959 Lhasa uprising, the medical school established by the Thirteenth Dalai Lama named MentseKhang and a temple housing statutes of coral (Tsepame), mother-of-pearl (of Tujechempo) and turquoise (of Drolma) were demolished by PLA artillery as the Tibetans had placed a few cannons up there. The monk Jampa Phuntsok of the Namgyal Monastery recalled, “when the bombardment of Chakpori Hill began … the Tibetans at the Potala could only watch as their beloved landmark went up in smoke.”It is now crowned by radio antennas. A road has been constructed through the spur that used to connect Chagpori with the Marpori (‘Red Hill’) on which the Potala is built. Some rebuilding has since taken place a number of old rock carvings have survived through damage. Some of them are thought to have been carved during the reign of king Songtsen Gampo (605 or 617? – 649 AD) and painted by Nepalese artists. Some buildings have been rebuilt near the base of the hill and there is now again a small temple with prayer wheels.

You can enjoy and take photos of Potala, here is the best view for you, you can also understand theVajrapani culture.

Attraction Transportation\
You can fly to Lhasa Kongga International Airport(拉萨贡嘎国际机场）or take the train and then take the bus to Lhasa. The whole journey is about 60 km.