In China, train is an important mode of long-distance travel. According to the “Railway Construction and Development Plan” issued by the National Development and Reform Commission, the total mileage of Chinese railways is expected to reach 150,000 kilometers by 2020, of which 120,000 kilometers belong to China normal railways. China normal railways refers to the railways designed with low speed, which can only allow the train to run at normal speed. At the beginning of the railway construction, there was no idea of normal speed railway. It was not until the high-speed railway era that the concept of normal railway was introduced.

Before the 21st century, except for Guangzhou-Shenzhen railway, China’s railways were all normal speed railways. The main reason was that due to the backward economic and technological strength at that time, there was not enough advanced bridge and tunnel construction technology and locomotive manufacturing technology.

In the early days of New China, the key railway construction was in the central and western regions. After the reform and opening up, the pace of railway construction in the eastern region was gradually accelerated. Several vertical and horizontal railway trunk lines were formed and the extension of local railway branch lines was expanded. Apart from the Bohai Sea Railway, Beijing-Shanghai railway, Beijing-Guangzhou Railway and the North China section of Beijing-Kowloon Railway, most of the railways are built zigzag in continuous mountains and hills. The mountainous section of the railway accounts for a large proportion. The initial design speed of most trunk railways is 120 km/h. In many mountainous and hilly sections, the train speed limit is less than 100 km/h.

From 1997 to 2007, China railways carried out a total of six large-scale speed-up. Although EMUs with a speed of 200 kilometers per hour were operated in several economically developed city circles and several trunk lines in the later period, the main railways speeded-up during this period was still the normal speed railway.

The speed-up of normal speed railways mainly include the reinforcement and reconstruction of existing railway lines, electrification and double-track reconstruction so as to safely operate high-speed locomotives. Fast  speed train, express train and direct express train have appeared one after another, and many branch of noamal speed railways have been completed and opened to traffic.

At this period, the operating speed of trains on China normal rail line has improved significantly, with the fastest speed reaching 160km/h to 200 km/h. The express train from Guangzhou to Beijing takes only 21 hours. On July 1, 2006, the main line of the Qinghai-Tibet Railway was completed and opened to traffic. The design speed of the main section reached more than 100km/h, marking that the construction technology of China’s railway is the highest in the world. After the sixth large-scale speed-up of China’s railway in 2007, fast trains gradually replaced normal trains and became the leading role of passenger trains.

The existing normal speed railway will further replace the old green trains, and more fast trains, express trains and direct trains will be added to the national trunk lines and local branch lines.

China Train Tours with us

At present, if you want to travel to Tibet by train, you can only take the normal train from Beijing, Chengdu, Xian or Lanzhou. Another hot destination, Zhangjiajie, can only be linked by normal trains too. Though high speed trains are becoming more and more important and popular in China, normal trains are still playing a vital role in passenger rail transport. Below are the pre-arranged popular China tour tours for you ,and you can also contact us to tailor-make your personal China train tours! 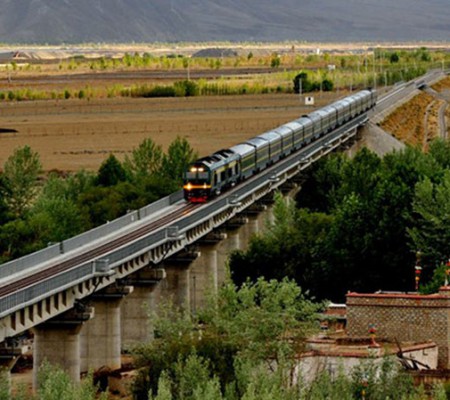