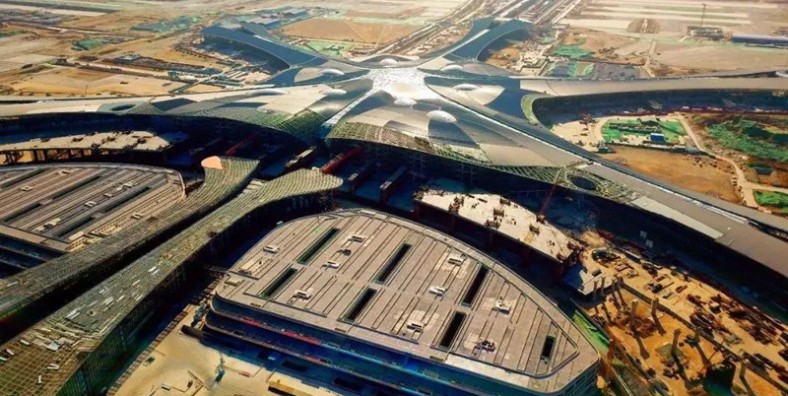 Beijing Daxing International Airport (Chinese: 北京大兴国际机场; pinyin: Běijīng Dàxīng Guójì Jīchǎng) (IATA: PKX; ICAO: ZBAD), located on the border of Beijing and Langfang, Hebei Province, is Beijing’s second international airport and is currently under construction. The name of the airport was announced on September 14, 2018. The terminal building, the second-largest single-building airport terminal after Istanbul Airport, with an area of more than 1,000,000 m2 (11,000,000 sq ft), is completed on June 30, 2019, and the airport is expected to be open on September 30, 2019. Upon completion, it will serve as a major international hub airport in Northern China. There will be 4 runways, and 79 contact aircraft stands. The new airport is expecting a total of 7 runways and another terminal to the south of the current one in the future, in order to accommodate 880,000 flights and 100 million passengers each year.

Upon the opening of the new airport, Beijing Nanyuan Airport (currently solely served by China United Airlines) will be closed.

The airport’s master plan was designed by airport consulting firm CACC(China Airport Construction Corporation of Caac) and will feature a ground transportation centre providing the airport with public transportation links to high-speed rail, metro, expressways, Beijing Airport Bus routes, local buses and inter-airport transportation system.[21] The terminal building was designed by British architects Zaha Hadid Architects and French planners ADPI, and executed by the Beijing Institute of Architectural Design (BIAD). It consists of a central hub with six curved spokes.[22] Hong Kong design studio Lead 8 was appointed as lead designer of the integrated service building(the 6th pier) in 2018. The terminal, according to Lead 8, will encompass “a purposeful design of work spaces, with integrated retail, dining, and entertainment options for the large number of passengers expected,” with plans to incorporate interactive pet hotels, a child care and nursery, hybrid online retail and dining, and a showroom for companies.

Another intercity railway, the Intercity Railway Connector, will connect Langfang, Yizhuang, Beijing Sub-administrative Center in Tongzhou District and Beijing Capital International Airport to the new airport. Phase I of the intercity railway connector (New Airport to Langfang East railway station) is under construction. Phase 1 of the railway will be finished in December 2022. The speed will be 200 km/h.

The New Airport line of the Beijing Subway is currently under construction. It will connect the airport to the urban area of Beijing and begin operation at the same time as the airport.

A second airport for Beijing was proposed in 2008. By 2012, the existing Beijing Capital International Airport was running at near its full design capacity.

Early media reports during September 2011 suggested that there could be up to 9 runways: 8 runways for civil aviation plus one runway dedicated to military usage. It would replace Beijing Capital International Airport (which had 83 million passengers in 2013, second most in the world) as the main airport of Beijing and the largest in China and was being planned as a domestic-only airport. The airport was planned to be able to handle 120 to 200 million passengers a year, which, if capacity were fully used, would make it the world’s busiest airport by passenger traffic, surpassing Hartsfield–Jackson Atlanta International Airport by far.

Official approval for construction by National Development and Reform Commission on 22 Dec. 2014. It called for an airport to be constructed in the southern part of Daxing District of Beijing, along the border of Beijing and Hebei Province. No design or plans were released due to ongoing negotiations. It was stated that it would consist of 7 runways, 6 for civilian use and 1 for military purposes. Construction is expected to be completed in September 2019[41] with a capacity of handling 75 million passengers by 2025. The estimated cost of construction is at least 70 billion RMB (US$11.2 billion), including the 37 km (23 mi) Beijing–Xiong’an intercity railway(Beijing section), to Beijing West railway station.

Construction of the airport began on December 26, 2014.

By March 2017, the terminal had its concrete structure capped.

On January 23, 2019, the first flight inspection began to be carried out and is expected to be completed in March.

It was initially planned for airlines of the SkyTeam alliance to be relocated to the new airport, while Star Alliance airlines would remain at Capital, effectively making both airports hubs.This was confirmed in 2016, when the Civil Aviation Administration of China announced that China Southern Airlines, China Eastern Airlines and Xiamen Airlines along with other SkyTeam airlines would move to the new airport, while Air China and other Star Alliance carriers would remain at Capital. China Southern, China Eastern and Beijing Capital Airlines’ intentions to move to Daxing were confirmed by a Xinhua report in December 2017.

CAAC required each Mainlaind Chinese airline (other than China Postal Airlines) to serve only one Beijing-area airport following the opening of Daxing, but allowed foreign airlines (including Hong Kong, Macau and Taiwan-based airlines) to operate from both airports if they wished to do so.[48] China Eastern Group and China Southern Group were each allocated 40% of landing slots with the remaining 20% for smaller Mainland China and international airlines. However, on 1 May 2019, this plan was changed by CAAC, with China Eastern Group relinqueshing 10% of its allocated slots (to give it 30% of slots) to Air China Group in exchange for the China Eastern group continuing to operate its Shanghai-Beijing flights at Beijing Capital Airport.

Among Oneworld carriers, American Airlines has indicated plans to relocate flights from Capital to Daxing due to its tie-up with China Southern, but Cathay Pacificand Cathay Dragon reportedly intend to stay at Capital. The alliance announced in February 2019, that its member airlines were considering a formal co-location scheme at Daxing.. Finnair announced in June 2019 that it will start serving Daxing three times per week from 3 November 2019  in addition to its daily flight to Capital.