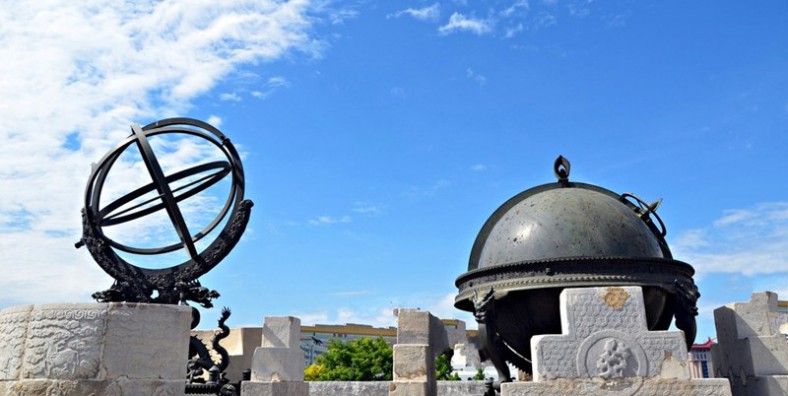 Why is Ancient Observatory so Special?

It is one of the oldest existing observatories in the world and is also the royal observatory of Ming and Qing dynasties in China. It is famous for its complete architecture, complete equipment and long history. It is the oldest of the existing ancient observatory to maintain continuous observation. It is also an important place for cultural exchanges between China and foreign countries and enjoys a high reputation at home and abroad.

As early as 1279 A.D. (the 16th year of Yuan Dynasty), astronomers Wang Xun and Guo Shoujing established a Sitiantai, which became the earliest source of Beijing’s ancient observatory.
After the establishment of the Ming dynasty, the observatory was built on the site of the southeast corner of the city wall in 1442.

After the founding of new China, Beijing ancient observatory was listed as a national key cultural relic protection unit in 1982 and reopened to the public in 1983.

This part mainly introduces the formation and development process of the Chinese time calendar and the main research results. The calendar in ancient China is quite special. Most of them are yin and yang combined calendars. From the ancient six calendars to the Qing constitutional calendar, there are 102 kinds.

This part of Beijing ancient observatory’s ancient Chinese astronomy achievement exhibition mainly introduces some major historical events and observation achievements of ancient Chinese astronomy. For example, the research and exhibition on sunspots, Halley’s Comet, supernovae, etc. has been on display for many years and has been well received by domestic and foreign audiences.

The ecliptic armillary sphere weighs 2,752 kilograms and is 3.492 meters high. It is China’s first observation apparatus for an independent frame zodiac coordinate system.

Displayed at the southern end of the Beijing Ancient Observatory, the horizon circle weighs 1,811 kilograms and is 3.2 meters high.

The equatorial armillary sphere weighs 2,720 kilograms and is 3.380 meters high. It was often used as an astronomical observation instrument in ancient China, and has more than fourteen usages, mainly to measure right ascensions and declinations of stars.

The Ancient Observatory enjoys a high reputation in the world, so it gains much popularity among oversea visitors. Many superior officials and illustrious scholars have left their footprints there, such as former British Prime Minister Tony Blair and former Belgian prime minster Guy Verhofstadt.