This tour fulfills your dream to visit the most beautiful cites in China – Suzhou, Hangzhou and Shanghai. The classical Chinese gardens and the beautiful lakes will not fail to impress you. In 6 days, you will also visit the ancient capital city Nanjing. 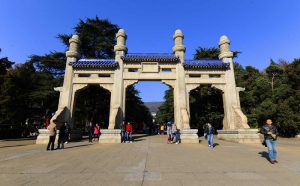 Arriving at Nanjing railway stations or Nanjing Lukou Airport in the morning, you are met by our tour guide and transferred to your hotel in Nanjing. After lunch, start your Nanjing tour with the visit to Ming Xiaoling Tomb. The only world cultural heritage site in Nanjing, Ming Xiaoling Tomb is the burial site of the Hongwu Emperor (Zhu Yuanzhang), the first emperor and founder of Ming Dyansty (1368-1644) of China. The tomb construction took 24 yeas from 1381 to ended in 1405. The mausoleum is mainly composed of the Sacred Way and the Mausoleum Complex.

Move on to Sun Yat-sen Mausoleum. Dr. Sun Yat-sen is considered to be the “Father of Modern China” who fought against the imperial Qing government and ended the monarchy and established the Republic of China after the 1911 revolution.

Continue to visit Linggu Temple. Linggu Temple Scenic Area is named after the namesake temple–Linggu Temple. Now the scenic area is mainly composed of Linggu Temple, Linggu Pagoda, the Beamless Hall, the Entrance Gate, the Paifang and a large screen wall. From 1928 to 1935 during the Kuomintang Government, the Linggu Temple was gradually built into a cemetery dedicated to the the National Revolutionary Army’s martyes.

Return to your hotel in Nanjing and free for rest of the day. 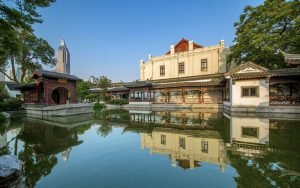 After breakfast at your hotel, first visit Nanjing Massacre Museum. The Memorial Hall of the Victims in Nanjing Massacre by Japanese Invaders tells the overwhelming atrocities of raping, killing, burning and looting committed by the Japanese forces of aggression during the six weeks from December 13 to January, 1938.

Head to Zhonghua Gate. The Zhonghua Gate was one of the massive and defensive complex on the city wall of Nanjing. It was the southern gate of the ancient Nanjing city wall. It is recognized as the largest ancient city wall gate in the world. 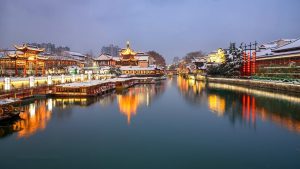 Move on to Taiping Heavenly Kingdom History Museum. The museum is housed in a garden complex built in Ming Dynasty style where once the Taiping Kingdom officials lived. The museum tells the history of Taiping army from starting Guangdong by using maps, some exhibits on display like Hong Xiuquan’s seals, coins, weaponcs and texts and laws.

Finally visit the Fuzi Temple ( Confucius Temple ). The Confucius Fuzi Temple has the history of over 1500 years. It has been damaged and rebuilt for many times. Today, the temple you see is the restored Qing Dynasty style buildings in traditional style. In addition, the area around the Confucius Temple has become a busy and lively commercial area packed with tourists thronging here for shopping, eating and mearry-making.

At the end of the tour, you are transferred to Nanjing South Railway Station around 6:00pm for Suzhou. Arrival at Suzhou, met and transferred to your hotel in Suzhou. Free for rest of the day. 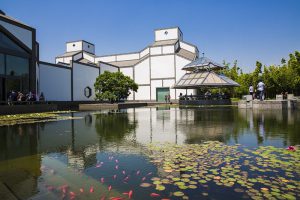 Pick-up from your hotel in Suzhou around 8:30am and start your Suzhou private day tour. First visit Suzhou Museum (Monday closed). Suzhou Museum is a museum of ancient Chinese art, paintings, calligraphies, and handmade crafts. Then move on to the Humble Administrator’s Garden. The Humble Administrator’s Garden is one of the four most famous private gardens in Suzhou, crowned as the World Cultural Heritage Site along with other classical gardens of Suzhou.

Then walk along Pingjiang Road. This 800-year old street is the best preserved ancient “water lane” ( in contrast with “water town”) in Suzhou. The 1600-meter cobblestone path runs alongside with a canal with willows dipping their branches in the water, cute little bridges that cross and all flanked by old white-washed local houses. 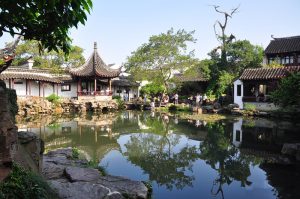 After Chinese lunch, continue to visit Net Master Garden, the best and most celebrated as a model Ming Dynasty Garden in all of Suzhou. The Garden of the Master of the Nets is really a masterpiece. The good use of space is the most effective thing about this garden. Rock arrangements and beautiful fish pools match each other as do the house and garden parts. The garden also holds many structures of using lattice windows to frame views of flowers or bamboo.

Head to the Ancient City Gate and Grand Canal. The Panmen City Gate is the oldest city gate in existence in Suzhou city. It used to be one of the eight city gates during the Spring & Autumn Annals (770-476 BC) when Suzhou was the capital of the Wu Kindom. The Gand Canal is one of the greatest ancient projects in China and is the longest man-made canal in world. 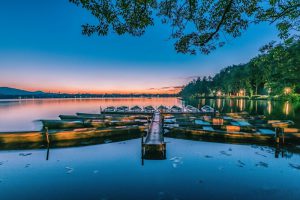 Pick up from your hotel in Hangzhou and head to a wharf at West Lake. for one hour boat cruise. There are many lakes named “West Lake” in China, but the “West Lake” here in Hangzhou is usually considered the most beautiful among all. It is surrounded by hills on its three sides, with an area of about 6.5 square kilometers.

Finish your cruise at the Huagang Park Wharf. Move on to Huagang Park ( Fish Viewing at the Flower Pond Park ). The Huagang Park was a private garden of an official in the Southern Song Dynasty about 800 years ago. Now it has been greatly renovated and turned into large park of over 20 hectares.

Continue to visit Leifeng Pagoda. Ascending to the top of the pagoda and looking down, one has a panoramic view of West Lake and the whole city of Hangzhou. Leifeng Pagoda is the most vibible landmark on West Lake. It is a five story tall tower with eight sides, located on Sunset Hill south of the West Lake.

After local Chinese lunch, you are taken to Longjing Tea Plantation to experience the traditional method of making Longjing (Dragon Well) Tea as well drinking, picking, smelling or buying. Hangzhou is famous for its Longjing Tea, one of the best green teas in China.

Then continue to vist Lingyin Temple. Lingyin Temple is a Buddhist temple of the Chan sect nestled in the Flying Peak north-west of Hangzhou. It is one of the largest Buddhist temples in China. The Flying Peak features a large number of grottos and religious rock carvings. After the whole day tour, you will be transferred Hangzhou Railway Statio around 6:00pm for Shanghai. Arriving at Shanghai, you are met and transferred to your hotel in Shanghai. Free for rest of the day. 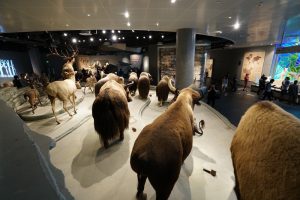 Pick up from your hotel in Shanghai. First come to People’s Square in the city center, covering 140,000 square meters, surrounded by the municipal government office building, the Shanghai Museum, Shanghai City Planning Exhibition Hall and the Grand Theatre. There are a huge green area and trees, encircled by various kinds of buildings on all sides. All of these buildings make up a beautiful view.

Then walk to the Nanjing Pedestrian Road. It is regarded as the first commercial street in Shanghai. It was first built in 1851. Now Nanjing Road has turned into the number one site for shopping in the city.

Wander from the eastern end of Nanjing Road to the Bund. The Bund (Waitan) is one of the most noted architectural symbols of Shanghai. The Bund in Shanghai was first used when the first British company opened a office there in 1846. The Bund, or the waterfront,is now surrounded by about 50 various buildings of different architectural styles including Gothic, Baroque, Romanesque, Classicism and the Renaissance. 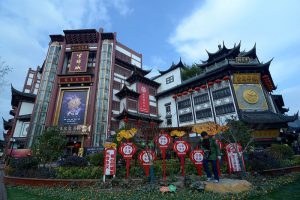 Move on to Shanghai Bazaar and Yuyuan Garden. Yuyuan is the most famous garden in Shanghai. It is located in the heart of Shanghai’s Old City (Shanghai bazaar), one of the few existant old tourist places in Shanghai. Shanghai bazaar is teemed with a great number of small streets and lanes where vendors sell their products and food stuffs to the tourists and local people.

After lunch, continue to visit the new development zone in Pudong – Lujiazui, which is teemed with the futuristic, avant-garde buildings – Oriental Pearl Tower, Jin Mao Building, Bank of China Tower. Taking the elevator to the 88-storey Observation Deck of Jinmao Tower to have a bird’s eye view of Huangpu River.

After descending Jinmao Tower, drive back to your hotel.

Today you are free to explore the city of Shanghai on your own. Then transferred to airport for departure or free on your own.