This in-depth Silk Road Tour in Gansu is one of the classic masterpieces of Third Pole Tour. Our fine designed itinerary will include the highlight cities on the old Silk Road, such as Dunhuang, Jiayuguan, Zhangye, Wuwei, Linxia, Lanzhou.

During the tour, you could visit the Mogao Grottoes and the Crescent Lake in Dunhuang, the Great Wall in Jiayuguan, the colorful Danxia Land Form and Mati Temple in Zhangye, the Han Leitai Momb in Wuwei, the ethnic villages in Linxia, and the Labrang Monastery in Xiahe, and more.

Upon your arrival at the Dunhuang Airport/ Train Station, our tour guide will meet you and escort you to your hotel in Dunhuang downtown. The rest of today is free for you to explore Dunhuang city. 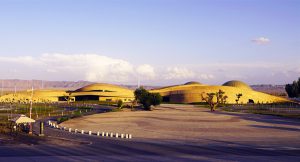 Today, we drive to visit the Mogao Grottoes, which is the world’s most important site of ancient Buddhist Culture. It is outstanding for its exquisite mural paintings and statues. 735 sandstone caves holds 2,415 colorful statues and 45,000 square meters mural paintings. Then move on to visit the Echoing Sand Mountains, where it is said that the sand mountains echo like Orchestra music in the sunny days, even is there is no wind. If you slide down from the mountains, you can hear the echoing sound more clearly.

After that, continue to visit the Crescent Lake which is surrounded by sand mountains from different directions. It is a crescent-shaped lake in an oasis, with some well decorated traditional Chinese architecture, trees, flowers and a lake that has never dried up. 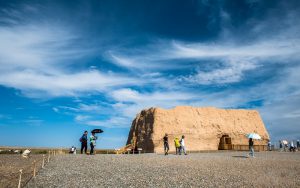 After breakfast, drive to visit the Yadan National Geological Park, which has been created over time by the sort part of the earth surface and then has been eroded by wind and rain with the hard part of the rocks remaining in the desert. Then you will visit the Yumenguan which was the most important pass on the western of the Hexi Corridor region, where you will witness the management system of the traffic and the beacons, the defensive system of the Great Wall, and the long-distance traffic and communication on the Silk Road.

On the back way, you will visit the Western Thousand-Buddha Cave, which is set into a cliff on the bank of the Dang River, 35km from Dunhuang downtown. Because the frescos in this cave are similar in structure and artistic style to those found in Mogao Caves, the Western Thousand-Buddha Cave is considered Dunhuang Buddhist art. Then be transferred back to your hotel in Dunhuang.

Today after breakfast, we will drive about 374km from Dunhuang to Jiayuguan. On the way, visit the Yulin Grottoes in Guazhou county. In the forty-two caves are preserved more than 100 polychrome statues and over 5,000 square meters of wall paintings, dating from Tang Dynasty to Yuan Dynasty. It is considered as the sister of Mogao Grottoes. Then continue drive to Jiayuguan city and check in your hotel. 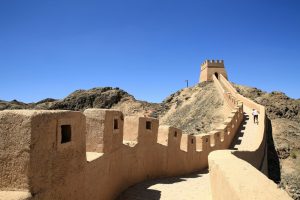 After breakfast in your hotel, our tour guide will pick you up, and then escort you to visit the Jiayuguan Pass. Wander along the ancient city wall and feel the heartbeats of this “first pass under heaven”. Then move on to the Hanging Great Wall, which is an important part of the defensive work of Jiayuguan Pass. Viewed from a distance, the Great Wall appears very like a dragon overhanging the slope, hence the name. Then be transferred back to your hotel. 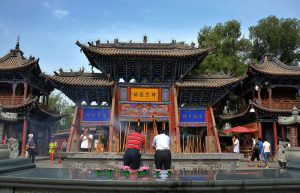 Today drive about 225km from Jiayuguan to Zhangye. First stop at the downtown to visit the Giant Buddha Temple where there is a large reclining Buddha so people also call it as the Reclining Buddha Temple. After lunch, drive about 58km to visit the Mati Temple (Horse’s Hoof Temple) in Sunan Yugu Tibetan region. This is a famous scenic spot integrating grotto art, mountain views and folk customs of the Yugu minority group. The temple got its name because legend has it that a Chinese Pegasus landed here, leaving a huge horseshoe imprint that can still be seen within the Mati Hall.

Then transfer to visit the Zhangye Danxia Landform Geological Park, which remains seemingly untouched by and pollution in the Gansu Province. The Landform is known for its saturated color patterns. The unusual colors of the rocks are caused by red sandstone and mineral deposits laid down over the course of 24 million years. The formations carved into the park, such as valleys, pillars and waterfalls, were shaped over millions of years by rains and winds. Be transferred back to your hotel in Zhangye.

Today drive about 230km from Zhangye to Wuwei. First stop at the downtown to visit the Haizang Temple which was built over 1,700 years ago, and it became a temple of Tibetan Buddhism. Then move to visit the Leitai Momb of Han Dynasty where you will see the real bronze galloping horse, as the symbolization of Chinese tourism. It is an large ancient brick tomb of the late Eastern Han Dynasty. There you can learn about the buried custom in that time. Be transferred back to your hotel in Wuwei. 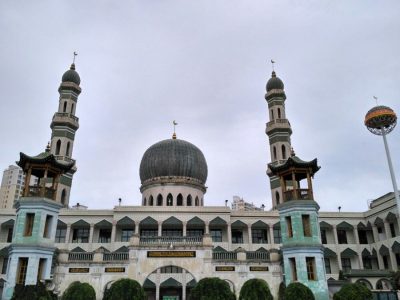 Today drive about 230km from Wuwei to Linxia Hui Autonomous Prefecture where is known as “Small Mecca of China”. Pay a visit to Linxia Mosque, and experience the blend of Chinese Muslim culture and Tibetan Buddhism cultures. Then drive to Jishi Ethnic Village, where Baoan, Dongxiang and Sala ethnic minorities are living. Move on to Dahejia if the road permits. Dahejia is the place where the Bonans mainly concentrated. This area is thickly wooded and enjoys a moderate temperature supported by plenty of water and lush grass, which make it suitable for farming and stockbreeding. 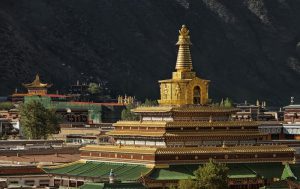 Today drive about 100km from Linxia to Xiahe. You will visit the Labrang Monastery, one of the “six great monasteries of the Geluk sect of Tibetan Buddhism”. The monastery is the most important Buddhism monastery outside the Tibetan Autonomous Region. Here, you will see the monks studying and debating about Buddhism. After that, drive back to your hotel in Linxia. 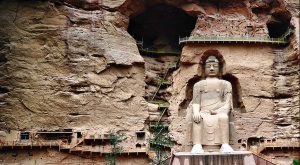 After breakfast in your hotel, drive 110km to visit the Binglingsi Grottoes, about 132km away from Lanzhou. You have to take the yacht to the bottom of the grottoes. Binglingsi Grottoes is a series of grottoes filled with Buddhist sculpture carved into natural caves and caverns in a canyon along the Yellow River. The sculptures, carvings, and frescoes that remain are outstanding examples of Buddhist artworks and draw visitors from around the world. The site is well preserved, including 183 caves, 694 Buddha stone statues, 82 earth buddha statues, and more than 900 square meters mural paintings.

After visiting, drive to Lanzhou hotel or airport / train station for your next destination.