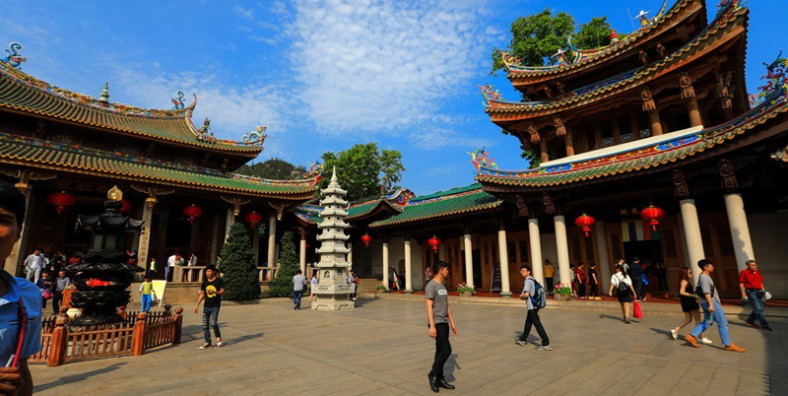 South Putuo or Nanputuo is a famous Buddhist temple founded in the Tang dynasty in the Chinese city of Xiamen. It is so named because it is south of the Buddhist holy site Mount Putuo in Zhejiang Province.

Best Seasons: All year round.

Why is Xiamen South Putuo Temple So Special?

Situated at the foot of Wulaofeng (Mountain of Five Old Men) and facing the sea, South Putuo Temple is deemed to be one of the must-go tourist places in Xiamen, Fujian Province. Even if you are not interested in Buddhism, you will find the place a scenic area providing you with a refreshing experience.

This Buddhist temple was once called Puzhao Temple (Universal Grace Temple). It was first built during the Tang Dynasty (618-907) and was later destroyed in the warfare during the Ming Dynasty (1368-1644). During the reign of Qing Emperor Kangxi (1662-1722), a naval general ordered it to be rebuilt into a Buddhist Temple and named it Nanputuo Temple.

The Temple was first built in Tang Dynasty (618 ~ 907), and it was called Sizhou Temple at that time. Sizhou Temple was abolished in Yuan Dynasty (1271 ~1368) and rebuilt in Ming Dynasty (1368 ~ 1644) at the present site, and it was renamed as Puzhao Temple. The temple is mainly worshiping Kwan-yin (the goddess of mercy), just like the Kwan-yin sanctum in Putuo Mountain in Zhejiang Province; besides, it is located at the south of Putuo Mountain, thus, the temple now is called as South Putuo Temple.

South Putuo Temple is a prosperous temple, and many tourists come here to pray for health and wealth. Besides that, tourists can also taste the delicious vegetarian food in the temple, and if you more time, climbing the Wulao Peak behind the temple is a great experience.

Hall of the Celestial Kings (天王殿): It is also named Hall of the Maitreya, the Maitreya Buddha graciously smiling to everyone, falling his ears and shoulders down and exposing his navel and belly out, as he is welcoming every visitors of the temple.

The Great Buddha’s Hall (大雄宝殿): The three main Buddha being worshiped inside represents the past, today and the future; the Sakyamuni (the founder of Buddhism) in the middle, the Bhaishajyaguru (the Medicine Buddha) in the east and the Amitabha in the west.

There are two Mahakasyapas beside the Sakyamuni, they are Kassapa Thera (the Big disciple of Sakyamuni) and Ananda (the younger male cousin of Sakyamuni). The Thousands Hands Guanyin is in front of the Sakyamuni. There is an old legend for this: An old woman raised three daughters and one day she was ill and need the eyes of the live people to make the medicine, only the youngest daughter was willing to do that while her two older sisters did nothing. The story moved Sakyamuni, therefore he created a thousands hands Guanyin to memory the little girl’s courage and put the Guanyin in front of himself.

The Depository of Buddhist Texts (藏经阁): It is a two floors building for documents and Buddhist texts. The downstairs of the hall was once the place for teaching Buddhism, with 28 Burmese Jade Buddha inside.

Xiamen has a subtropical climate, which is generally temperate with abundant rainwater. It has an average annual temperature of approximately 21 centigrade. There is no intense heat in summer and no extreme cold in winter in Xiamen. The city has an average annual rainfall of about 1200mm (47 inches), mainly during the months from May to August. Wind power reaches Grade 3 to 4 in general, with northeast wind representing the dominant wind direction. Owing to the air currents resulting from the difference in temperature in the Pacific, Xiamen is hit by typhoon three or four times annually on average, which mainly occurs during the months from July to September. Xiamen is suitable for traveling all year round, and the best seasons are spring and autumn.

How to get to South Putuo Temple

If you want to get out of the traffic and hassle of navigation, you can book a private tour package that includes visiting, dining and transfer from us. Our local guide and driver will escort you to Xiamen South Putuo Temple in the fastest and most convenient way and take care of all the details. You just have to focus on the visiting.