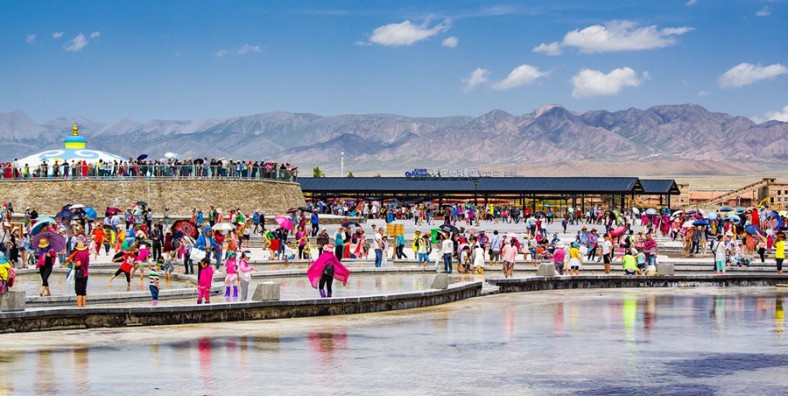 Qinghai Lake (Chinese: 青海湖), Koko Nor (Mongolian: Хөх нуур) or Tso Ngonpo (Tibetan: མཚོ་སྔོན་པོ།) is the largest lake in China. Located in Qinghai province on an endorheic basin, Qinghai Lake is classified as a saline and alkaline lake. Qinghai Lake has a surface area of 4,317 square kilometres (1,667 sq mi); an average depth of 21 metres (69 ft), and a maximum depth of 25.5 m (84 ft) as measured in 2008.[2] The current Chinese name “Qinghai,” the older Mongolian name “Kokonor”, and the Tibetan name translate to “Green Sea”, “Blue Lake” and “Teal Sea”, respectively. Qinghai Lake is located about 100 kilometres (62 mi) west of the provincial capital of Xining (Tib:Ziling ཟི་ལིང་།) at 3,205 m (10,515 ft) above sea level in a hollow of the Tibetan plateau.[3] Twenty-three rivers and streams empty into Qinghai Lake, most of them seasonal. Five permanent streams provide 80% of total influx.

The lake has fluctuated in size, shrinking over much of the 20th century, but has increased since 2004. There are five native fish species: The edible naked carp (Gymnocypris przewalskii, 湟鱼; huángyú),[5] which is the most abundant in the lake, and four stoneloaches (Triplophysa stolickai, T. dorsonotata, T. scleroptera and T. siluroides).[6] Other Yellow River fish species occurred in the lake, but they disappeared with the increasing salinity and basicity, beginning in the early Holocene, and eventually reaching the current salinity of c. 14 parts per thousand and pH of 9.3.[6] Qinghai Lake became isolated from the Yellow River about 150,000 years ago.

There is an island in the western part of the lake with a temple and a few hermitages called “Mahādeva, the Heart of the Lake” (mTsho snying Ma hā de wa) which historically was home to a Buddhist monastery.[7] No boat was used during summer, so monks and pilgrims travelled to and fro only when the lake froze over in winter. A nomad described the size of the island by saying that: “if in the morning a she-goat starts to browse the grass around it clockwise and its kid anti-clockwise, they will meet only in the night, which shows how big the island is.”[8] It is also known as the place where Gushri Khan and other Khoshut Mongols migrated to during the 1620s.[9]Qinghai Lake is sandwiched between Hainan and Haibei Tibetan Autonomous Prefectures in northeastern Qinghai. The lake is located at the crossroads of several bird migration routes across Asia. Many species use Qinghai as an intermediate stop during migration. As such, it is a focal point in global concerns regarding avian influenza (H5N1), as a major outbreak here could spread the virus across Europe and Asia, further increasing the chances of a pandemic. Minor outbreaks of H5N1 have already been identified at the lake. At the tip of the peninsula on the western side of the lake are the “Bird Islands” (Cormorant Island and Egg Island), which have been bird sanctuaries of the Qinghai Lake Natural Protection Zone since 1997. The lake often remains frozen for three months continuously in winter.[citation needed]

The lake is circumambulated by pilgrims, mainly Tibetan Buddhists, especially every Horse Year of the 12-year cycle. Przhevalsky estimated it would take about 8 days by horse or 15 walking to circumambulate the lake, but pilgrims report it takes about 18 days on horseback, and one took 23 days walking to complete the circuit.[10]