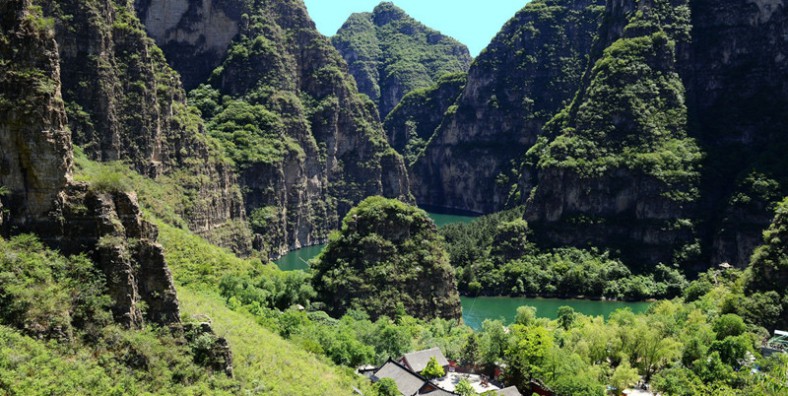 Longqing Gorge is a scenic area in the village of Gucheng. It is one of the most popular day trip getaways for people living in Beijing. It is well known for its scenic canyon landscape. The mountain and river vistas are reminiscent of other famous landscapes in China.

Why is Lingshan Mountain in Beijing so Special?

Longqing Gorge is a scenic area in the village of Gucheng. It is one of the most popular day trip getaways for people living in Beijing. It is well known for its scenic canyon landscape. The mountain and river vistas are reminiscent of other famous landscapes in China. It is variously given the names “Little Three Gorges” for resembling a “microcosm of the Yangtze River’s fabled Three Gorges” or “mini Li River” for its “narrow peaks and dramatic rock faces” recalling the Li River in Guilin.

Where is Lingshan Mountain in Beijing?

Longqing Gorge is located at the mouth of the Yanqing Old City River, in the northeast of Yanqing County. It is 53 miles (85 kilometers) from Beijing City.

The weather in winter is very cold, and the ice period is longer than in other places near Beijing. The Ice Lantern Festival has been held since 1987 to attract more tourists. Now, the ice lantern has become the traditional ice lantern exhibition area for winter tourism in Longqingxia. The natural water formed by the huge ice block under the reservoir and between the two mountains seeps out from the two mountains and becomes the best nature for the lantern exhibition Background.

During the festival there are around 150 ice sculptures are on display inside an ice pavilion. It is a smaller version of the Harbin International Ice and Snow Sculpture Festival. Starting in 2016, the ice festival has had an Olympics theme to promote the 2022 Winter Olympics in Beijing including a cluster of events hosted in Yanqing District.

At the top of the mountain at the peak of the Longqing Gorge area is the Jade Emperor Temple of Taoism, which can also be reached by cable car. Both temples are pine trees built in the Ming Dynasty in front of the temple of Shenxian for 30000 years.

Baihua Cave is 320 meters long, with an exhibition area of 3000 square meters. There are more than 1000 kinds of artificial flowers and many animals on display here. It is divided into different theme areas. You can go to Shenxian Temple by cable from Baihua Cave.

The prime attraction for tourists visiting the scenic area is a 15-minute open-top boat cruise along the bottom of the Longqing Gorge. A cable car takes visitors up to a mountain peak. The Jingang Temple (Diamond), built in 1065, and Immortal Taoist Template are tiny structures situated at the top of the mountains. Bungee jumping can be done from the top of one of the mountains.

There is a 258-meter (846 ft) yellow dragon-shaped escalator to bring visitors to the top of the Longqing Dam.