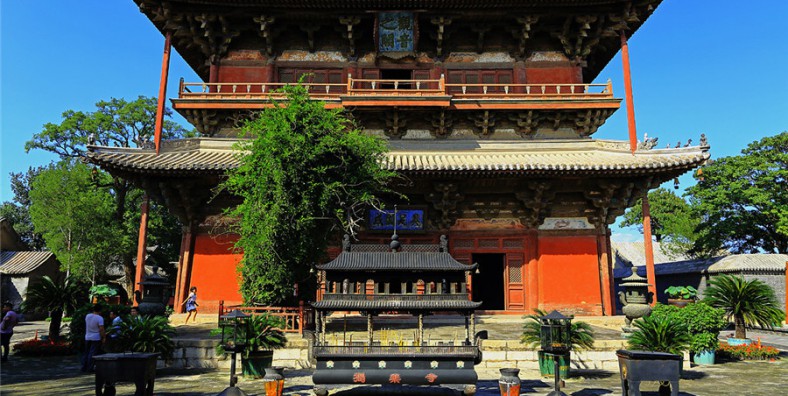 It is one of China's three remaining Liao temples and one of China's famous ancient buildings. Although Dule Temple is a famous temple for thousands of years, its history is extremely slim.

Why is Dule Temple So Special?

Dule Temple covers a total area of 16,000 square meters. The two oldest buildings in the temple, Shanmen and Guanyin Pavilion, were rebuilt in 984 AD after the Liao Dynasty. In the 19th year of the Republic of China (1930), Dule Temple was famous at home and abroad for being investigated and published by Japanese scholar Guan Yezhen and Chinese scholar Liang Sicheng.

Where is Dule Temple

Located at No.41 Wuding Street, Jizhou District, Tianjin City, it is one of China’s only three Liao temples and one of China’s famous ancient buildings.

Dule Temple or the Solitary Joy Temple is established in the early period of the Xuanzong reign in the Tang Dynasty (618-907). An Lushan, the prefecture military governor, gave oath there to rebel against the Tang Dynasty by launching the An Lushan – Shi Siming Rebellion.

In the Qing Dynasty, Dule Temple was once forbidden to civilians.

In 1961, Dule Temple was included in the first batch of national key cultural relics protection units by the State Council of the People’s Republic of China.

In 2003, the temple fair at Dule Temple was resumed and was listed as Tianjin’s intangible cultural heritage in 2009.

Dule temple consists of three parts: east, west and middle. the east and west parts have monk’s room and xianadu, and the middle part has temple gate and guanyin pavilion. According to historical records, the temple was rebuilt in the second year of Tonghe’s rule (984). Except for the temple gate and Guanyin pavilion built in Liao dynasty (916-1125), other buildings in the temple were built in Ming and Qing dynasties (1368-1911).

Through the temple gate, through the stairs to the north, there is a three-story pavilion, 5 bays wide, 4 bays deep and 23 meters high. This is the oldest existing pavilion building in China. On the base in the center of the exhibition hall stands a 16-meter-high Guanyin statue.

The Guanyin Pavilion is centered on the statue and is surrounded by two rows of pillars. The roof beam is fixed around the statue, and the top of the statue has an octagonal sunken panel. The four walls on the first floor of the exhibition hall are decorated with colorful murals. The themes include 16 standing arhats, a Buddha with three heads and six arms, a Ming king with four arms, scenery and folk customs. These are the masterpieces of famous painters of Yuan and Ming dynasties. Dule Temple was rebuilt and repainted during the Wanli period of the Ming Dynasty (1368-1644) and the Shunzhi, Ganlong and Guangxu periods of the Qing Dynasty (1644-1911).

Guhuan Temple is a representative work of ancient Chinese wooden structures. Its superb construction technology has enabled it to withstand many strong earthquakes, but it still stands there intact. After the founding of New China, Dule Temple has undergone several renovations and is now relatively well preserved, providing good materials for the study of ancient buildings.

The gate of Dule Temple is the earliest temple top gate in China. The gate is three wide and two deep, with a hall in the middle and cormorants on both ends of the ridge. Its shape is vivid and of primitive simplicity, and it is the original of Liao Dynasty.

On the sumeru seat in the center of Guanyin pavilion stands a 16-meter-high clay sculpture of Guanyin bodhisattva, which is one of the largest clay sculpture Buddha statues in China.
The four walls of the lower floor of Guanyin Pavilion are full of colorful paintings, which were painted by Ming Dynasty painters. They are well preserved, with clear pictures and bright colors.

The best time to pay a visit is in Spring and Autumn.

The main climatic characteristics are clear seasons, windy spring, drought and less rain. The summer is hot and the rain is concentrated. In autumn, the air is cool and the temperature is moderate. Winter is cold and dry with less snow. Therefore, Spring and Autumn are the best seasons to visit Tianjin.

2. Under the station of “Xikou of Ancient Street” on No.11 Road of Jixian Tourism Special Line, walk 100 meters south along Great Wall Avenue to Wuding Street and then walk 100 meters east to reach it.

There is only one train from Tianjin to Jixian. It is a classic retro green car with a train number of 6416 and a departure time of 7:22 in the morning from tianjin railway station. It takes 2 hours and 40 minutes by car and the ticket is 7.5 yuan.