They are further divided into 105 county-level divisions including 13 districts, 25 county-level cities, 62 counties, and 6 autonomous counties. The Xinjiang Production and Construction Corps administers ten county-level cities which do not belong to any prefecture. As well as 1,066 township-level administrative units including 1 county district, 349 towns, 481 townships, 42 ethic townships, and 193 blocks. To know more about Xinjiang Administration Division.

Accounting for over one sixth of China's total territory and a quarter of its boundary length, Xinjiang is the largest political subdivision of China. Xinjiang Uygur Autonomous Region is largely covered with dry grasslands and uninhabitable deserts, with dotted oases at the foot of Kunlun Mountains, Altay Mountains and Tian Shan Mountains. The inhabitable oasis there merely accounts for 9.7% of Xinjiang's total area by 2015.

Tian Shan mountain range splits Xinjiang into two large basins: the Dzungarian Basin in the north, and the Tarim Basin in the south. A small V-shaped wedge between these two major basins, which is limited by Tian Shan mountain range and the Tian Shan's main range in the south, is the basin of the Ili River that flows into Kazakhstan's Lake Balkhash; an even smaller wedge farther north is the Emin Valley. In addition to the two mountains, other major mountain ranges of Xinjiang cover the Pamir Mountains and Karakoram in the southwest, the Altai Mountains in the northeast (shared with Mongolia) and the Kunlun Mountains in the south (along the border with Tibet). Xinjiang's highest point is Mount Godwin-Austen (戈德里奥斯丁峰), with 8611 metres above sea level, in the Karakoram Mountains (喀喇昆仑山脉) on the border with Pakistan.

Tarim Basin is one of the major basins in Xinjiang, and most of it is dominated by the Taklamakan Desert. In the north of Tarim Basin, it is the Turpan Depression which is the lowest point in Xinjiang, and in the entire China, at 155 metres below sea level. Compared to the Tarim Basi, the Dzungarian Basin is slightly cooler, and receives somewhat more precipitation.

However, it also has a large Gurbantünggüt Desert (古尔班通古特沙漠) (also known as Dzoosotoyn Elisen) in the center. The Tianshan mountain range marks the Xinjiang-Kyrgyzstan border at the Torugart Pass (吐尔尕特口岸) which is about 3752 meters.

Generally, a desert or semiarid climate prevails in Xinjiang, and the entire region is marked by great seasonal differences in temperature and cold winters. In summers, the Turpan Depression usually records the hottest temperatures nationwide, with air temperatures easily exceeding 40 °C. however, in the far north as well as places at the highest mountain elevations, winter temperatures regularly drop below −20 °C. The Tian Shan starting at the elevation of about 3,500–3,700 m above sea level, continuous permafrost is typically found. To know more about Xinjiang Climate.

The Best Time to Go

The best travel time of northern Xinjiang is from July to September, because this period enjoys blue sky and green lakes, bright yellow birches and yellow pine torches, which cooperate together forming a natural oil painting between the heaven and the earth. Meanwhile, it is the season that local fruits are ripe. The best time to visit southern Xinjiang is from August to October, for this time enjoys charming scenery, lovely weather, fresh air and fragrance of fruits.

Xinjiang is blessed with distinctive tourist resources so that you could travel there to appreciate different scenery all over the year.

In spring (March - May), temperature rises quickly with much wind.
With the invasion of cold-air outbreak, it occurs to high wind, sand dust and increasing precipitation. It is good to visit southern Xinjiang which welcomes blooming peach and apricot flowers as well as prairies that just wake from winter.

Summer (June - August) sees ripe wheat, fragrant fruit, and good harvests of dairy products. The climbing in mountainous areas are cool so that they are good places for avoiding summer heat. Also, you could enjoy the sea of flowers on Ili prairie which is known as lush southern-type fields north of the Great Wall.

Autumn (September - November) welcomes cold-air outbreak again. Compared to spring, the season sees less dust weather and more sunny days. After summer, harvest and cool weather are main tone of autumn. No matter which places you visit in Xinjiang, you could feel thick joy of harvest. It is a good season to visit Xinjiang.

Winter (December - February) sees the weakest wind of the whole year but with foggy days. When the temperature is higher than 0 ℃ until next year, the Heaven Lake of Tian Shan and southern Xinjiang would carry out all kinds of tourism projects. During this season, temperature experiences sharp cooling so that only snow and ice tourist projects and winter adventure in Ili can be your choices for visiting, many other places are not suitable for traveling.

With 56 types of national tourism resources that accounting for 83% of the total types in China, you could visit and feel both national scenery as well as cultural sites. Southern Xinjiang mainly sees humanistic and cultural sites, and natural scenery mainly gather in northern Xinjiang. Turpan and Shanshang Desert belongs to the eastern Xinjiang.

Then, as a region that played a key role in the Silk Road, you could feel the Silk Road culture. Besides, there are many ethnic groups so that you could experience ethnic culture as well. Furthermore, Xinjiang produces fruit of high quality because of its pleasant climate for planting, it is a good place to eat all kinds of fresh fruits. In addition, bazaars in Xinjiang are must - see choices for tourists because you could buy and see the most distinctive local products and specialties.

Last but not least, food and dishes like mutton shashlik, Xinjiang Big Plate Chicken, nang, etc.are famous in China, so eating food and dishes with the most authentic flavor there is a recommended thing.

Because of its location as well as the vast territory so that the transportation there may not so convenient as other provinces in China. But the transportation conditions there could support the needs and development. Xinjiang has the most airports in China. And from the capital city Urumqi to places around can be supported by all sorts of vehicles. To know more about Xinjiang Transportation.

According to modern Xinjiang archaeological data, there are human activities about 6,000 to 7,000 years ago in Xinjiang Region. In the Neolithic Age, about 2,000 yo 3,000 years ago, human prints could be seen in southern and northern areas of Tianshan Mountan, like Sandaolin (三道岭) and Qijiaojing (七角井)ogre Hami city, Asitana (阿斯塔那) of Turpan city, Chaiwobao (柴窝堡) of Urumqi county,Ili, Bachu, etc. The shape of stoneware, carving techniques, pottery color and decorative pattern are similar to those from places like Gansu, Inner Mongolia and Ningxia.

In Western Han Dynasty, with the spread of economic and cultural exchange between the eastern and western, the social and economic development of the Western Region was greatly promoted. So the local products like flax, broad beans, pomegranate, garlic, grapes, etc.are introduced to the Central Plain. All sorts of fur products are brought in as well. Meanwhile, silk and silk fabrics are introduced to the Western Regions and later reached the west Europe.

Because of its far location away from the central part of China, Xinjiang witnessed a complex history with all kinds of invasion and disturbance so that unique Xinjiang Culture formed.

Xinjiang is an agricultural region since ancient time. It has large deposits of minerals and oil. Because of the exploration on abundant reserves of coal, crude oil, and natural gas of the regions, as well as the China Western Development policy introduced by the State Council to boost economic development in Western China, Xinjiang economy develops in a promising way. In addition, thanks to its unique and ample tourist resources, tourism contributes to the the region’s economy a lot. Also, as the development of the Belt and the Road, economy of Xinjiang sees more opportunities and platforms.

Xinjiang is known as the hometown of song and dance, melon and fruit, and jade. There are 56 types of national tourism resources, accounting for 83% of China tourism resources. Xinjiang enjoys more than 1,100 tourist attractions which makes it the place that has the most tourist destinations in China.
The world's second peak with 8600 meters above sea level, and the lowest depressions in China with more than 154 metres below sea level are located there. And there are 13 favorable tourist cities. Being blessed with unique and multiple tourist resources, Xinjiang tourism plays an important part in its economic development and the tourism there develops well.

Xinjiang cuisine has the characteristics of both halal food and China northwestern cuisine. It mainly uses melons, meat, fish and eggs. The vegetables are the same with other cuisine in aspects of seasoning. The main differences are on the using of meat and eggs. Xinjiang food gives priority to halal cuisine, eating much beef and mutton, with the cooking methods of roasting, rinsing, saucing, steaming, etc. The well-known dishes are roast whole lamb, Xinjiang Big Plate Chicken, baked nang stuffed with meat, mutton eaten with hands, etc. The flavors include sourness and spiciness. To know more about Xinjiang Dining and Xinjiang Food.

Bortala Library is one of the Best Tourist Attractions and Top Things to Do when you travel to Bortala, it introduces the main scenic spots, entrance tickets booking, The...

Karamay Library is one of the Best Tourist Attractions and Top Things to Do when you travel to Karamay, it introduces the main scenic spots, entrance tickets booking, The...

Chinese Academy of Sciences Xinjiang Ecology And Geography Institute is one of the Best Tourist Attractions and Top Things to Do when you travel to Urumqi, it introduces the... 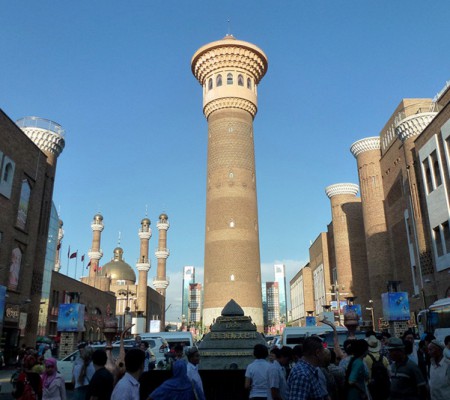 Early history According to J. P. Mallory and Victor H. Mair, the Chinese describe the existence of “white people with long hair” or the Bai people in the Shan...

玛纳斯  Manas – intangible heritage Inscribed in 2009 on the Representative List of the Intangible Cultural Heritage of Humanity The Kirgiz ethnic minority in China, concentrated in the Xinjiang region... 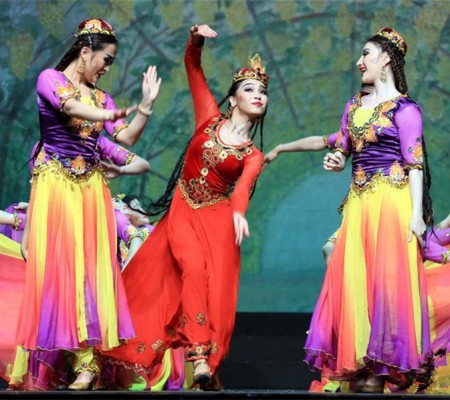 麦西热甫 Meshrep – intangible heritage Inscribed in 2010  on the List of Intangible Cultural Heritage in Need of Urgent Safeguarding Found among the Uygur people concentrated largely in China’s...