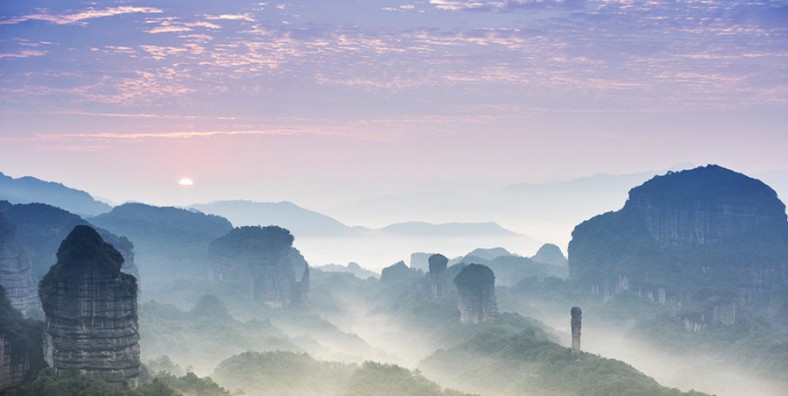 Mount Danxia (Chinese: 丹霞山; pinyin: Dānxiá Shān) is a noted scenic mountainous area in Renhua County, in the northern part of Guangdong province. It is described on the local signage as a “world famous UNESCO geopark of China”.

The material basis of the danxia landform formed by the danxia world geopark is the red fluvial lacustrine conglomerate formed in the late cretaceous period about 70 to 90 million years ago. Danxia Mountain used to be a huge inland basin in between 140 million and 70 million years ago. Affected by the Himalayan orogeny, the surrounding mountains are strongly uplifted, and the basin receives a large amount of debris deposits, forming a thick red stratum. Later, the basin had occurred many times intermittent rise, and as erosion of water, the Danxia Basin’s red bed were cut in to a group of Redstone Hills, which is the beautiful Danxia Mountain today.

The Danxia area is formed from a reddish sandstone which has been eroded over time into a series of outcrops surrounded by spectacular cliffs and many unusual rock formations known as Danxia landform. There are a number of temples located on the mountains and many scenic walks can be undertaken. There is also a river winding through the mountains on which boat trips can be taken.