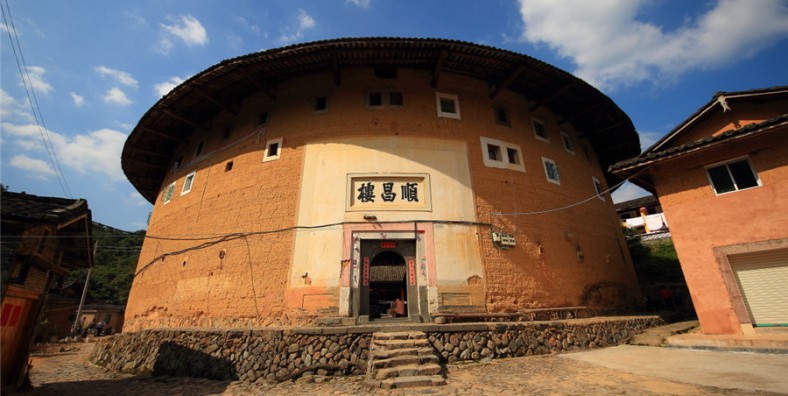 Why is Yuchanglou So Special?

Yuchanglou, or Yuchang Tulou (Chinese:裕昌楼), is an ancient building in Nanjing County. Built in 1368 in later Yuan Dynasty and early Ming Dynasty with an area of 2289 square meters, Yuchanglou is the existing largest and oldest round earthen building in Nanjing County.  It is famous for its sloping pillars, probably a manufacturing defect, and yet Tulou Yuchanglou has been standing for over 600 years!

A tulou is usually a large, enclosed and fortified earth building, most commonly rectangular or circular in configuration, with very thick load-bearing rammed earth walls between three and five stories high and housing up to 800 people. Smaller interior buildings are often enclosed by these huge peripheral walls which can contain halls, storehouses, wells and living areas, the whole structure resembling a small fortified city.

How to Get to Yuchanglou?

If you want to get rid of hustle of transportation and troublesome navigation, you can book a private tour package which covers visiting, dining and transfer from us. Our local tour guide and driver will escort you to Yuchanglou with speed and convenience, and take care of all the details. You just need to focus on travel.

By Bus: There are many buses to Yuchanglou every day in Nanjing County, it takes one hour’s drive.
Xiamen Hubinnan bus station has a bus to Yuchanglou at 8:30 every morning. It takes three hours.

What to See in Yuchanglou

Yuchanglou is a five-storey building with a height of 18.2 meters, a 1.8-meter-thick wall at the bottom and a fir wood structure inside. There are 270 rooms of the same pattern in the building, and each storey with 54 rooms.

Shortly after the completion of the Yuchanglou, the wooden columns in the corridor began to incline from left to right, with an incline of 15 degrees, which seemed to be crumbling. However, after hundreds of years of wind and rain erosion and numerous earthquakes,Yuchanglou is still there today.

Yuchanglou is most famous for its tilted pillars. Shortly after the completion, the corridor pillars of this earthen building became tilted. The maximum bevel angle of pillars is 15 degree. On the third and fourth floors, the pillars are tilted in clockwise direction, while pillars on the fifth floor are tilted in anticlockwise direction. Though looks like a tumble-down building, it has undergone numerous storms and earthquakes for more than 600 years and remains intact today.